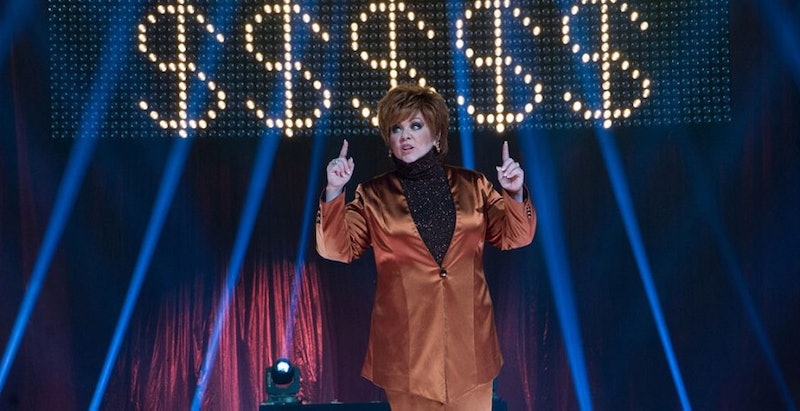 I thought I had a pretty good vibe on the characters Melissa McCarthy was most likely to take on, but she just blew me away with the newly-released trailer for The Boss , in which she plays Michelle Darnell, the richest woman in the world, who gets busted for insider trading. Even though all she has to do to make a movie hilarious is dip a pinkie toe into it, I'll admit that I've been kind of dismayed that, up until this point, many McCarthy roles feature her as a schlubby character who doesn't have her life together and whose sexuality and attractiveness is an open joke. Even the parts she writes for herself, like Tammy . McCarthy's real life success and self-awareness are both awesome and inspiring, but I've been jonesing for a while now to see those traits come through in a character.

So The Boss appears to be my movie! Like I said, McCarthy plays an extremely successful businesswoman, who, yes, did absolutely cheat her way to the top, but at least we're acknowledging that she's on the top. She's cutthroat, excellent at what she does, and doesn't apologize, which are three traits I know Melissa McCarthy is gonna hit out of the park. And the best part? The Boss was written and directed by McCarthy's real-life husband Ben Falcone, so, by giving her such a badass character to take a swing at, he's proving that he has as much — strike that, even more — faith in her as the rest of us.

Here are 17 moments in The Boss trailer when Melissa McCarthy looks terrifyingly hilarious.

1. When The First Time We See Her Is In Profile

2. When This Is How She Enters Her Speaking Engagement

3. When She Has The Cojones To Rock Not Just A Turtleneck, But A Sparkly Turtleneck

4. When She Refused To Get Arrested Without A Fight

5. When Her Lawyer Gave Her Bad News And, Instead Of Crumbling, Her Response Was To Huck A Tennis Ball At His Throat And Ask For A New Lawyer

8. This Very Calm And Terrifying Showdown In Which She Threatens To Put Cookies Up Another Lady's Butt

9. When She Teaches These Brownies Some Real Business Sense

10. All The Outfits Forever

11. When She Knows You're Going To Turn Out To Be A Lesbian Before You Even Do And She Doesn't Mind Telling You In Front Of Everybody

13. When She Teaches Her Girls About The Convincing Sales Trick That Is Death Threats

15. When Her Response To Getting Slapped In The Face Is To Giggle And Do It Back

16. When This Is Her Wreckage

17. When She Gets Truly Hands-On In Her Attempt To Make Over Kristen Bell

Oh yeah, because did I not mention? Kristen Bell is gonna be gracing us with her comedic chops in this movie as well. So, now you officially have zero excuses not to see it when it comes out on Apr. 8, 2016. Check out the trailer below.