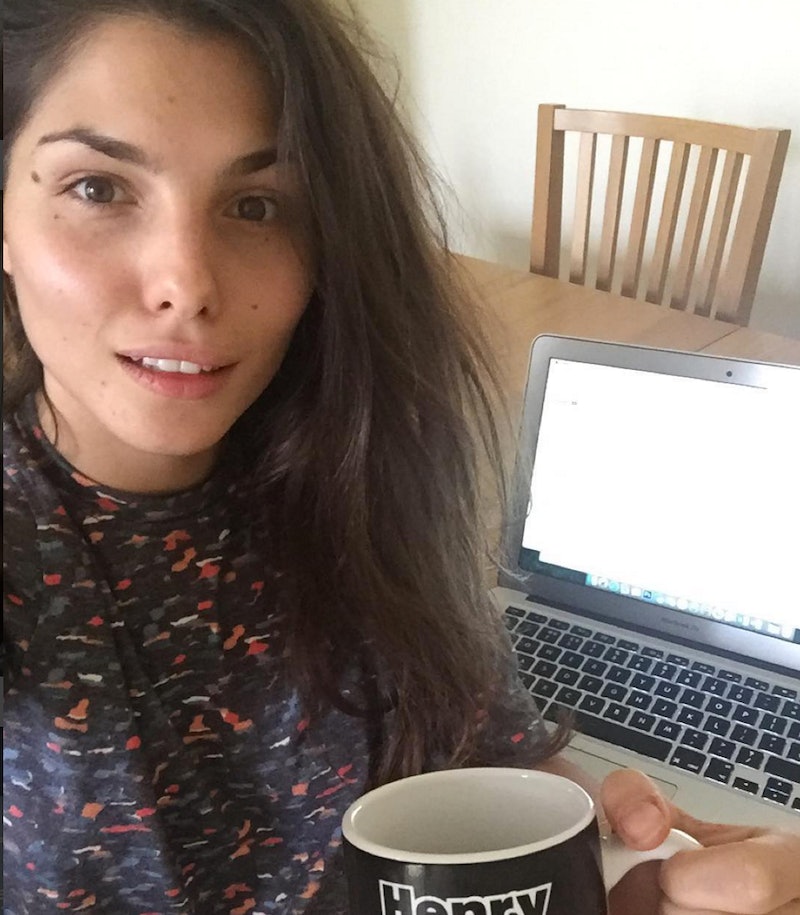 London-based model and writer Stina Sanders just lost thousands of Instagram followers. What could possibly lead to such a rapid decrease in social media popularity, you ask? Well, it's this simple: She started posting fewer photos of her glitzed-up model persona and more of her real life. And, apparently, not everyone likes it when women, especially Instagram celebrities, present themselves as real people. Fortunately, Sanders' Instagram provides a friendly reminder that women are in fact people, and that we're allowed to have feelings, thoughts, and bad days — despite the perfect versions of ourselves we feel pressured to present on social media.

The Daily Mail asked Sanders to conduct this experiment after 18-year-old Australian model Essena O'Neill quit Instagram to protest the value it places on unrealistic perfection. "Everything I was doing was edited and contrived," O'Neill said in a video announcing her decision. When Sanders, who has modeled for Maxim and FHM, also broke from her perfect Instagram image, her following dropped from about 13,000 to under 10,000, according to People.However, due to the press her new Instagram persona has received, her Instagram following has now skyrocketed to over 40,000.

Sanders tells Bustle that she changed her online image to challenge the superficiality that social media can encourage:

[The Daily Mail] asked me to share unglamorous/taboo photos that I wouldn’t even dare share with my friends and family. I usually post glamorous shots and I was up for the challenge because Instagram has become so fake, what with filters and how people are portraying themselves on the Internet. I’ve been judged all my life because I am a model — unfortunately it's a stigma that comes with the job. So I felt it was appropriate for me to reveal what is actually behind the mask and what actually goes on behind closed doors, rather than just the stuff that I want to share because it’s “pretty."

If you scroll through Sanders's Instagram feed, you'll see a variety of professional and real-life photos throughout, but a few taken over the past week stand out from the rest. One is from her therapist's office, where she admits she went "to sort out my anxiety issues." She added, "Depression and anxiety isn't something to hide away from. Get talking!"

Another post that may have stirred up some controversy featured Sanders removing hair from her upper lip with the caption "De-fuzzing Monday," reminding us all that models don't wake up the way they look in photoshoots.

If those weren't the pictures that drove away Sanders's more superficial followers, it might have been this one of her visiting the doctor for Irritable Bowel Syndrome. “To see a photo of my bowel movements and not me in a bikini must have annoyed a lot of them," she admitted to Tab.

Indeed, there are a few comments on that photo expressing distaste, including "Why do you do this?" and "Too much bye." But mostly, the comments were along the lines of "so many people have it! It's crazy that it's such a taboo topic" and "I've recently been diagnosed with IBS and it makes me feel so fat and unattractive. To see someone like you struggle with it too, makes me feel not so alone."

As for those who didn't appreciate Sanders's honesty, she has a theory: "Social media is a form of escapism. Why would anyone want to see reality when they can see that every single day?" she tells Bustle. "Why see real stuff when we can look at fantasy?"

It's troubling that some people will only follow women on Instagram if they conform to their fantasies of a desirable sexual object. When people only want to see women who fit the cultural idea of a woman with no bowel movements, body hair, or emotional struggles, they are promoting the notion that women are only worth our attention if they do what supposedly appeals to men.

But it's also encouraging that even more people appreciate Sanders's honesty about all the less glamorous aspects of her life. It's not surprising that people want to see someone real: By seeing other people accept their imperfections, we feel more comfortable embracing our own. It's these so-called flaws that make us human, after all, and being human is far more interesting than being an image on a screen.