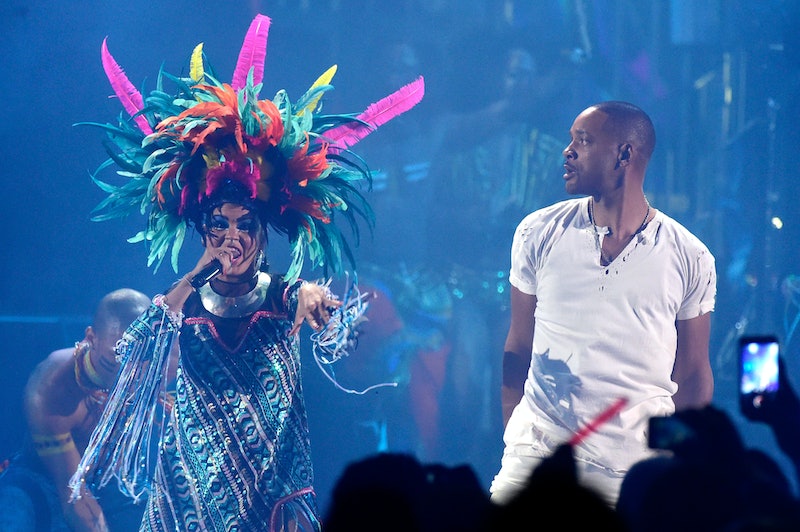 Will Smith is back! Well, Will Smith the movie star never went anywhere, but Will Smith — aka Big Willie aka The Fresh Prince — the rap star, left the game for a little while. On Thursday, Smith performed live at the Latin Grammy Awards in Las Vegas. He performed his new song "Fiesta," which is the first single the rapper has released in over a decade. Along with a return to the music industry, Smith will be working with his old friend DJ Jazzy Jeff on a new album and world tour. 2016 is sure to be a big year for the star.

Honestly, when news of his return to music was made public, I was less than excited to learn that the 47-year-old performer would be making a return to music. I am a huge fan of his past albums, but a new album doesn't feel like an honest body of work when he's been finding so much more success (sometimes) with his films. However, if this single is any indication of what's to come, then I was completely wrong. Somehow, after all these years, he's still got it. The music is lively and doesn't feel too young for him. In fact, it actually left me excited to hear more of his new work.

Even after all these years, all of Will Smith's best songs still have an impact, so let's reflect on them, shall we?

To this day, I'm not sure if anyone actually knows what it means to get "jiggy with it," but, back in 1997, it didn't really matter what it meant. It was a catchy tune that defined a generation and set Smith on the path to greatness.

If you haven't driven past the beach with the windows rolled down on a warm summer day while blasting this song in your car, then you haven't truly lived. No better song to kick off every summer season with than this.

This song was written post-9/11 about the war and terror happening in the world, and how a parent tries to explain that to their child. Lyrics like, "I really wish I could explain it, baby. It's just the world is kind of crazy, baby. Ain't no pretty way to paint it, baby. Don't cry, dry your eyes." It's a powerful look at the depravity in the world, and where we go from here.

Something about singing Spanglish in rap form was just so addicting. If Smith only sang this song on his world tour, I think it would be a success.

If you're thinking to yourself, "Robin Thicke and Will Smith? Well, that seems super random," then you would be correct. However, nonetheless, it works. It works so well. Everything about Smith's smooth verses, with the combination of Thicke on the chorus, makes this one of the best songs Smith has ever released.

Smith is known for being a loving and doting father, and this song proves it. It's the sweetest song written about a love between a father and a son, and it gets me every time.

Smith has a knack for making some of his best songs from his movies, and this is no exception. This funny song about the Men in Black definitely helps make the movie a classic.

You can't go wrong with any song that features a member of TLC. Especially when that member is the late rapper Left Eye. Plus, the song also features an adorable nickname like "Big Willie."

Smith's music may not be timeless — no one uses jiggy any more — but it still provides some of the best jams for any event. Hopefully, his new album will leave the world with a few more gems to add to the list, and will allow him to once again claim his throne as the rightful Fresh Prince. Check out the performance below.