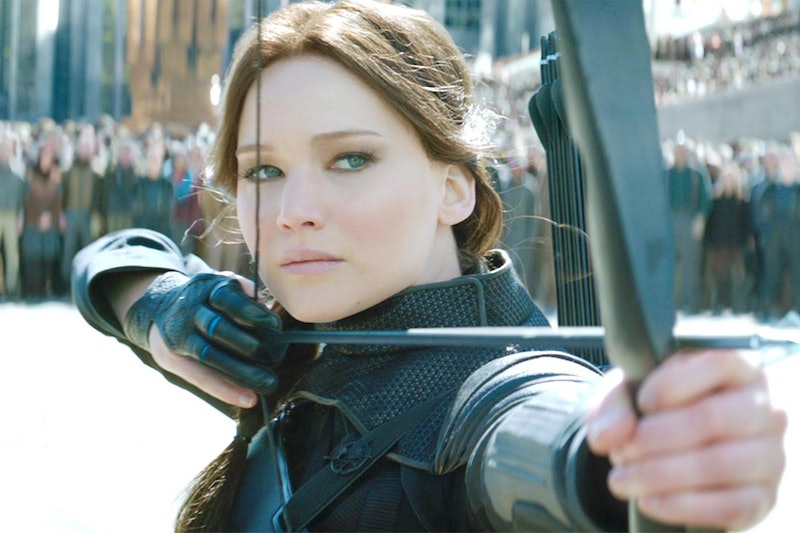 Like many, I first met Jennifer Lawrence by way of her Oscar-nominated performance in Winter’s Bone. (Not watching The Bill Engvall Show is a something I never thought I'd regret.) I agreed with everyone who said that Lawrence in Winter’s Bone was the acting discovery of the year. That this young woman’s command of drama and intensity, her knack for playing grim and severe, would ordain a major presence in Hollywood cinema. Oddly, I was both right and very wrong. Jennifer Lawrence is a comedic genius, to the point where grim and severe just seems weird sometimes.

Lawrence snagged a pair of smaller roles, occupying supporting parts in the Jodie Foster-directed and Mel Gibson-starring The Beaver and the romantic drama Like Crazy, before returning to the spotlight: first, and duly formidably, in the superhero ensemble film X-Men: First Class, but more prominently at the head of The Hunger Games. Her adoption of franchise heroine Katniss Everdeen would cement Lawrence’s position as “movie star,” spanning beyond the three additional films that’d come out over the next few years. But it would be Lawrence’s adorkable personality that would cement her position as “celebrity.” Through that, she would reveal a character very different from what we’d seen from her in Winter’s Bone and The Hunger Games. Different, but no less powerful.

At some point, Lawrence began showcasing a class of quirks we’d now consider to be irreversibly tied to her name. Her clumsiness, her foot-in-mouth disease, her passion for pizza — all rungs on a ladder of screwy, awkward, wholly positive charm that shines through via late night talk shows, red carpet interviews, and other such high-profile events. These quirks, along with her investment in social justice across the gender divide, are what many of us think of when we think of Jennifer Lawrence, and, what’s more, what many of us love most about her. Every other week, the Internet celebrates the latest episode of J. Law’s tabloid-friendly silliness, or her passionate essays demanding social progress. The image we have of Lawrence is one bright, funny, and humane. Oddly enough, an image that stands in direct contrast to her regular big screen shtick.

Katniss Everdeen is anything but bright, never funny, and humane only in the most Darwinian sense. Similar severity and darkness envelops her characters in Winter’s Bone, the horror-thrillers House at the End of the Street and The Devil You Know, and the drama Serena. Even Silver Linings Playbook, much loftier and more joyful than the previous pictures, gives Lawrence a cynical, grimacing character in the recently widowed, depressive Tiffany.

Silver Linings Playbook, the actress’ first union with David O. Russell, does often play Lawrence’s glowers for laughs. In fact, Russell is the only director so far to tap into Lawrence’s well-documented liveliness. We saw this on display in American Hustle, and I expect see the very same in the aptly titled Joy. In the meantime, we have the final Hunger Games movie, Mockingjay, Part 2, to offer the opposite end of Lawrence’s acting spectrum. One that I just can’t quite watch anymore, in the aftermath of my reassessment of what Jennifer Lawrence “is.”

When I think of the 25-year-old star and celebrity, I think of the same kooky mannerisms and comical outbursts that anyone else might. In expecting this level of energy from Lawrence, whether in telling a spirited joke or penning a strongly-worded essay, I’m setting myself up for disappointment when I approach a Hunger Games movie, or a drama in the vein of Winter’s Bone or Serena.

Of course, it is the actor’s goal to remove their external life and persona in the delivery of a role, and the audience’s expectation that they succeed at doing so. But Lawrence’s celebrity is so immense, and so wholly beloved, that it’s becoming harder and harder to watch her in a movie without watching her in a movie. When I look at Mockingjay, I think about how much I’d rather be seeing this beacon of energy employ the class of character for which I love her most. It would be inappropriate and uncalled if Lawrence were bring that vibe to Katniss, I know. But why be so stoic when you’re so much more at home sky-high?

Making this even more irrational is the fact that I’m not basing that last conclusion on Lawrence's upbeat roles — her more jubilant ones, like in American Hustle — but on her real-life, or as close to real-life as Hollywood lets you get, persona. Her celebrity. Her late night talk shows. Her red carpet interviews. The Jennifer Lawrence that I’ve become unable to separate from the actress. I love that Jennifer Lawrence, as do most. But, unfair though it may be, it’s that very love that makes me glad that Mockingjay, Part 2 is the final time she'll appear as the more stoic Katniss.