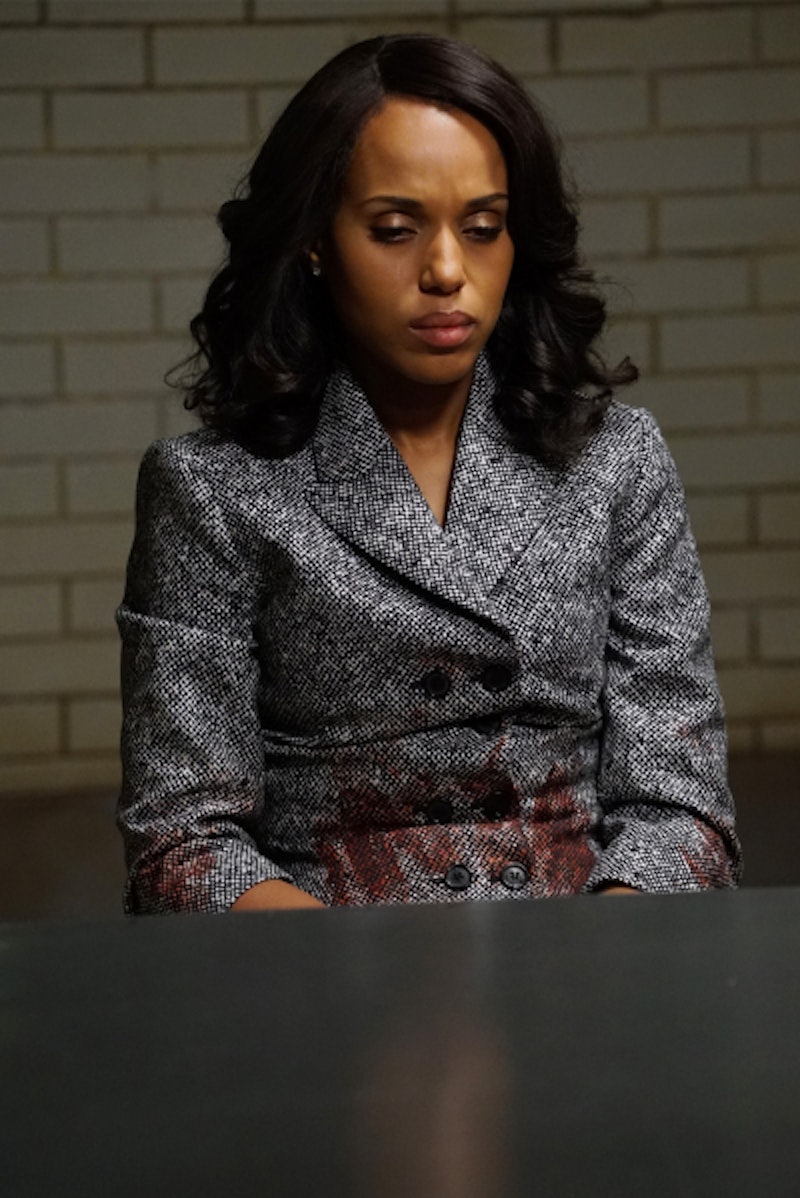 On the winter finale of Scandal, Olivia Pope had an abortion. It’s not the first time abortion has been featured on TV, but there was something special, even unique, about how this particular abortion was featured: There was no sadness about Olivia Pope’s abortion.

There was none of the traditional fanfare we've come to expect when an abortion is depicted in film or TV: no scene of Pope in the bathroom, pants around her ankles, peeing on a stick and looking fretfully at her reflection in the mirror. There was no tear-filled “I’m pregnant” confession. Though the episode began with a warning that the show featured "adult content," there was no violence. There was no moral discussion about what Pope was doing, fraught with characters who voiced carefully worded concerns, ensuring the audience that our heroine had thoroughly considered both sides, fully considered the possibility of carrying the child to term, and decided that this was the (sad, heartbreaking) decision she had to make.

The lack of all these tropes that we've come to expect, even on progressive TV shows, is what made the scene so revolutionary. The fact that this episode of Scandal treated abortion like what it is — a medical procedure that all women should have access to, simply because they do not wish to be pregnant — was incredibly important.

Depictions of abortion on TV have often, in attempts to come off as even-handed or not offend viewers, ended up reflecting the agenda of the politicians who are trying to ban it. In recent years, we have seen a sharp increase in legislation restricting a woman’s ability to get an abortion, including increasingly lengthy waiting periods, parental consent restriction, and invasive and unnecessary ultrasounds. Some anti-abortion legislation has even gone so far as to propose that women be required to listen to the beating heart of the fetus and force doctors to read a detailed script reminding her that the procedure will “terminate the life” of the fetus. These restrictions and proposed laws all seem to hinge on the same line of thinking: that if a woman was forced to truly ponder the reality of abortion, she wouldn't go through with it.

This narrative — that every women’s choice to have an abortion is fraught, convoluted, overwhelming — often bubbles up in television portrayals of abortion, which tend to depict the decision to have an abortion as extremely melodramatic. From its first television appearance on Maude in 1973 — where the title character terminated an unplanned pregnancy — abortion on TV has generally been approached with very-special-episode gravitas. The nineties and early 2000s saw an uptick of discussion of abortion on TV, but not a rise in TV portrayals of the procedure itself, with multiple characters thinking they wanted an abortion, before conveniently fleeing clinics and deciding to keep their pregnancies at the last second (see Andrea Zuckerman on 90210; Gail Leery on Dawson’s Creek; and Miranda Hobbes on Sex and the City.)

And while the last few years have seen a rise in TV characters actually wanting and receiving abortions, these plot lines are still often are used as a convenient way to insert drama and pathos into a storyline. Even Shonda Rhimes' stalwart, Grey’s Anatomy — which features Dr. Cristina Yang, one of the most feminist characters on television — could not avoid the overdramatic presentation when the issue of abortion came up. Yang had an abortion, as she had always planned to in the event she became pregnant — only to have the whole event blow back at her her, with her then-partner theatrically screaming that she “killed our baby” in front of her friends.

Similarly, Parenthood — a show that received much praise for its handling of abortion — still fell into the trap of treating abortion as a source of melodrama. Drew, whose girlfriend had an abortion after accidentally getting pregnant, sobbed while his mother hugged him, and confessed to his sister that part of him did not want his girlfriend to go through with it.

The closest we have come to breaking out of this rut in how abortion is depicted on mainstream TV was an episode of The Good Wife , which saw two high school kids seek out and receive an abortion, and continue on with their lives to attend college. But even then, the story arc was not about the abortion itself, but instead about how series lead Alicia Florrick would “deal” with the aftermath of knowing her son’s girlfriend had an abortion, both politically and as a mother.

These are the storylines we’ve become used to. They play into the narrative that so many women find themselves pressured to adopt: that while abortion can be necessary, it is still “bad” and we should make every attempt to avoid it. We don't just see this attitude on TV — we see it in real life, too. This summer, when Planned Parenthood came under attack for a series of videos (which were ultimately proven to be edited and manipulated) supposedly proving that the nonprofit profited by selling fetal tissue gathered during abortions, many politicians sought to eliminate federal funding from the organization — and many people reacted by reminding the nation that Planned Parenthood does more than provide abortions. Though this attitude may have been simply based on panic at having funding for the organization cut, it does engage this familiar narrative — as if providing abortion services were something that should be overlooked, in favor of focusing on contraceptives, STD testing, and other elements of women’s health that we’ve deemed acceptable to discuss. Pay no attention to the abortions behind the curtain.

Legal threats and a pop culture attitude that remains squeamish about abortion come together in this narrative. Though by no means the only story, it is the dominant one, the one that those of us who are pro-choice are told to accept. Abortion will impact you in ways you can never anticipate, these narratives say. Abortion is tearful and hard and makes you search your soul in the dark of night. These are the stories we are told, over and over.

This is why, the moment I saw the curettage last night, I was fearful. Here, I assumed, was another show that would focus on the tears and the struggle and how hard abortion was for women. I steeled myself for the regret, the confession, the inevitable fallout. I waited for the tears, the last-minute change of heart, the convenient miscarriage — all the avenues showrunners often bend over backwards in order to incorporate the procedure into plots, to put as much distance between their beloved characters and abortions as they can.

But, to my great surprise, none of that happened. Instead, Olivia’s abortion was treated in a straightforward fashion. The doctor works methodically, like a dentist filling a cavity. And when we pan up to Olivia, her face is not tearstained. No, she is not crying. In fact, she is smiling.

We need this story, and more stories like it. We need to frame the narrative of abortion differently, both in mainstream pop culture and in much of our mainstream political activism. We cannot squirm, pause, and use euphemisms when we say the name of the medical procedure we are demanding. We cannot continue to only accept TV depictions of abortion that depict the procedure as inherently heart-wrenching. Because if one in three women will have an abortion in her lifetime, you can be damn sure that some of those women are smiling.

According to a 2015 study conducted by the University of California San Francisco School of Medicine, 95 percent of women who have had abortions do not regret having the procedure. Why can’t we be happy for them, the women who have had an abortion and experience no regret? They are not trapped. They are not sad or horrified by their abortions. They are not struggling with their choices, wrestling through their days, just waiting for the moment of catharsis when they can admit their shame over they’ve done. They might even be, dare I say, happy with their choice.

Warning: This program features a woman who wants to maintain the life she worked so hard to build, and won’t be beholden to a fluke in her birth control.

Warning: This program features a woman who gets to live the life she wants to live.

Before she has her abortion, Olivia is in the waiting room, watching coverage of Mellie Grant’s filibuster to keep Planned Parenthood federally funded. The newscaster declares its success and then says, “We now return to It’s A Wonderful Life, already in progress.”

Because isn’t that exactly what an abortion can be for many women? A return to their wonderful lives, already in progress.