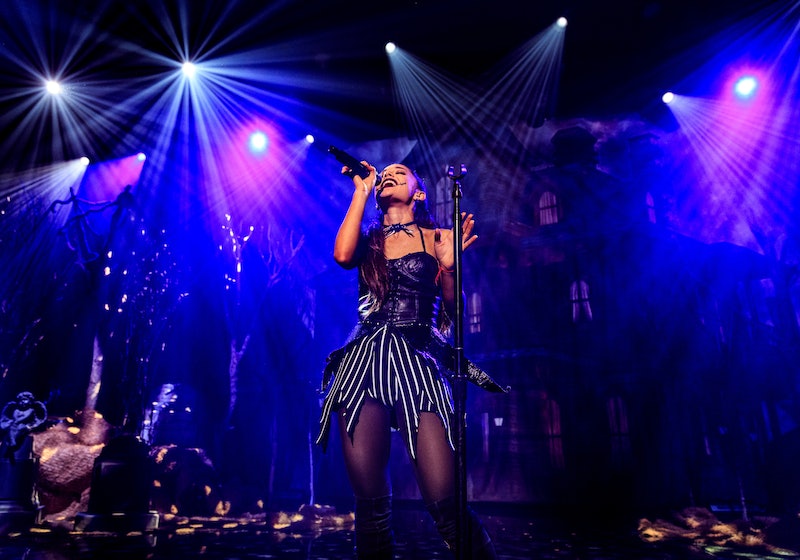 The best part of any music-related award show is the wide range of performances. From rap to pop, country to rock, the American Music Awards rarely disappoint with the live numbers, and this year was no different. Ariana Grande performed “Focus” at the American Music Awards, and man, was she awesome. The first single off her new album, Moonlight, “Focus” was produced by Max Martin, aka the man who helped make Britney Spears who she is today. Not that Grande needs any help with her music, but having Martin on your team never hurts. According to Fuse, “Focus” debuted at No. 7 on the Billboard Hot 100, which is the first time that Grande has hit the Top 10 alone. She’s been there with Iggy, Jessie, and Nicki, but not solo, so congrats to her!

Grande went full-on platinum blonde and practiced some pretty sultry dance moves for the video for “Focus," so I bet most people would be wondering if she would keep the hair for awards show season. I mean, her hair is her thing — dark, shiny, and always in a high pony or half-up, half-down. The blonde is a big departure, and apparently so is the rest of music on Moonlight. In an interview with UK radio station KISS, Grande said that “Focus” is the only track with the big, brassy sound we’re used to from her. With that introduction, I can’t wait to see what the rest of the album sounds like. Grande certainly showed a new side of her during the American Music Awards performance — she totally rocked it all.

Grande started out with a slow, big-band version of "Focus," and it really made me curious as to what a whole album of her singing that genre of music would be like. It would probably be awesome, right? Like when Christina Aguilera did her whole Back to Basics deal. Anywho, at the AMAs, Grande was brunette (she ditched the platinum blonde of the single's cover) and brassy and bold in her big-band interpretation before moving into the more traditional telling of "Focus." It was classic Grande — retro-styled set, beaded mini dress, a few backup dancers, and a whole lot of attitude. Grande has always packed a punch, whether you're listening on the radio or watching her live, and her AMAs performance was no different.