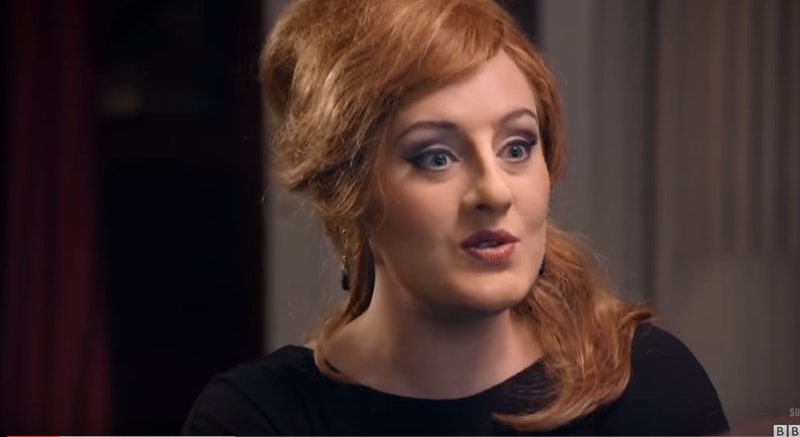 It's basically a well-established fact at this point that Adele is the best in pretty much every way possible. She's an incredibly talented and emotive singer and songwriter, totally down-to-earth and not caught up in the trappings of fame, and she also has an amazing sense of humor. That natural wit got a chance to shine in her new U.K TV special, Adele at the BBC , which aired Friday night in celebration of the release of her new album, 25. In order to prank a group of fans, Adele underwent enough of a change in the hair and makeup chair that it left her looking only vaguely like herself. The prosthetic chin and nose she wore was perfect cover as she transformed into a character named "Jenny" and attempted to blend in with a group of Adele impersonators who believed they were taking part in a reality show hosted by Graham Norton.

What follows is golden, of course. "Jenny" pretends to be terribly nervous and even comments to the other contestants that Adele certainly has taken her time putting out a new album. She's the last to perform, leaving the other ladies and gentleman sitting in the audience to watch her performance. After missing her initial cue, "Jenny" begins to sing, and there's just no disguising Adele's voice. It takes the other competitors only moments to realize that they may have been had and that "Jenny" might actually be Adele herself.

The reaction from the small audience is one of bemusement, followed by shock and excitement. By the time "Jenny" reaches the penultimate chorus of "Someone Like You," they're all singing along and several of the women are in tears watching their idol perform just a few feet away from them. It's basically one of the best celebrity pranks ever and also one of the most endearing, especially since Adele takes the time to meet the "contestants" and give them big hugs before singing with them for real. Ugh, could Adele be any better?

To be honest, I can't imagine what I would do if I found out Adele was singing right in front of me. I'm not necessarily very star-struck, and the unique quality Adele has is that she sorta just seems like everyone's best friend. You don't necessarily start screaming or passing out when you meet her, but you'd likely feel a huge sense of camaraderie and adoration. The fact that she's just so nice helps things, as well. Either way, I'm pretty sure this is my favorite celebrity surprise ever, and Jenny was one of the best alter egos.