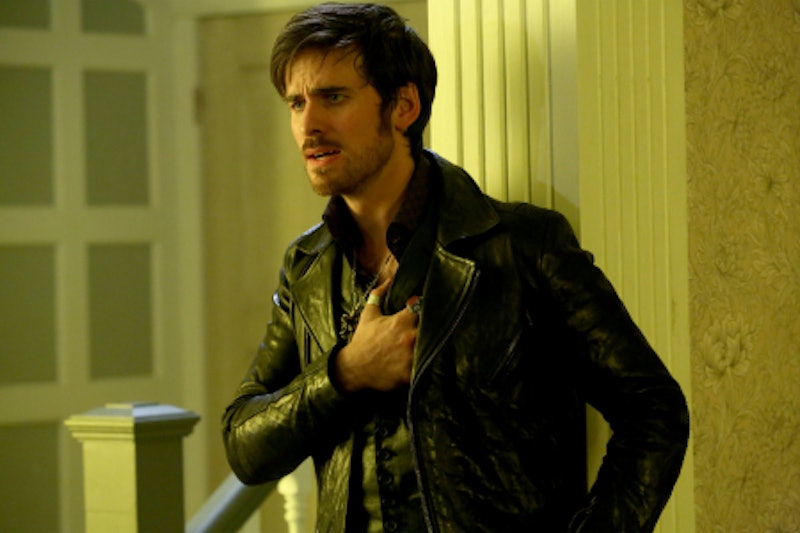 If you're anything like me, you were likely left groaning in frustration at the end of Once Upon A Time's eighth episode of the season, "Birth", last Sunday night. A whole lot happened during the episode, that's for sure: Zelena welcomed her daughter, thanks to Emma's enchanted onion rings; Emma and Regina came thisclose to finally sharing their painfully obvious feelings for one another until Snow, Charming, and Hook interrupted; oh yeah, and Emma turned Hook into a second Dark One because he had some gash in his neck from an unseen sword fight that was going to kill him and she didn't want that because she's already lost so many people in life, even though he basically begged her to let him die (and she definitely should have). So now Killian's the second Dark One, and I don't have to tell you what a disaster that one is, particularly since Hook has no problem embracing the darkness, from the looks of things.

Emma becoming the Dark One was a gesture of love — she wanted to save Regina's life and also preserve all the work the former Evil Queen had done to redeem herself and ensure she still had a chance at a happy ending, whatever that entailed — and the Savior's journey into that darkness has been complicated and interesting because it's real. Emma has light magic and is good at heart, hence her struggle to overcome the darkness that wants to overcome her. It was that lightness within her (and quite a bit of selfishness, to be fair) that pushed her to save Hook's life the only way she could. Only she couldn't have foreseen at that point that Hook being a Dark One was basically going to out him as the unreformed villain he's always been, because he absolutely loves it.

As the Dark Swan herself, Jennifer Morrison, explained to Entertainment Weekly, "As soon as the Darkness is within him again, he goes straight back to his vengeful pirate-y self, pre-Emma Hook, basically. He’s operating from the Darkness, instead of the goodness that he’s fought for for so many hundreds of years. In the immediacy of it, he’s very resentful, but he’s operating out of that Darkness that’s within him."

I hate to break it to Morrison (and Emma) that Hook hasn't been "fighting for goodness" for hundreds of years. In fact, he's been an absolute jerk — and that's putting it kindly — for several centuries and only put on his good guy mask once he finally wore Emma down and got her to go out with him. The rest of the time, he was busy double crossing people and killing them for no reason, before taking their rings as trophies of his lack of regard for life and absence of a conscience. But now that Hook has infinite dark magic with which to perpetuate his one-handed vengeance, we're in serious trouble here.

Now that Zelena has shown Hook the truth about what Emma did to him, he's ready to take his anger out on her... despite the fact that not five minutes earlier, he'd insisted that he'd always love her and that nothing couldn't be forgiven. Ah, true love! Not only has he got the means and the desire to hurt Emma — who, let's be real, was never of any interest to him unless she was playing his perfect blonde Savior — but he's also finally got a real chance to go after Rumple over the death of Milah all that time ago, and from the previews for Episode 10, it looks like that's still fresh on his mind. Talk about holding a grudge.

In a way, this development is a good thing, particularly if you're not a Captain Swan 'shipper and have grown long tired of having this bland "romance" shoved down your throat on a weekly basis while the actual relationships that are worthwhile and that you actually want to see suffer for it. No doubt Emma will go through a "Hook's only being a jerk because he's the Dark One and that's my fault" thing for a while, but hopefully Regina will step up as Emma's voice of reason once again and point out that if Emma was able to fight the darkness (well, mostly) and avoid killing a bunch of people, then Hook's got no excuse, either, other than that he's just a violent drunk and a waste of time. In other words, I'm hoping this development is the last nail in the Captain Swan coffin so we can bury this nonsense for good.

In another sense, this could be the best thing the writers could ever do for Hook's character. After all, Killian Jones was always meant to be a villain, and he was so much more enjoyable to watch when he was at his very worst. Heroes can't exist without villains to fight against, and that's where Hook should remain if he wants to be at all relevant. Hopeless romanticism doesn't suit him — let's get back to the good old days, shall we? Hook doesn't have to pretend to be some reformed character, Emma's free to finally voice that "truth" Regina was wanting her to see (hint: their happy endings have been in front of them all the time with each other), and maybe Emma can even start paying attention to the other, more important man in her life again — her son, Henry. This way, everyone wins.