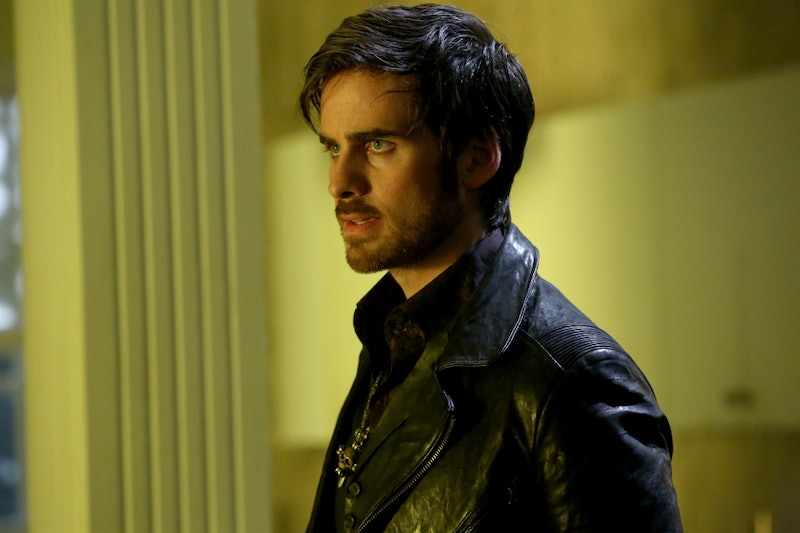 On Once Upon A Time this season, the Dark One version of Emma Swan has gone all over Storybrooke keeping her master plan for Excalibur a secret from everyone, even her love, Hook. Last week, Emma reunited the Dark One dagger with Excalibur, and everyone else in town assumed it was part of her plan to destroy light magic once and for all. However, in the first half of this week's two-hour episode, "Birth/The Bear King," Emma's true plan was revealed: She wanted to save not only herself from the darkness, but Hook as well. Why's that? Well Hook is a Dark One on OUAT now, too, and it could mean the end of their relationship.

Hook spends most of Sunday's episode looking for answers as to what Emma is doing and why she's doing it. Early on, when Emma rescues Hook from Arthur, she tells Hook that all of her plans are for him. For insight into being a Dark One, Hook goes to Mr. Gold, who tells him, "If you want to know what Emma Swan is after, find out what she's atoning for." So, if we put the pieces together that Emma is atoning for something, and she's doing everything for Hook, that means she must have done something to Hook, right? Right.

At the end of the episode, Hook's memories from their time in Camelot are restored by Zelena, and it turns out that when Emma heals a cut on Hook's neck from Excalibur, it's only temporary. When she tries to reunite Excalibur with the Dark One dagger, the cut returns even worse than before. To save Hook, Emma must tether him to Excalibur, but Merlin warns that to do so would create another Dark One, and Emma would finally submit to the darkness. Forced to choose between losing the love of her life and unleashing another Dark One on the world/submitting to the darkness, Emma makes the only choice a savior could make — she chooses Hook (of course!).

Back in the present, Zelena reveals that Excalibur — which had Emma's name on it because of her role as the Dark One — also has Hook's name, Killian Jones, inscribed on it, confirming that he is also a Dark One. However, although Emma taught Hook that any sin can be forgiven so long as you have love, can her sin of making him a Dark One be forgiven, or is this the end of their relationship? Given all the shady things Hook has done in the past, some of which he relays to Emma in this episode, maybe these two can work things out. But, that hope may just be wishful thinking because if there is one thing Once Upon A Time has taught me, it's that a relationship can only sustain so much darkness — and two Dark Ones does not a happy ending make.

More like this
John Mulaney & Olivia Munn's Relationship Timeline Features The Comedian's First Father's Day
By Jordyn Tilchen
The ‘Love, Victor’ Showrunner Gave Fans Hope For A Possible Spinoff
By Brad Witter
Legacies Showrunner Said There Is Still Hope For More Vampire Diaries
By Gretchen Smail
Everything You Need To Remember Before Westworld Season 4
By Brad Witter
Get Even More From Bustle — Sign Up For The Newsletter