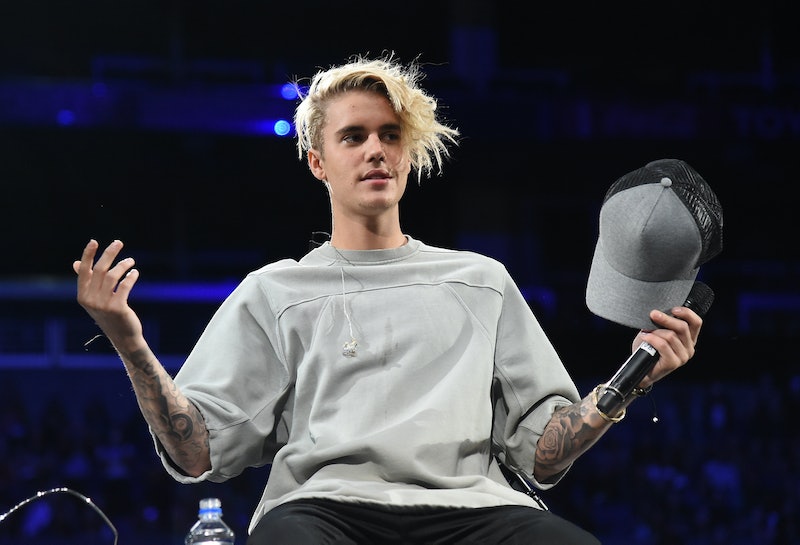 "Is it too late now to say sorry?" It seems like Justin Bieber may be taking one of his own lyrics to heart, as this weekend, he turned heads when he was spotted out with a certain ex-girlfriend. HollywoodLife reported that on Friday night, Justin Bieber and Selena Gomez were seen together at the Montage Beverly Hills Hotel, and it only gets more surprising from there. Reportedly, an onlooker was able to capture a video of Bieber singing to Gomez during their reunion. The Purpose singer serenaded Gomez with two songs that will make you green with envy — or at least, that's the effect they had on me.

Many fans are likely confused by the pair's sudden hangout, because their breakup was just as public as their relationship, and even when apart, they send confusing signals. There's always speculation about each of the star's songs being about the other, they released the single "Strong" together in October, and recently Bieber told Ellen DeGeneres of a reunion, "so it could possibly happen," however Gomez confirmed to E! News on Nov. 11 that she is single. Whew. That's a lot to keep track of. And now, we have to add this meet-up to the equation.

Eat Pray Photo photographer Lindsey Cavanaugh caught Bieber's surprise appearance, as well as the reunion on video. Before Gomez's arrival, "What Do You Mean?" singer played a heartfelt version of his popular song "Sorry" at the hotel bar, which you can watch on Cavanaugh's Instagram.

If that near-perfect vocal performance made you melt, then I'm not sure what's going to happen to you when you see Bieber serenading his former love with a performance of "My Girl."

I don't know about you, but I would not be able to retain my sanity if JB sang "My Girl" to me in front of an entire hotel bar. But how did Gomez feel about it? What does this reunion mean? It's certainly not confirmation that the two are back together, but it does reveal one important thing. Despite all of the ups and downs that Bieber and Gomez have endured, they still remain in each other's lives.

It's a sign of maturity that no matter what happened in their past, they apparently can still be friends — apparently, the kind of friends who serenade each other on a random Friday night.