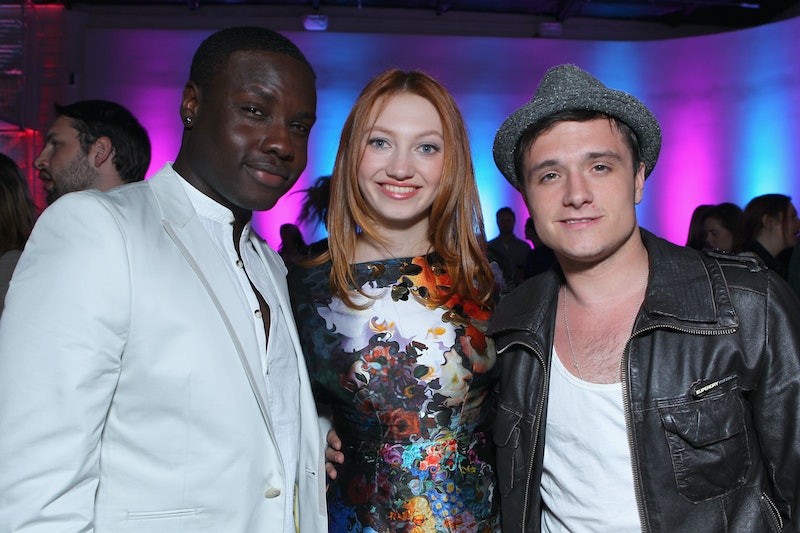 Dayo Okeniyi has had more luck in his first year in Hollywood than many actors have in their entire career. The 25-year-old starred along side Oscar-winning actress Jennifer Lawrence in The Hunger Games, he's been an on-screen aid to Justin Timberlake in Runner, Runner, and he played Marcus, the beau to Brie Larson's character in one of the year's most acclaimed indie films, The Spectacular Now, on DVD Tuesday.

Born and raised in Nigera, Okeniyi attended Nigerian boarding school until high school, when he transferred to a "conservative" private school in Indiana. But unlike his Spectacular Now character, Okeniyi was not an overachiever. "The older I get, I’m growing into my overachieverness," Okeniyi told Bustle. "Back when I was 17 or 18, I definitely was not the Marcus of my school, believe me. I look up to Marcus a lot, he was the guy in high school who was just perfect at everything, sports, class president, all when you were scratching your head going, 'What do I want to do with my life?' When I found out that I wanted to be an actor, what I wanted to do, it brought out the overachiever in me."

The Spectacular Now follows Sutter Keely (Miles Teller), a hard-partying high school student whose priorities in life are challenged when he meets a quirky, "nice" girl, played by Divergent's Shailene Woodley. Okeniyi's casting in the James Ponsoldt directed indie film came after his first big — or should we say huge — break, a role in 2012's The Hunger Games. Okeniyi played Thresh, the district 11 tribute who enters the games along side ill-fated Rue.

"The Hunger Games was my first studio film," said Okeniyi. "Outrageous — I know. I’ve been in LA for a year and a half and I’m still reeling. It was just perfect place, perfect timing. I moved to LA with the 20 year plan of not working at all, but things just kind of happened."

While all of the tributes, except District's 12 Katniss and Peeta eventually perish in the arena, it's Thresh who dies second to last. But unfortunately (or fortunately, depending on how you look at it) the audience doesn't get to see how Okeniyi's character passes.

"Me and Alexander Ludwig [who played Cato] talk about this all the time," said Okeniyi. "Because I remember on set, there was supposed to be a fight between the both of us in the movie, but we never ended up shooting that portion, so we talked for hours and hours and hours about what could have happened. There were so many possibilities, but according to Suzanne Collins I was killed by the mutts. I would have loved to of filmed that."

And because the film was composed largely of teenage actors, there was plenty of horseplay on set. "Everything that comes out of Jennifer Lawrence’s mouth is a riot, she’s just the funniest person ever. To work with Jennifer Lawrence, an Academy Award winning actress, that was a huge highlight." Okeniyi said. "It was just like the best summer camp experience ever, but you’re making a movie and getting paid. There were a lot of young people so of course there were a lot of pranks. You'd get to your trailer, you search for your clothes for an hour only to discover their in the fridge," he said.

And while Okeniyi enjoys acting, he's also just like the rest of us, a huge movie nerd. "I just saw The Hobbit in 3D and I lost my mind. I thought I was in Middle Earth, you don’t understand. It’s weird because, the veil on movie magic has been lifted, we know how everything is done now, if you go online you can watch every behind the scenes video, but for some reason when you go to the theatre you can have an experience where you’re completely immersed," he said. "There’s something magical about that. Like, I know how this is made, I work in this industry, but I still am romantic about movies. I thoroughly buy it."

And just like us (actually, maybe more than us), Okeniyi is addicted to Netflix. "Oh man House of Cards, I just completely devoured that," he spilled. "Walking Dead, Boardwalk Empire, Breaking Bad... I watch a lot of television, anything on HBO, Game of Thrones, Nurse Jackie. I steal from all the great actors. I watch all these shows and I’m like, 'I’m gonna steal that performance, I’m gonna steal that, I’m gonna steal that.' Being an actor is the one job where you can plagiarize emotion and get away with it."

Having lived in Los Angeles for less than two years, Okeniyi is still getting used to the L.A. way of life, mainly, the traffic. Long car rides to auditions, to set, and even to the basketball court to play a game with friends on the weekend can be a seemingly never ending excursion. "When I drive, I listen to classic music, and nobody knows about that... They’re gonna know now I guess," he laughed. "But when you’re driving through ridiculous traffic, the best thing to do is listen to classical music. It’s my guilty pleasure. And then when people cut you off in traffic, it really calms you down."

Outside of classical, the actor listens to "all types" of music, including the King Bey herself. "She just steals the game. Who can do that?" he said, referencing Beyonce's latest album drop, an unannounced surprise she released in December. "Who can drop an album, with like, eighteen tracks without promo? Like 'Oh, hey, by the way, I’m dropping an album today, bye.' That’s crazy! It went gold that day, and that’s mental," he said.

"For a long time the music industry was really worried that people were stealing music as opposed to buying music. But I just really respect not bitching about the situation — what’s the saying? Desperation is the mode of invention, or something like that? I just appreciate people who are smart and work hard and try to think differently and I love the way she did that, and everything that it stands for."

Next up, Okeniyi will star alongside Alex Pettyfer and Gabriella Wilde in Endless Love, a romantic thriller out on Valentine's.