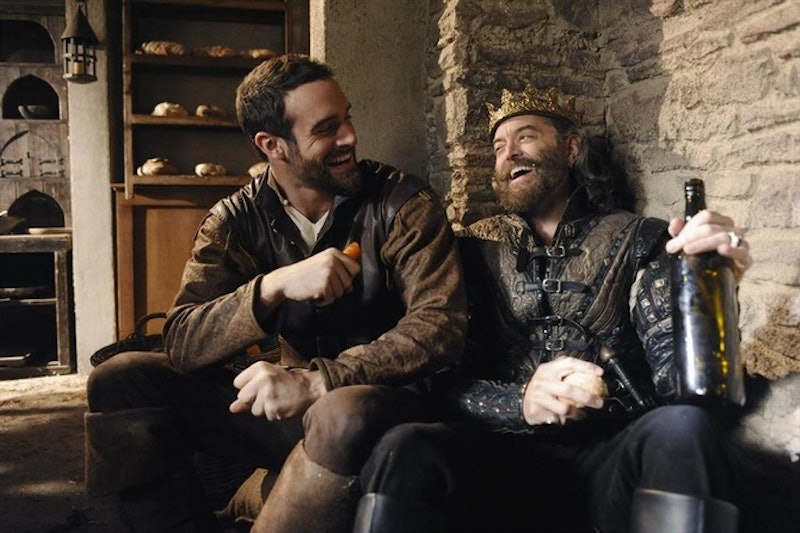 If you had to think of one thing that would make ABC's musical comedy Galavant better, what would it be? You were thinking pirates, right? Well, Pirates are exactly what are on offer in the Galavant Season 2 trailer as Galavant and King Richard hit the high seas with what appears to be a band of mischief makers. Remember, when last the show left the duo they had been sent away from the kingdom, and Season 2 appears to be the story of how they make their way back just in time to save the day. Hopefully, they will get back in a hurry because Madalena and Gareth are not the most benevolent of rulers. In fact, they are downright scary.

Elsewhere in the teaser, there are promises of "big pimpin'" (it's uncanny how on point the medieval slang is on this show), a whole lot of slapping, and the smallest glimpse of Galavant and Isabella together again. Hopefully, this means Isabella's icky betrothal to her cousin will be swiftly ended via an empowering musical number. In addition to the first teaser, Entertainment Weekly also offered up a hilariously perfect Galavant Season 2 poster featuring the show's heroes: Galavant, King Richard, and... a horse?

I expect great things from that horse, including dancing if ABC truly wants me to have nice things. The legendary poster aside, the biggest question still lingering after watching the teaser is what will become of Galavant's buddy Sid? He put his own life on the line for the sake of his friend's last season and was left in danger in the process. While everyone else escaped, Sid was left behind to face Gareth alone. That is not an enviable prospect for anyone, but goes double for the sweet Sid.

Galavant fans will just have to be patient a little longer before they find out. Season 2 is set to premiere on Sunday, Jan. 3. Until then, I recommend playing the teaser on repeat to get your Galavant fix, or belting out the ultra catchy theme song. Those silly pirates don't know anything. There can never be too much of the theme song. It is as legendary as its subject at this point.

Check out the teaser below. It may be short, but it is packed with little nuggets to keep you theorizing, like who is in the bath? Did pirates ever really have choreographed dances on the high seas? And no, seriously, where is Sid?