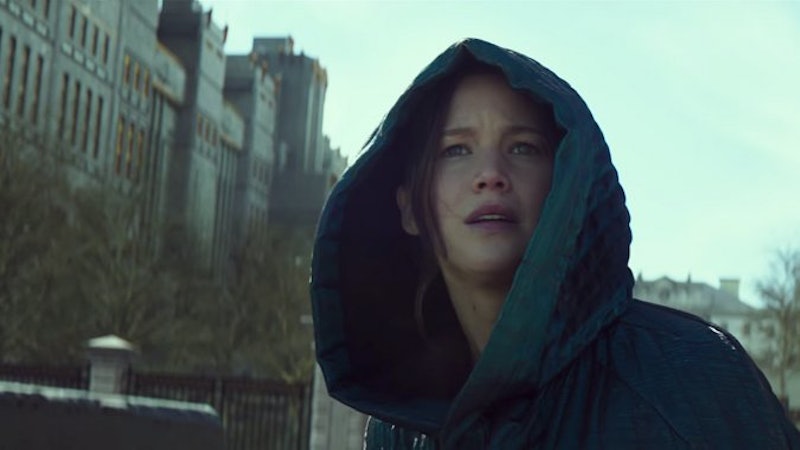 Those who are reeling after seeing the final Hunger Games movie might be confused by a major ambiguity. In Mockingjay, Part 2, bombs are dropped outside President Snow's mansion. At the time of the attack, the rebels are closing in on the Capitol, while Katniss and Gale are sneaking in with Capitol refugees in an attempt to assassinate President Snow. The bombs, which appear to have the Capitol's seal, primarily target a group of Capitol children who have been isolated for safety. After they go off, medics rush in, including Katniss' sister, Prim. But then bombs go off again, killing Prim and knocking Katniss out while the rebels gain full control over the Capitol.

This is a pivotal scene, for it leaves Katniss with the suspicion that her side, President Coin's rebellion, is just as corrupt as those they are fighting against. The death of her sister leaves her seeking revenge on both Snow and Coin, rejecting the new leadership under Coin by assassinating her instead. She also takes some of her pain out on Gale, as the idea of a delayed double bombing to draw medics in was his invention. While Katniss seemingly makes up her mind that despite the planes' marking, this was a violent and unnecessary gesture from Coin's forces, there is still some ambiguity to the scene. Here are the hints from the book and film about who really ordered the attack, most of which points the finger of blame at Coin, Gale, and the rebels.

Coin Was Getting Power Hungry

By the time the children are bombed, it's clear that Coin has joined the dark side, if she wasn't there the whole time. Shortly after the attack, she takes indefinite control of Panem, proposes a new Hunger Games for retribution, and seems very happy keeping the Capitol just like it was before. By the time Katniss kills her, it's clear that Col is nearly as bad as Snow, and just as ready to sacrifice children, including Katniss. It thus seems very possible that she would be ruthless in her war strategy, and could have pulled this off.

The Bombs Targeted The Capitol

Why would Snow want to bomb the Capitol's own children? As Katniss speculates in the book, it could have been to draw in rebel medics and then attack them. However, as Snow stated in the book and movie, the rebels were already winning at this point, so sacrificing more Capitol lives would be a strange final strategy.

Gale & Beetee Did Come Up With The Idea

In the film, Katniss is disturbed by the idea that Gale tells her about to have a small bomb go off once and then later go off again to hurt the medics who rushed in to help. It would be a strange coincidence for the Capitol to have developed this same technology.

The Capitol Was Already Weak

Katniss and Snow discuss the fact that the rebellion had already succeeded by the time the bomb had dropped, making the attack unnecessary. In the book, Katniss wonders why the bombs arrived in a Capitol vehicle and why the Capitol didn't attack it, if the bombs were the rebels'. But if what Snow says is true, this can easily be explained by the fact that the Capitol was already too weak to maintain control over its vehicles and counter an attack.

While it's not incredibly clear in the movie why young Prim is on the front lines as a medic, and it's not fully addressed, this is an issue that Katniss grapples with in the book: "but for all that, someone very high up would have had to approve putting a 13-year-old in combat. Did Coin do it, hoping that losing Prim would push me completely over the edge? Or, at least, firmly on her side?" With Coin clearly invested in having Katniss on her side, this would have been the motivation to sacrifice Prim, assuming Katniss would be angry at the Capitol.

And for the evidence against...

Snow Seems Very Pleased By It

This is the one piece of evidence that suggests that Snow, and not Coin, was behind it all; Snow is the one who plants the seeds of doubt in Katniss' mind, and he is neither trustworthy nor on her side. Is it possible that he manipulated the facts in the hopes that the districts would plunge into chaos and give him a higher chance of survival, rather than inevitable death under Coin? Sure, but it seems more likely that Coin was behind it, and Snow just used this informtation to further torture Katniss.

Perhaps who really dropped the bombs does not matter; Katniss seems to understand by the end of the book that the lines of good and evil are blurry, and that absolute power always has a corrupting influence. Both sides were guilty, and hopefully the democracy that later comes to Panem is a vast improvement on the government she took down over the course of The Hunger Games series.