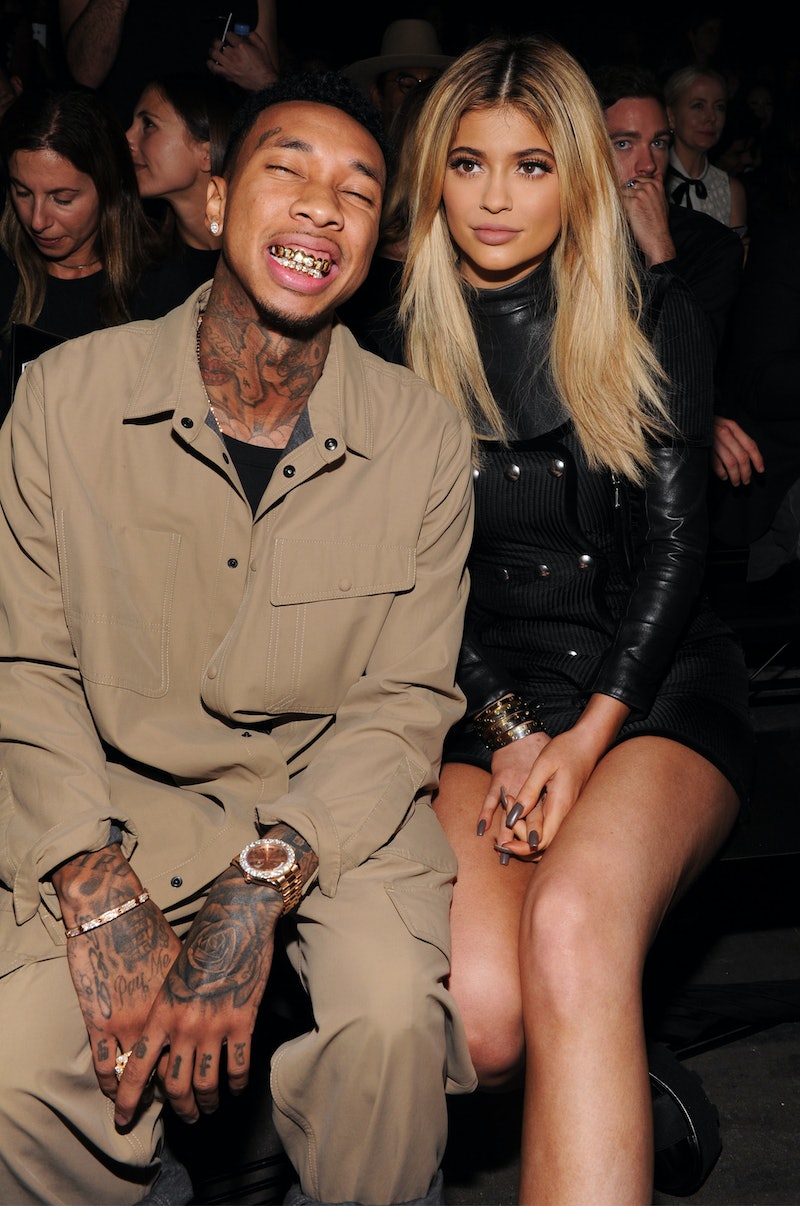 If Kylie Jenner and Tyga did indeed call it quits after three months of publicly dating, they seem to be headed towards calmer waters — at least if Snapchat is any indication. The youngest Jenner, who told Elle Canada earlier this month, "I don’t want people to know every time we fight or break up, so I'd rather keep some things private," has remained mostly mum about her relationship with the rapper, but in the case of social media, actions speak louder than words. On Saturday, Jenner followed up a pair of videos of her lipsyncing to Bryson Tiller's "Been That Way" (choice lyrics: "I wanna know how we became so distant girl," "Now I done caught feelings worth more than millions/ And I feel it, you hurting and I'm healing") with a snapchat, showing what looks to be Kylie & Tyga back together — I mean, they were holding hands.

In the snapchat, you can see Jenner sitting closely next to Tyga (or at least a stand-in who has the rapper's exact hand tats) with the caption "Everyone needs to chill." If the couple really is back together, it would be great for Tyga, because there's no convenient way to alter the word "Kylie" when it's tattooed on your arm. Still, there's no way to know yet if they truly are reunited, and the ways they've both spent the past couple days haven't made the guessing any easier. Here's a play-by-play of everything that seems to have gone down between them in the last 72 hours.

According to TMZ, Jenner does not attend Tyga's 26th birthday party at LA's Nice Guy. Not a single Kardashian or Jenner (even Khloe. Khloe!) wished Tyga a Happy 26th on social media, either.

Multiple sources "confirm" to People that KyTy have broken up after a year of dating (which is like seven in Kardashian years). Later, Jenner hangs with A$AP Rocky and Justin Bieber at the same venue where Tyga had his birthday the night before. Jenner is seen leaving with A$AP. Later, she shares The Snap Overanalyzed Around The World, of her lipsyncing to some possibly telling lyrics from "Been That Way," stoking the flames of the breakup rumor.

Jenner appears to take it all back, sharing The Second Snap Overanalyzed Around The World, of what appears to be she and Tyga in sweats with the caption "Everyone needs to chill."

Did Jenner just put a kabash on the breakup rumors, or is this a sign that Tyga is destined to take his place beside the French Montana's and, dare I say, Ray-J's, of the Kardash-o-sphere? Only time will tell, so for now, let's keep reading way too much into the teen's social media posts and decide for ourselves.