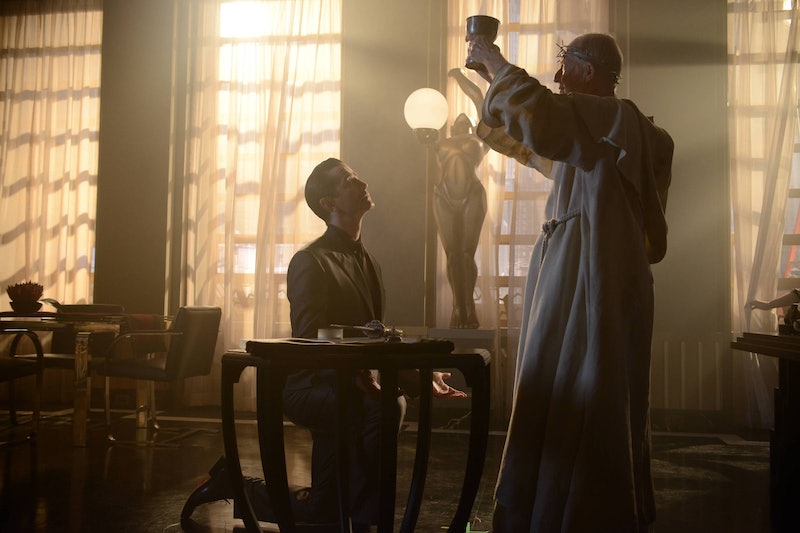 So far, the rest of Gotham Season 2's first half seems to be leading towards Theo Galavan either completing his plot to take over the city or being foiled by some combination of Jim Gordon, Bullock, Captain Barnes, the Penguin, and/or Edward Nygma. So what is the actual plan that the Galavan — excuse me, Dumas — family is trying to pull off? And what do they mean by a "Day of Reckoning?" The last time that phrase was used, it was in reference to "Beasts of Prey," the episode that introduced the Ogre and had Bruce and Selina confront Reggie. The only thing that's known for absolute sure so far about the Order of the St. Dumas is that they want to kill Bruce Wayne, and call him the "son of Gotham."

It could be as simple as that: the "reckoning" could be the ritualistic murder of Bruce Wayne, the last surviving member of the Wayne family. But that doesn't answer the question of why they formed so many other arcane religious practices, or why Galavan keeps referring to his takeover as a "cleansing" with "blood and fire." He's already planning to kill Bruce, and he's been setting fire to Wayne Enterprises' buildings, so that's some fire, and some blood. But could he also be planning to level the entire city, the way Bane called himself "Gotham's reckoning" in The Dark Knight Rises? The character has had lots of similarities to R'as al Ghul throughout the season, and he's another villain who would probably use the phrase "reckoning" to mean citywide destruction.

But there's also a larger question: what role do the monks play in this plan to "cleanse" Gotham on it's "reckoning?" So far, they've killed several men who were caught performing illegal deeds and at least one innocent bystander, the pier guard. The number "nine" has been mentioned a few times, and it seems as though nine people may have to die before they can kill Wayne. It's still unclear if there are any supernatural elements at play on Gotham, and if the monks have any sort of actual power beyond being trained killers.

And how did they form their connection? Clearly all of these people are not descended from the Dumas, but it is a little weird that this presumed defunct church was never heard of before now. Since their base seems to be in the sewer, it's possible that they've been recruiting petty criminals or otherwise undesirable people that no one would miss for a while now.

Their ritualistic bleeding was also a gross surprise. Since the whole church was founded on a blood feud based around two warring families, it made sense that metaphorical "blood" (referenced in Galavan's speech) would be important to the monks, but I didn't expect it to be so literal. The way they use and need blood makes the cult even creepier. It's also inured them to physical pain, but something about the way they cut themselves with knives has got to play into the ultimate conclusion of the Galavan saga.