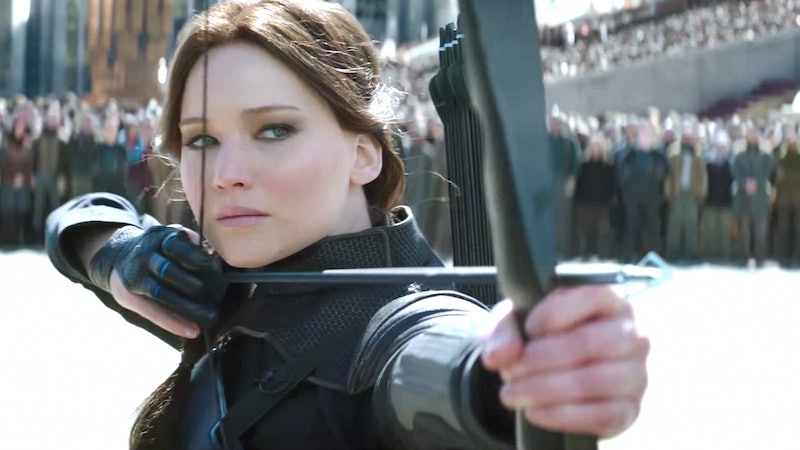 An assumption I've heard perpetuated throughout my whole life is that men and boys can't and won't relate to a female heroine and therefore won't read books or see movies involving one. Here's the thing, though — that's totally not true, and the fact that an equal number of men and women went to see Mockingjay, Part 2 during its opening weekend prove it. To put it simply, Katniss Everdeen is leaving behind an extremely gratifying legacy for far bigger reasons than just her archery prowess.

Katniss's true victory is not what she accomplished not in her fictional world, but in our real one. According to The Hollywood Reporter, the North American audience for Mockingjay over the course of its opening weekend ended up including an equal number of men and women. Reported THR,

Early exit polls showed that 63 percent of the movie's North American audience was female, while 52 percent was under the age of 25, according to Rentrak. Those between the ages of 18 and 24 make up the biggest chunk of ticket buyers at 37 percent. By the end of the weekend, Lionsgate said the the gender split had evened out to 50-50.

You read that correctly, ladies and gents. Both men and women were equally committed to seeing the conclusion of Katniss' story — the tale of a female, action-hero heroine. These statistics will convince any naysayers that despite preconceived notions about gender preference for film protagonists, when audiences are presented with a well-told story starring a badass female hero, they will embrace it — and her.

Furthermore, this 50-50 split proves that Katniss isn't just someone for girls and women to look up to and relate to. The fact that Katniss is female isn't off-putting to guys, no matter what some might've assumed; women and men can be invested in the hero's journey of a teenage girl. People of both genders felt the same immediacy to see Mockingjay in its opening weekend, and felt that this story was important enough to them to shell out their money. Most importantly, it proves that The Hunger Games saga — as well as so many other films — hasn't been demeaned or lessened by the fact that its main character is a female action star.

The Hunger Games saga has concluded, the story of Panem has been told once and for all, and the verdict is in: Katniss Everdeen is a beloved heroine by all, and the box office numbers prove it. In the case of appealing to audiences, the odds were most definitely in her favor. And because of her, they'll be in the favor of future film heroines, too.