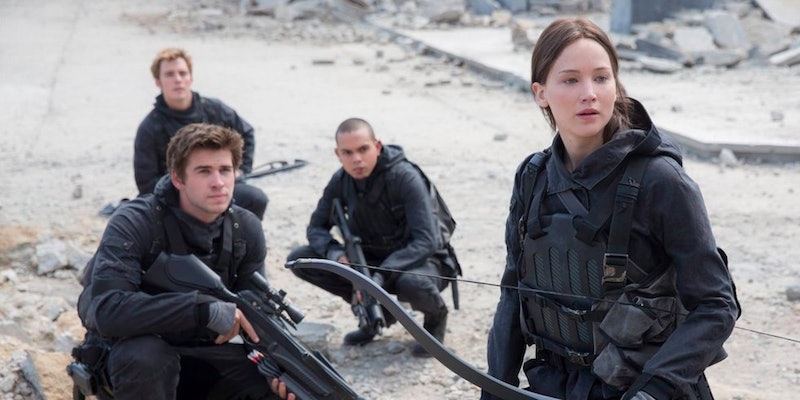 It's the end of an era. Mockingjay, Part 2 is here, leaving Hunger Games fans to mourn the end of their beloved franchise. They are also freaking out about this last installment, which accomplished a lot in the series, including resolving the Peeta/Katniss/Gale love triangle and providing a look at what a democratic and Hunger Games-less Panem might look like. I'm sure I wasn't the only one to get out of the movie and immediately start texting my reactions to all of my friends, both of the film itself and to the idea of the franchise ending.

Even those who aren't die-hard fans of The Hunger Games series have probably been aware of it enough to notice the fact that every year, November has meant more buzz and excitement about the latest installment, and hopefully have some sympathy for those of us who are sad to see it go, for a number of reasons. From those who are feeling nostalgic about watching the movies every year, to those in either the ardent Team Peeta or Team Gale camps, to the many people who just love Jennifer Lawrence so much, here are the texts every Hunger Games fan probably sent after seeing Mockingjay, Part 2.

"Remember When The First Movie Came Out?"

Watching this final movie will certainly leave lots of people, especially younger fans, reminiscing about how much has changed since they watched the first movie, or read the first book.

Lawrence was still relatively unknown when she was cast as Katniss, and she's now a household name, equal pay advocate, and definitely a real adult actress. Luckily, she shines especially bright in Mockingjay, Part 2, ending the series on a high note.

"It's Crazy How Relevant This Is"

There are some real parallels between current events and the Hunger Games movies, including themes of rebellion and protest, the question of when resistance becomes cruel in its own right, and the idea of compassion for refugees and children, no matter what side they've come from.

"I Jumped Out Of My Seat"

There are some truly scary moments in this movie, especially when the group goes into the tunnels, and the threat of mutts looms.

"Can Gale Stop Using Hunting Metaphors All The Time?"

OK, this might just be me, but all the Gale in this movie just made me wish he would stop pretending that being a hunter made him an expert on every single thing in life.

"SO MANY GREAT ACTORS"

I'm glad that thanks to my generation, Julianne Moore, Philip Seymour Hoffman, and Donald Sutherland had to say things like "Tracker Jackers," "propo," and "Peeta." But in all seriousness, these actors, including now Lawrence herself, really elevate the series.

"Wait, So Did Gale Kill Prim?"

This is confusing and left sort of intentionally ambiguous. Those who read the book will understand the complex reasons why Gale and President Coin are implicated in Prim's death. He kind of did and he kind of didn't, but either way, Team Peeta should be happy by the end of Mockingjay.

I, for one, was thrown by the final scene of the film, a flash-forward to domestic Katniss/Peeta bliss. Neither actor looks much older than they did in the rest of the fims, suggesting that they did not wait long to have two children — though the book explicitly states that this scene takes place 15 years after the events of Mockingjay. Maybe the movie versions of Peeta and Katniss just aged that gracefully.

There are definitely sad texts, both because of the many very sad deaths in the film and because the franchise is now over. Sometimes, the sobbing emoji says it best.

"What Will We Do Next November?"

For many friends, seeing the movies every November has become a tradition, especially over Thanksgiving break for students. Friends will be wondering what new tradition they will have to start, and what they'll argue about when they don't have Peeta vs. Gale to debate anymore.

"Are The Divergent Movies Any Good?"

Mockingjay came with a preview for the first installment of Allegiant. For those who haven't already discovered the movies, they might be tempted to get on board with another dystopian YA series.

Whether they leave you sobbing, groaning, or laughing, The Hunger Games movies have always been best enjoyed with friends. You'll get through the series' end, as long as you stick together.