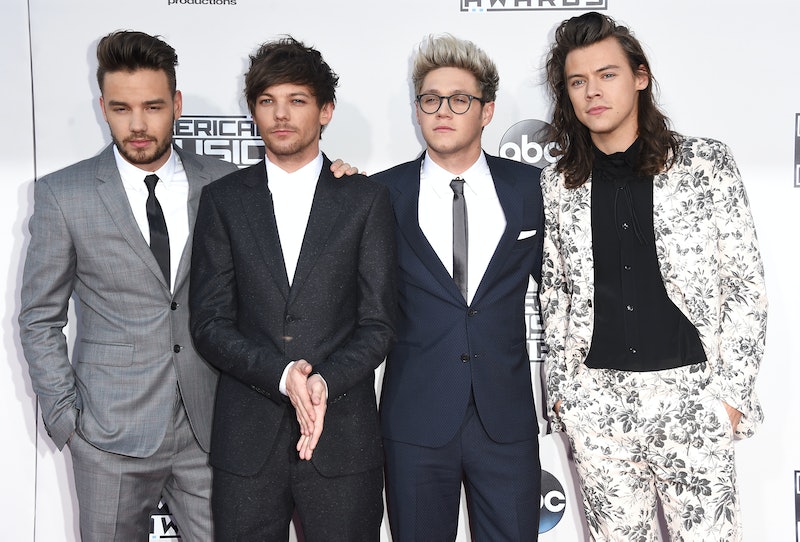 It's not live TV if there aren't a few awkward moments, right? Well, there were certainly a few on Sunday and One Direction's AMAs red carpet interview was definitely awkward. The four guys — Harry Style, Louis Tomlinson, Liam Payne and Niall Horan — met up with E! News' Giuliana Rancic to ask the million dollar question, "What are you wearing?" "I wish I knew," Tomlinson said with a smile. Only Harry Styles could answer that question — Gucci. While Niall Horan, wearing glasses and a smart suit said he looked more like a Wall Street banker. "I don't know how I feel about that," he said. Payne did admit it was nice to be so dressed up: "We've never done posh suits. Nice to be in a suit."

The guys spent most of the rest of their interview staring at their feet, though it did allow Horan to show off his pink socks. Payne and Tomlinson seemed less interested in Rancic's questions about whether they ever use Uber — verdict is unfortunately still out, since they never answered the question — and more interested in trying to knock one another off the platform. Neither ended up falling over though, which probably would have made the interview more interesting.

The boys did answer some questions with straight faces though. Styles did say that he and his bandmates are proud of their new album, saying, "We definitely feel it's the best one we've made in terms of music." He also admitted he's not great at golf, even though he plays, saying that he started when he was 10. Tomlinson than said he's only played once, but still beat Horan. This lead the guys to talk about ping pong, which they were all pretty excited about.

Since the guys have already announced they're taking an extended hiatus in March, Rancic asked what they may be doing. While we can guess it could be ping pong, Payne did say they're excited to take the time off and that they can't be too scared of what's outside. They need to live life. "That's the great sort of thing about having three other bros around you, keep your feet on the ground."

Hopefully the guys have more fun at the show, where they're performing their latest single "Perfect" off their new album, Made In The A.M.