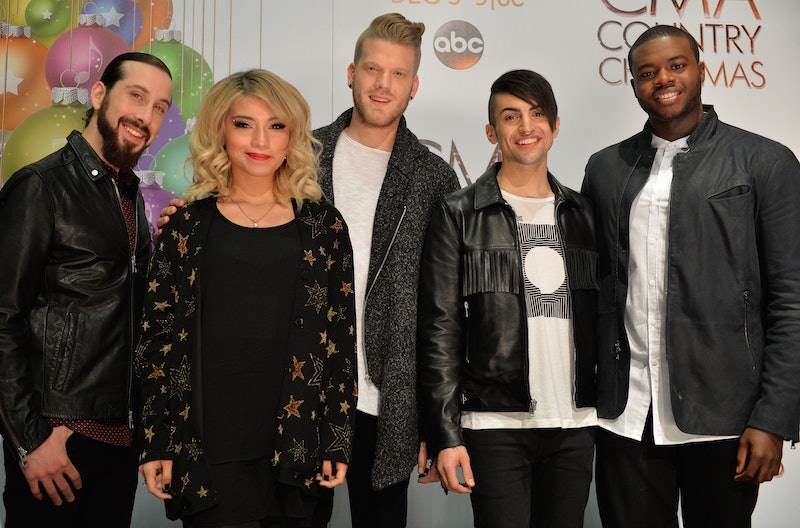 They killed it in Pitch Perfect 2, so will Pentatonix be in Pitch Perfect 3 ? At the American Music Awards on Sunday, the group talked about the film and whether they'll be apart of it. The good news is they're totally pumped that another sequel is on the way, but, they are first to admit they know as much as you do about it at this point. While it's already been reported that Anna Kendrick and Rebel Wilson will return for the upcoming sequel, Pentatonix are hoping they will be there too.

You may remember the a capella group as the rival Canadian group competing against the Barden Bellas at the world championships in Pitch Perfect 2. Or, you know, the group who totally slayed Beyoncé's whole career in just one medley. So, will they be in the upcoming film?

"We don't know," Avi Kaplan said, about the chance they'll get to return in the new film. "Cross our fingers."

"We would love that," Kirstin Maldonado said.

For right now the group is more focused on the upcoming Star Wars film The Force Awakens, the theme of which they're performing at the AMAs. "New [movie] is going to be incredible," Kevin Olusola said. Don't worry, they haven't seen it yet or anything, so there were no spoilers. They just know the force is strong with that movie, just as we know their performance of the Star Wars theme during the show will be strong. And, fingers crossed they make it back to Pitch Perfect, too!