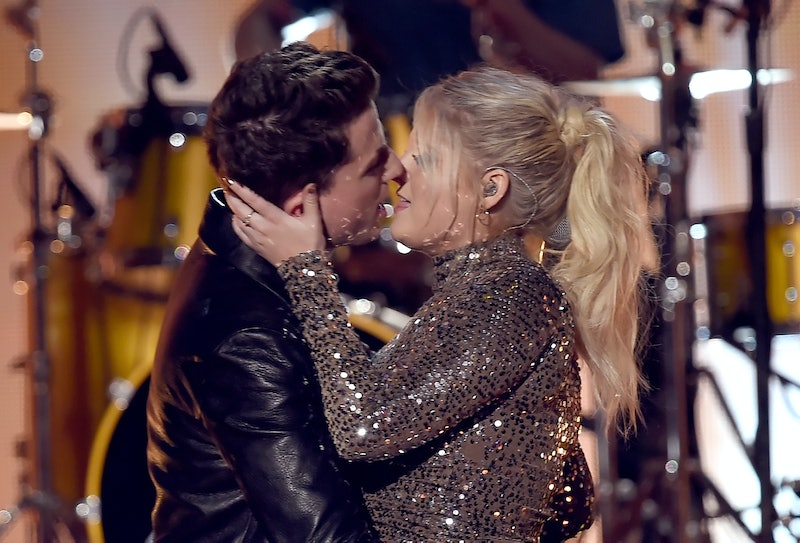 Both marvelous and successful singers in their own individual right, Charlie Puth and Meghan Trainor may be singing sweet music together. Puth and Trainor performed their hit “Marvin Gaye” at the American Music Awards, and it all started out normally: Singing, swaying, harmonizing, and then — boom — they kissed! It seemed like quite a smooch, so the question must be asked: Are Meghan Trainor and Charlie Puth dating in real life?

Well, sorry, fans, but it sure doesn’t seem like it. Trainor was rumored to be dating Cory Andersen, who manages Nick Jonas, earlier this year, but Trainor’s team quickly nipped that in the bud. She’s remained officially single since she came on the scene with her hit “All About That Bass.” In an April 2015 interview with MTV, the 21-year-old Trainor talked about how awkward it was to kiss Puth for their video. “There were like, 40 people there and his parents were in the green room, and so we had to make out a bunch of times,” she said, and she said outright that she and Puth were not dating. She even said on the AMAs red carpet that she was single. Way to take the wind right out of our sails, huh, Meghan?

As for Puth, he’s admitted to MTV that he has a crush on Kendall Jenner and he’s also been seen hanging out with Selena Gomez, but they are just friends, too. Everyone is friends, no one is dating, and I have no relationships to ‘ship, you guys. What’s wrong with the world?

So, though Puth and Trainor really steamed up their video and the stage with their performance of “Marvin Gaye,” I think the case can be closed and we can all settle down with the fact that they are just acting and not actually Marvin Gaye-ing and getting it on. Oh well.