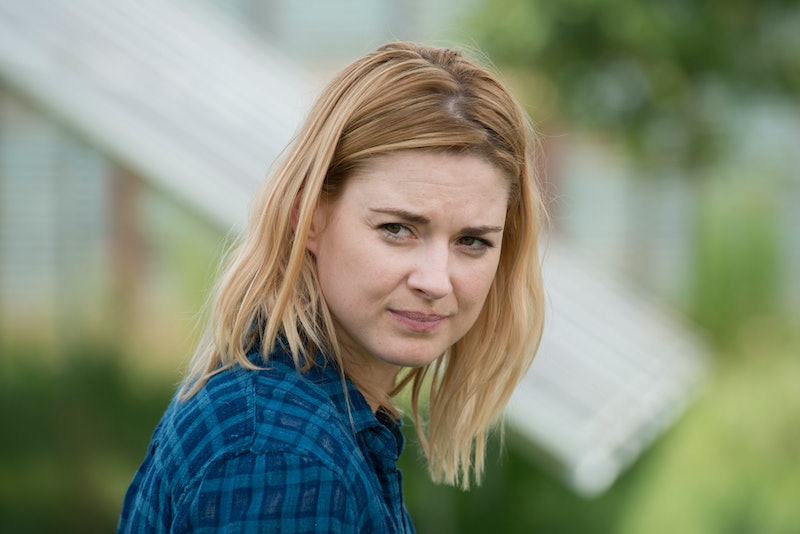 The foreshadowing was there, but I was so happy to see Glenn again that I missed the structural weakness that caused a whole new problem on The Walking Dead. The new survivors that Rick Grimes and his merry men — and women — have encountered will finally be put to the test. At the end of Sunday's episode, Alexandria's wall fell on The Walking Dead, letting in a herd of walkers. It was the creaky old wood in the watch tower that finally caved in and gave way to what is sure to be a game-changing battle.

It's a good thing they spent a good part of their day doing slayer training with Rosita, am I right? The survivors in Alexandria have lead a charmed post-apocalyptic life, with houses and electricity and, like, running water. Not many of them have truly faced the outside world. Even the Wolf attack was just humans. Now, they can't escape the nightmare any more. Next week's mid-season finale, entitled "Start To Finish," should separate the heroes from the red shirts in Alexandria. I don't think the tower falling was anyone's fault. Spencer's grappling hook may not have helped, but he is not directly responsible. As I alluded to above, we saw some of the wood creaking at the top of the episode, so I think it just cracked under pressure. That's a metaphor for the Safe-Zone if I ever heard one.

I suppose this was inevitable. Walls can only keep problems out for so long, and it doesn't seem likely that a group of walkers so large would lose interest in a whole neighborhood full of tasty guts. This does ultimately make it easier for Daryl, Abe, Sasha, Glenn, and Enid to rejoin their group. However, there are plenty of conflicts within the walls of Alexandria that will only be exacerbated by a walker attack. Will Morgan's evil Wolf prisoner escape? What is Carol going to do now that she knows? Why is Ron following Carl with a gun? Does Denise have a cheat sheet for this? Is Deanna planning on dying? Why is her son Spencer such a dumb vigilante? It would be nice if everyone set aside their differences and banded together to fight the herd on The Walking Dead, but somehow I don't think that's going to happen.