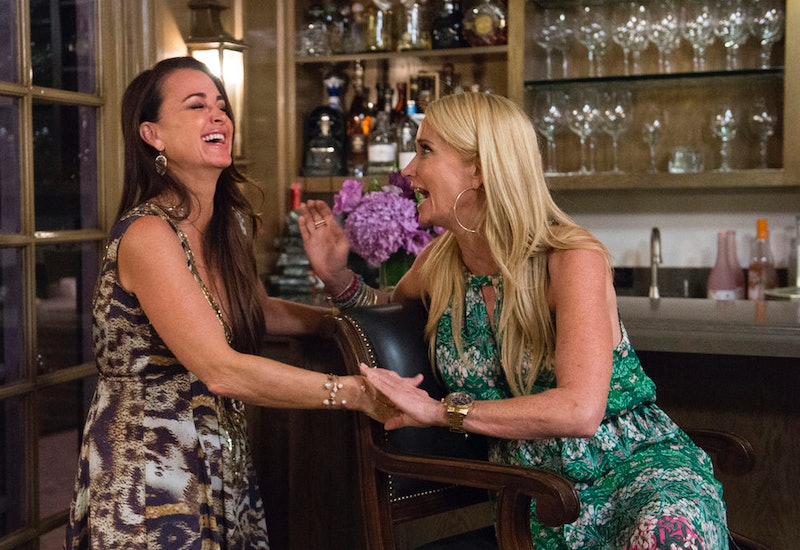 Over the seasons of Real Housewives of Beverly Hills, drama between the Richards sisters has been running rampant. As if the franchise needed even more confrontation, Kim and Kyle Richards have brought familial drama to RHOBH since Day One. On one hand, this dynamic is entertaining. On the other hand, it's an entirely different relationship level that when it's bad, you're essentially watching a family fall apart. One of the things that has drawn the women apart is Kim Richards personal struggles with addiction, which have been made public throughout the seasons of Real Housewives of Beverly Hills. On the RHOBH special, which highlighted Season 1 of the franchise, Kyle Richards opened up more about her sister's alcoholism, revealing just how bad things got during the first season — specifically, limogate.

In one of the most iconic, and heartbreaking, scenes in Housewives history, Kim accused her sister of stealing her house, while Kyle accused her sister of being "sick and an alcoholic." For both women, it was a low spot to relive during the reunion, but they seemingly were able to put their differences aside and work through things. Knowing that things haven't necessarily been smooth for the women since is sad, but as a fan of the show, we didn't even know how bad things were between the sisters until Kyle, and the other women, opened up about it on the special.

According to Kyle, Kim's drinking has been kept a secret by the family for a while. Kim had been sober for some time, but throughout the season, Kyle started becoming suspicious that Kim was drinking again. In certain moments, like the dinner in New York City when Kyle and Camille Grammer go head-to-head, you can tell that Kyle is cautious of her sister's sobriety, purely by the way she interacts with her. Taylor Armstrong also talked about Kim's drinking on the special, claiming that there were small hotel liquor bottles empty in Kim's room.

During the special, producers said they were aware that Kim was hiding her drinking. At the final party of the season, producers claimed that Kim was in a limo by herself, late to Taylor's birthday party, because her manager was trying to sober her up. In another "unseen moment," Kyle tells Kim that she was no longer going to "help" Kim because she didn't stay "OK."

Kim has been honest about her struggle with alcohol telling Dr. Phil, "I am an alcoholic," and speaking about her relapse in the April 2015 interview. "I did have drinks a couple other times over the past few months. It was wine. I was ashamed to say anything at the reunion, embarrassed," she admitted. "I was angry and frightened and I was scared. I knew what I had done ... None of this would have happened if I didn’t drink."

Kyle was the main voice of the conversation during the special. And, while I know that it's not easy to confront a conversation like your sister's sobriety for the hundredth time, as a fan I can say that I find Kyle's honesty admirable. It also reconfirms how Kim's health is the most important thing in all of this. It's much bigger than any TV show, for sure. In July she spoke about her rehab stint and how much she loves sobriety:

I went in and I got to learn a whole lot about myself. I dug deep into my past, things that happened to me as a child, good and bad, teenage years, relationships with all my loved ones, where they need to be mended, where they're very powerful. I worked on me.

Hopefully, her health will continue to be the more important thing as the show continues into its sixth season.