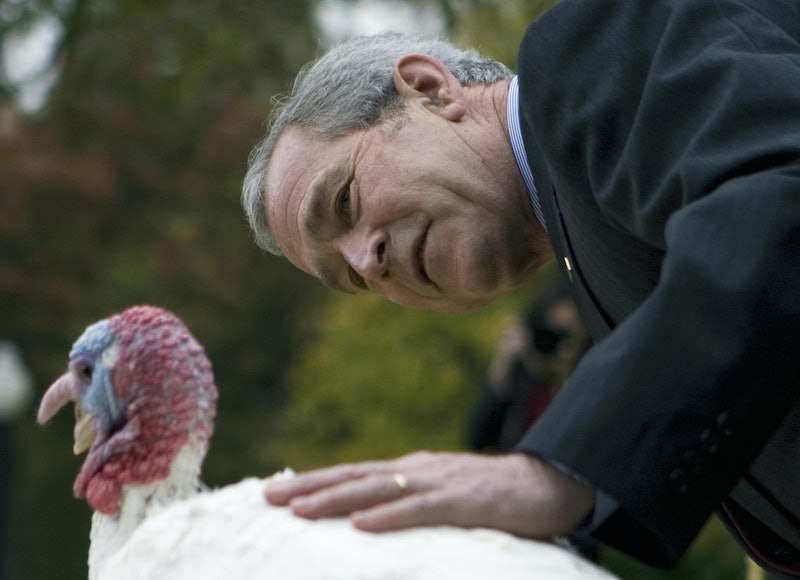 Given the intense dose of stress that accompanies being responsible for an entire nation’s well-being, it’s safe to say that the president of the United States needs a pet to lower those cortisol levels. All animal lovers know there’s nothing like a plush and cuddly little critter to calm tense nerves and relieve stress — that thing which turns presidents’ hair white exceedingly quickly. Harry Truman explained the necessity of having a pet that loves you unconditionally: "If you want a friend in Washington? Get a dog."

A president always has a constituent in his pet, but the White House’s history suggests that domestic cats and dogs don’t always cut it. Sometimes, the White House just has to double as a zoo — woodland and exotic creatures included.

Most of the time, presidents handpicked their pets with great thought. Other times, destiny hurled them their way. Take, for example, the time a little girl threw a badger toward Theodore Roosevelt at a Kansas train station in 1903 during a campaign tour. No one knows what strange force possessed her to do so, but what greater sign of admiration could she have shown? She yelled to the president that the badger’s name was Josiah.

Teddy Roosevelt and his family nursed the little badger with a bottle and allowed him to run wild in the house. Roosevelt said that the animal’s "temper was short but [his] nature was fundamentally friendly.” That short temper eventually got the best of him, though, as Roosevelt decided to send him to the Bronx Zoo a year or two later, after his incessant ankle-biting became too much to handle.

The Roosevelts also owned a hyena and a black bear, which was named after the 18th-century Calvinist Jonathan Edwards.

President Calvin Coolidge, who assumed office in 1923, picked up where Roosevelt had left off. Aside from the more conventional cats, dogs, and birds, Coolidge housed a bobcat, a donkey named Ebenezer, two raccoons, lion cubs, a wallaby, and, last but not least, a hippo named Billy. You're five times more likely to be killed by a hippo than by a shark, so the reasoning behind this choice is unclear. The baby hippo was captured in Liberia by Harvey Firestone, the founder of Firestone Tires, who subsequently gifted it to Coolidge, making for a rather sad tale of unwarranted domestication.

Hippos should probably be left to do their thing in the wild, but I can get on board with pet raccoons. Rebecca the raccoon was sent to the White House to be eaten, but the family couldn't bring itself to harm the playful thing. The president walked around with Rebecca wrapped around his shoulders when she wasn't in the arms of First Lady Grace Coolidge.

Sixth President John Quincy Adams owned an alligator, which he reportedly kept in a bathroom in the East Room and occasionally used to scare guests. Herbert Hoover would later continue that interesting, albeit inhumane, trend.

John Quincy Adams' wife, Louisa, kept silkworms so that she could both harvest her own silk and give herself a break from political life. Everyone needs a creative outlet.

This one actually makes sense, especially if you're a president who likes dairy. Pauline the cow produced milk for Taft, and was the last cow to graze the White House's green pastures.

There is a special place in my heart for goats, and anyone who has visited a petting zoo will agree. Harrison bought a goat named Old Whiskers for his grandchildren to play with. Old Whiskers was a troublemaker. One day, after towing around Harrison's grandchildren in a makeshift carriage, he escaped through the gates. A chase ensued, with the president himself participating, and the goat was returned back to its home.

Money was tight during World War I, so Woodrow Wilson pinched some pennies by tending to the yard the old-fashioned way — with livestock. He bought a flock of sheep, and among them was a ram named Old Ike. He was apparently a grizzly old fellow who chewed tobacco.

The 23rd president clearly had high expectation for his opossums, who were named Mr. Protection and Mr. Reciprocity.

Jefferson bought the mockingbird, Dick, from a slave before moving into the White House. He wrote a letter to a friend, warning the children to never mess with the bird:

I sincerely congratulate you on the arrival of the mockingbird. Teach all the children to venerate it as a superior being which will haunt them if any harm is done to itself or its eggs.

The 15th president was given a herd of elephants by the King of Siam. He gave away all but one of them, which he kept at the White House along with a pair of bald eagles. The King may have also offered elephants to Abraham Lincoln to aid the Union armies, but the letters between the two leaders have been distorted.

Back in the late 1800s, Siamese cats were considered exotic, but Hayes helped change that. He is recorded as the first American to bring the feline breed over to the States.