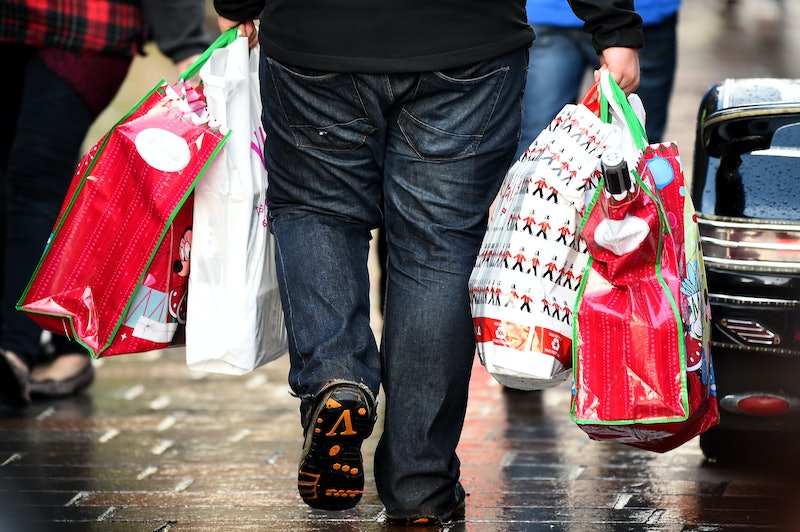 The name for the day definitely seems fitting, but have you ever wondered why is it called Black Friday? Thanksgiving is the oldest holiday in America, and it's a time for all of us to slow down, take a deep breath, and focus on all of the wonderful things in our lives that we're grateful for. But, since this is America, naturally we need to follow that up with mobs and masses of pushy shoppers on Black Friday — the most insane shopping day of the year. Depending on who you ask, it can certainly seem like a dark time, indeed.

Interestingly enough, there's not one definite answer as to where the wild commercial holiday got its name. But, there are a few different theories. Some say that when the day began, it actually had nothing to do with shopping. Instead, beginning in 1951, many employers coined the term because so many of their employees would call in sick on the day after Thanksgiving. Obviously, the severe lack of workers made for a pretty challenging day at the office.

What's another theory? Many people say that Philadelphia police and bus drivers used the term "Black Friday" to describe all of the wild traffic around downtown stores starting in 1961. Apparently the phrase remained a Philadelphia quirk for quite some time, until it became more widespread in the mid-'90s. That theory definitely still makes sense — just ask anybody who's tried to drive through a parking lot on Black Friday.

The final theory has the most to do with shopping. The media first used the phrase in 1981, as they explained that Black Friday is the day that retailers finally earn a profit. Positive amounts are typically printed in black ink. So, when stores went "into the black," it meant they were making money.

Now that you know the history, maybe you want a few more interesting Black Friday tidbits to impress your relatives around the Thanksgiving table. Well, for starters, it's known as the craziest shopping day of the year, but it didn't actually earn that designation until 2001. Up until that point, the day before Christmas was the biggest shopping day of the year, because there's nothing that America loves more than procrastination.

But, it's now known as the busiest shopping day for good reason. Approximately 249 million shoppers will purchase something on the day, with the average shopper spending around $380.95. All of that contributes to around $50.9 billion total spent on the day.

Even crazier? There are nearly 20 other countries that celebrate Black Friday — even though they obviously don't celebrate the U.S. Thanksgiving holiday. So, the shopping day's popularity isn't just limited to the United States.

No matter how much longer the tradition of Black Friday sticks around, I think one thing is safe to say — the crazy commercialism of the holiday season is here to stay.