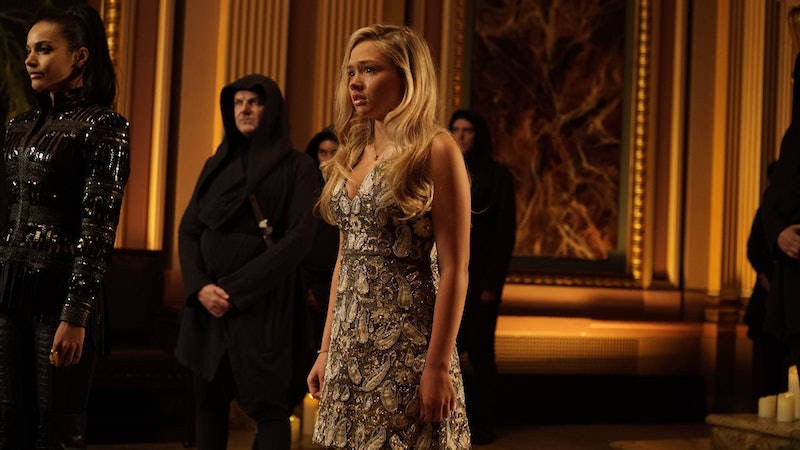 Poor Bruce Wayne has lived a rough life so far. He's an awkward rich kid with a troubled past recovering (or not) from the trauma of losing his parents. So it seems like a huge streak of luck that he'd meet Silver St. Cloud on Gotham , another rich kid, who befriends him (and seems maybe a little bit more into him). Sure, she happens to be the niece/ward of the villainous Theo Galavan, but nobody's perfect, right? It might seem like Silver is an invented character for Gotham just to make young Bruce Wayne's teenage years go a little smoother, but she actually has her origins in comic books too. So, how does Gotham's Silver St. Cloud compare to DC Comics' version?

St. Cloud was introduced in the comics way back in 1977 as a love interest for an adult Bruce Wayne. The biggest difference there is that they didn't meet as teenagers. Then again, in the comics, it's not like Bruce Wayne had run-ins with Catwoman, the Penguin, the Riddler, the Joker, et. al. as a teenager, either — that kind of revisionism is Gotham's M.O. But apart from the circumstances of their meeting, Gotham has kept a lot of her comic persona in tact, while bending other parts of it to fit this season's story. Here's how the two Silvers stack up against each other.

St. Cloud in the comics is a rich socialite, and later a party planner. And that's almost exactly how David Mazouz describes her Gotham counterpart at a press event, according to IGN. "When Silver comes along, she’s also a socialite. Also a trillionaire," he said. "It’s definitely more comfortable."

She's "just sort of the girl next door ... And by girl next door, I mean mansion. Mansion-slash-penthouse next door," Natalie Alyn Lind, who plays St. Cloud, added. In both the comics and the TV show, their wealth is one way they can relate to each other.

They're Both Love Interests

I mean, if you're a ultra-wealthy socialite who also lost your parents, how could you not get along? That seems like a match perfectly made for Wayne.

One Rubs Catwoman The Wrong Way

In the comics, St. Cloud's relationship to Wayne doesn't exactly cause strife for Catwoman. But on Gotham, St. Cloud definitely becomes a sore spot for Selina Kyle. "Cat starts getting kind of jealous because Silver’s not only a new girl but she’s very similar to Bruce," Lind told Just Jared. "And so you might start to see a more sensitive side to Selina, because she gets upset over him finding someone who’s so opposite from who she is.”

One Finds Out Batman's Secret Identity

The biggest, stand-out feature about St. Cloud in the comics is that she's one of the few characters who connects the dots and realizes that Bruce Wayne is Batman. On Gotham, there is no Batman yet, so the comics' version of the character has a leg-up here.

One Is A Villain

Watch out, Bruce. Gotham's St. Cloud "is described as having a heart beating with dark intent," according to Entertainment Weekly, and we've already seen some of that come out on the show. However, the comics' Silver doesn't become an antagonist. It shows that, even as a teenager, poor Bruce Wayne can't ever catch a break.

It's unclear whether or not Gotham's St. Cloud will achieve her nefarious goals, but her comics counterpart certainly didn't. That St. Cloud died after having her throat slit by the villain Onomatopoeia. Yikes! Maybe playing the villain will lead to a better outcome for the TV version of Silver St. Cloud.