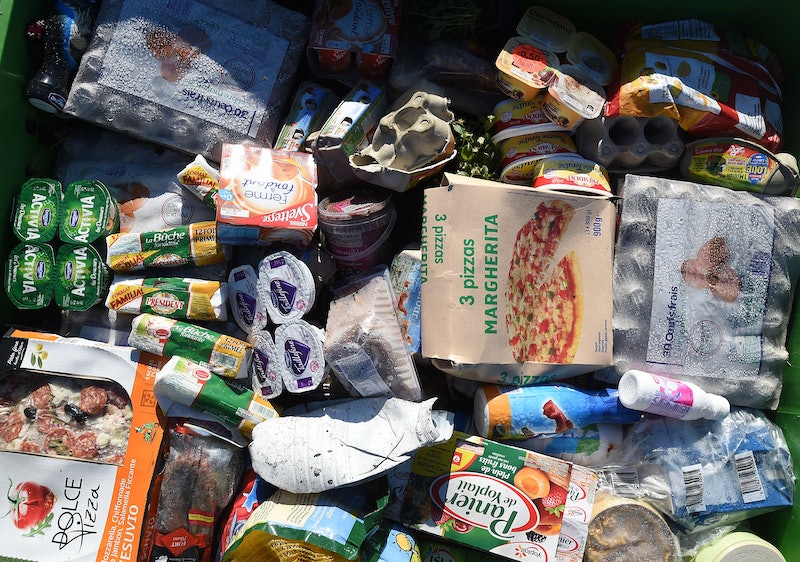 Most Americans will acknowledge that recycling is good for our environment — and in certain progressive cities, things can even get confrontational if people notice their neighbor isn't recycling. Recently, however, journalist and science columnist John Tierney wrote a piece for the New York Times called "The Reign of Recycling," challenging many of our long-held recycling beliefs. He provides recent research and statistics from institutions such as the Environmental Protection Agency which suggest that reprocessing everything we use (like plastic, glass, cardboard, and rubber) might not be as good for the planet as we think it is.

Furthermore, Tierney points out that our economy isn't exactly thriving from all it's recycling efforts — because its become more expensive than ever to process all of our leftover junk. David P. Steiner, the CEO of Waste Management (a major comprehensive waste and environmental services company) told Tierney that "there's a crisis to confront" if we unquestioningly believe that recycling is great for the planet.

Incidentally, the yearly rates of recycling in the United States have been declining. Half of the American population recycles daily, while 13 percent of Americans don't recycle at all. Wealthier, more educated demographics of the country are likeliest to recycle, but there are still a lot of people out there who either don't understand the purpose of recycling or are confused about how to do it. Additionally, it's simply not as easy, (or as encouraged) to recycle in certain parts of the country.

Regardless of where you stand on recycling, Tierney's latest article has given all of us a few important things to think about — and the information has already ruffled some feathers. Here are six facts about recycling you should know.

1. Recycling Costs A Lot More Money Than You Might Think

It costs $300 more to process one ton of recycling in New York City than it would cost to take those same materials to a landfill. Tierney points out that all of this extra cost could be put towards something more productive, like reducing greenhouse gas emissions. He also addresses that recycling comes with high transport costs, too, since it puts more trucks on the road and often transfers material overseas.

Tierney also notes that while the value of recyclables keeps declining, and the demand for recycled goods overseas is lowering, the cost of producing these materials continues to rise. A recent study found that recycling more than 10 percent of our trash actually hurts our economy (and environment, for that matter) much more than it helps.

Waste Management reports that there are more than 2,000 municipalities around the U.S. that are forced to spend money to get rid of their recyclables. Bill Moore, an Atlanta-based consultant on paper recycling, told the Guardian that everyone has been duped to believe recycling is free, when, in fact, "it's getting more expensive."

Large, American corporations have had to cut back on how much they recycle because it's becoming too expensive. For example, Walmart promised to use three billion pounds of recycled plastic in its packaging by the time 2020 rolled around, but it's simply turning out to be too costly — and they can't find enough materials to make it happen, anyway.

Tierney puts it this way: to cancel out the greenhouse effects of a New York to London flight, you would have to recycle 40,000 plastic bottles. And that's just if you fly coach. You'd need 100,000 bottles to make up for a business class seat.

This doesn't even account for the water you're wasting to clean out your recyclables, either. You could actually be increasing your carbon footprint if you're using heated water to wash out leftover residue. Sounds pretty counterintuitive, right?

Other research shows that the time, labor, and machinery needed to prepare plastic and glass for recycling could double the value of resources required for putting them into a landfill. In fact, recycling plastic and glass might have zero positive environmental benefits in the long term because of how much energy it uses. Tierney notes that nobody wants glass these days, so it's hardly worth reprocessing, and it's a struggle to get rid of.

3. ... But Recycling Aluminum, Paper, And Cardboard Is Worthwhile

According to Tierney, 90 percent of recycling's greenhouse benefits come from the following: aluminum, paper, and cardboard. Reusing these items rather than focusing on materials such as plastic, glass, and rubber comes with substantial advantages. By recycling a ton of soda cans, for instance, we can save three tons of carbon dioxide. Conversely, it takes three tons of glass to save only one ton of carbon dioxide.

Recycling cardboard and paper doesn't quickly drain monetary resources, either. Plus, manufacturing cardboard and paper from raw sources is incredibly expensive, so there's no question that reusing these products is cost-effective all around. Creating plastic and glass from raw materials doesn't put much strain on the environment or the economy, so they may not be worth recycling at all.

This doesn't mean we shouldn't be mindful of how much glass and plastic we use. On the contrary, these statistics should encourage us to use less plastic and glass so we don't strain our environment and economy by processing them. Take your stainless steel water bottle with you when you go out instead of buying bottled water, and bring your reusable bags with you to the grocery store, for starters.

4. Landfills Aren't As Harmful To The Environment As We Once Thought

While modern landfills and incineration plants decrease neighboring property values, the environmental impacts of them aren't as scary as you might think. The majority of landfills in the U.S. are being closely monitored, and they're expected to follow strict standards. Even the methane that is released from these facilities is now being harnessed to create electricity.

Tierney claims that incinerators are now releasing so few pollutants that "eco-conscious countries," like Japan, are accepting them as clean energy sources. Also, disposing of garbage in a landfill is cheaper than economists ever imagined. The external cost for every ton of trash at a waste disposal plant is around $9, compared to the once predicted $67-$280 per ton.

Originally, the U.S. feared there wasn't enough space in our country to hold all the landfills we need — but that isn't much of a concern anymore. There's still quite a bit of open space in the U.S., and the next thousand years of American garbage would only take up 0.1 percent of our available grazing land. Moreover, many landfills can be converted into parks or stadiums — like the courts at the United States Open tennis tournament.

In 2014, an economist at Bucknell University, Thomas C. Kinnaman, published a study in the Journal of Environmental Economics and Management citing that it would be more effective to impose a carbon tax on garbage than to continue the current system of recycling. He compared the costs of landfilling and recycling and studied the environmental damage of each option. According to Kinnaman, taxing $15 on each ton of trash that goes to the landfill and subsidizing the recycling of some aluminum and metals, would be a more efficient system of waste management.

Although Tierney doesn't advocate for it outright, he does shed light on the possible benefits of such a tax. However, there are those who find the concept problematic. A social psychiatrist at Princeton University, Sander Van Der Linden, says the option to essentially pay for our trash will reduce our sense of environmental responsibility because it will allow us to buy our way out of environmental consciousness.

6. The Psychology Of Recycling Can Be Misleading

Most of us simply feel better about ourselves when we separate our plastics from our half-eaten cheeseburger. We feel like we're doing our civic duty by recycling — even if we're not entirely sure what the exact benefits of our actions are.

That can be dangerous, since it can lead us to feel that even though we're consuming lots of plastic, paper, (and meat) we're still helping the environment. In reality we'd all do better to consume less in the first place.

This doesn't mean we should give up on recycling altogether — but it does mean we need to educate ourselves on the topic, waste less, and maybe tweak a few of our recycling habits to match reality.

More like this
What Is Barack Obama’s Net Worth? He Makes *Way* More Now As An Ex-President
By Hugh McIntyre
Your Home Could Seem So Much More Expensive If You Tried Any Of These Cheap Tricks
By Dena Ogden and Sara Brown-Rigoli
How To Support Gun Control Reform Right Now
By Morgan Brinlee and Carolyn Steber
How To Decorate Your Home Like A Coastal Grandmother
By Emma Garza
Get Even More From Bustle — Sign Up For The Newsletter