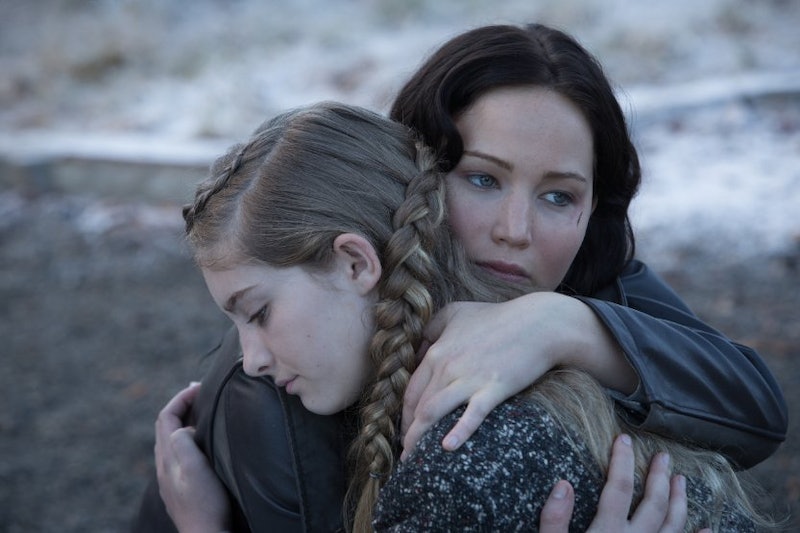 The Hunger Games trilogy has a tendency to sacrifice even its weakest and most vulnerable. Think of the elderly victors called back to the arena for the Quarter Quell, or the youngest of each of the Districts whose names are put forth for the Games each year. Katniss's own sister Prim is one of the children meant to take a place in the arena, though Katniss replaces her in the reaping. Katniss seems to keep Prim out of harm's way, but when the districts of Panem become embroiled in a civil war, there's not much that she can do to protect her sister, now a skilled medic, while still acting as the face of the revolution. So does Prim die in Mockingjay ?

It should go without saying that there are quite a few spoilers ahead. "I think she hears me," Katniss narrates in the book. She sees Prim at the Capitol gates, aiding children who have been trapped and injured by the sudden violence. "Because for just a moment, she catches sight of me, her lips form my name. And that's when the rest of the parachutes go off." She and Prim are both caught in a secondary blast meant to exponentially increase the casualties caused by a first round of bombings. It's a tactic devised by Gale — bombs are delivered on tiny parachutes much like those used to bring supplies from sponsors to tributes in the Hunger Games arena, detonating in one wave and then a second to strike where the damage has already occurred. And while Katniss was far enough from the bombs, and close enough to medical care, that she makes it through the violence, her sister Prim was not.

As in the book, the film Mockingjay, Part 2 does not actually show Prim's horrific death. The bombs explode and the scene cuts away, leaving us to wonder what's happened. But there's little ambiguity: Prim is really gone. Katniss is quick to point the finger at Gale, who did propose the strategy that took Prim's life along with many other children of the Capitol. But Gale neither knew the bombs would be used against District 13's own people, nor did he implement the attack. There were a number of individuals involved at each step of the way who catalyzed the attack, and no one person can truly be blamed for Prim's death.

President Coin made the final call that the parachute bombs be used in the offensive on the Capitol. Not only that, but it was her call to use the parachutes against her own people. As President Snow alludes in his conversation with Katniss following Prim's death, Coin saw that Katniss's loyalty to Coin's claim to presidency was wavering. She ensured that Prim was among those who would be killed in the blast, but she crafted the attack such that it looked like it had come from the Capitol rather than the rebels. If Katniss thought Snow had been responsible for Prim's death, it would renew her loyalty to the rebel cause, Coin reasoned.

Gale had already hypothesized that bombing in two waves would cause the maximum amount of damage when the rebels began the attack on the Capitol. Snow points this out to Katniss, and Katniss immediately blames Gale for her sister's death. In her mind, he'll never be separable from the damage his invention wrought, though he had no role in its actual execution. He's as astonished as any of us that Coin would use the bombs against her own people.

Like Gale, Beetee — the middle-aged, offbeat District 3 victor — bears little responsibility for the attack. Yet also like Gale, Beetee helped devised the plan. It came out of a conversation between the two about thinking like your prey, attacking them where they're most vulnerable. And in the attack, this meant that the bombs were disguised as aid-giving parachutes that more often bear gifts of medicine than they do a deadly weapon.

With blood constantly pouring from his mouth and those cold blue eyes, President Snow cuts an imposing figure in any case, and even more so when he confesses to Katniss that he has no trepidation about killing children when the moment calls for it. And even though he was not really responsible for the attack, which also killed and maimed many Capitol children, it was intended to look as though he ordered it — and it's never clear, scheming and cagey as he is, to what extent he was responsible for the violence that broke out on the day Prim died.

Fans of the series have known this death was coming since the films began shooting. Actress Willow Shields, who plays Prim, readied herself for the final scene — but little can prepare the actors or audiences for the death of a brave young woman as a casualty of in-fighting during the rebellion. "I just wanted to embody that strength for Prim as much as possible," Shields told MTV. Prim's death is a tragic addition to an already gutting story, but blame would be misplaced on any one person. It was the result of the rebellion's momentum towards its bloody conclusion that took Prim, and nearly Katniss, along with it.