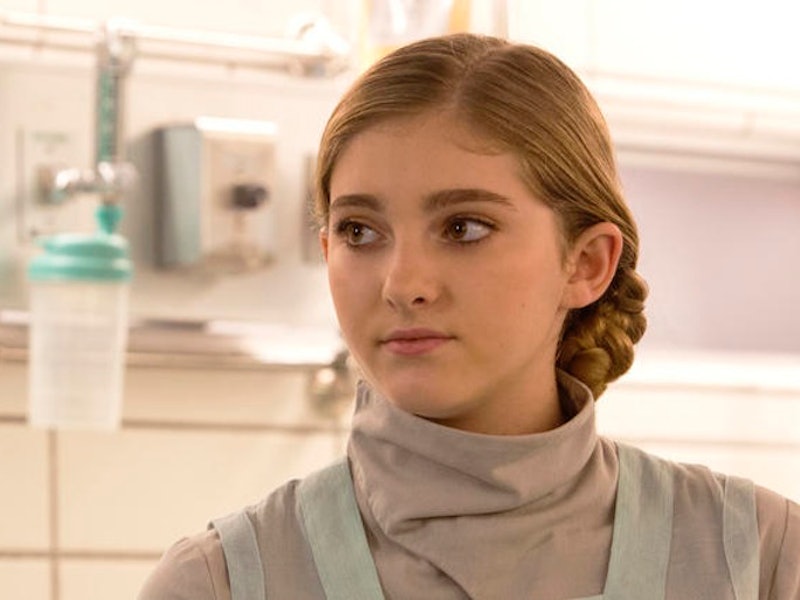 One of the most heartbreaking moments in the entire Hunger Games series has to be when Prim dies on the streets of the Capitol. After all, she was not even 14 years old and had so much potential. Plus, she was the apple of Katniss' eye and one of the main reasons she had the strength to continue fighting the good fight even when it seemed like the battle was all but lost and nothing felt worth it. Katniss was so destroyed by Prim's death that she lost her voice for several days after, and the haunting memory of seeing her little sister's final moments before she was killed by an explosion likely stayed with her forever. But what was Prim even doing in the Capitol in the first place? If it's been a long time since you've read Suzanne Collins' novels and you're hitting up Mockingjay Part 2 this weekend, you might need a refresher. Before you read any further, I should warn you that there are serious spoilers for the end of Mockingjay ahead!

In the beginning of Mockingjay the book, Prim really showed her maturity and impressed Katniss by how much she'd grown up in such a short amount of time. While living in the safety of Compartment E for much of the book, Prim put into practice her informal nurse training as she helped to heal the injured in the war. Later, after Katniss headed to the Capitol in order to end the war once and for all, it's revealed that Prim has also been allowed to go as a medic despite her young age on President Coin's orders. After all, it was Coin and the rebels of District 13 that had been bombing Capitol children in hopes of convincing Panem that President Snow was the one responsible for the horrific acts. After one particularly bad explosion, Prim ran into the crowd to help an injured child. Another explosion followed, killing Prim and other medics and also burning Katniss pretty badly.

The last word Prim ever spoke was Katniss' name — a fact which totally made me bawl like a baby when reading it. It wasn't until after the war, when Katniss and Peeta returned to District 12 and planted several primrose bushes, that Katniss began to heal from the loss of her sister. She kept Prim's memory alive by writing about her in her book with Peeta, and the rest, as they say, is history. An incredibly sad history, but war and revolution have many prices, and Prim paid one of the harshest.

What's perhaps most moving is the fact that Prim's desire to help others was what led to her own demise. That such a selfless act could lead to such catastrophic endings is shocking and heartbreaking, but something tells me Prim wouldn't have wanted it any other way. In fact, it somewhat brought things full circle, as Katniss volunteered for the Hunger Games in the first book in order to spare her younger sister from such a harsh fate. That she found such a fate much later, albeit under different circumstances, was really profound, and incredibly sad.