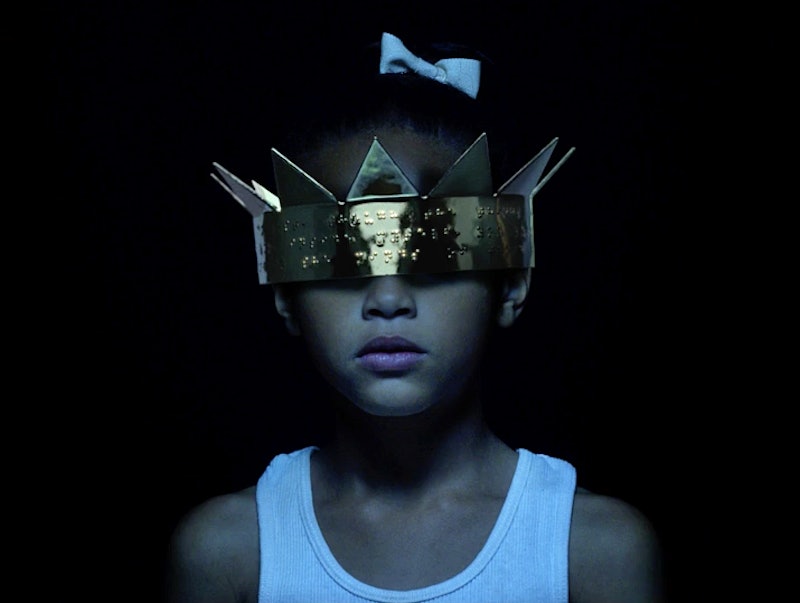 Put on your detective hats, Navy: Rihanna's ANTIdiaRy videos are here, and they're full of mysterious (and somewhat confusing) imagery. "Wait, what is Rihanna's ANTIdiaRy?" you may be asking yourself. Don't fret, I'll fill you in on all of the details: Rihanna unveiled ANTIdiaRy.com last Friday in partnership with Samsung. According to Hits Daily Double, the website will give fans "exclusive access" to "and information" about Rihanna's long-awaited new album, ANTI . As predicted, the 27-year-old superstar officially launched ANTIdiaRy during the American Music Awards on Sunday evening with a series of strange video clips that aired during commercial breaks.

In case you missed them, here's a brief recap of the clips: The first clip features lots of flashing images and braille, and ends by asking fans, "Are you in?" The second clip takes us into a child's bedroom where a map of Barbados and "Robyn Rihanna Fenty" (Rihanna's full name) are scrawled on the wall in crayon. The third clip depicts children hiding under a white bed sheet. The fourth clip shows Rihanna hiding under the bed sheet with two children while a third plays the piano in the corner of the room. Then, things get really weird...

Two of the children back away from Rihanna down a dark hallway. Just outside the bedroom door, Rih finds an old brass key on the floor with a tag that reads "R8." After she picks it up, the hallway takes on a strange blue glow, and the two children disappear. In the final moments, a young girl with a crown covering her eyes (see: the ANTI cover artwork) emerges from the shadows. It's more than a little eerie. Check it out below.

Fan website RihannaDaily.com notes that the phone at the start of the clip flashes the words "wake destiny" in braille. Also, Rihanna has no tattoos. Perhaps the bedroom represents the beginning of her career. Perhaps it mirrors her childhood bedroom in Barbados! (After all, crashing ocean waves are heard outside the window.) This might explain why Rih's shown without her signature tats. Finally, the color blue seems to hold special significance here: the old rocking horse has bright blue eyes, and the hallway glows blue at the end of the clip.

Blue is often seen as a tranquil, peaceful color. Interestingly, the ANTI cover artwork (above) is bright red! Red is often seen as an aggressive, passionate color. Maybe Rihanna is trying to illustrate how the tone of her life has changed since becoming a global superstar.

According to Noisey, the ANTIdiaRy is separated into five different rooms: the bedroom, the studio, the closet, the tattoo parlor, and the gallery. One of the final promo clips (below) appears to give us a glimpse into these other areas.

Right now, when you visit ANTIdiaRy.com from a mobile device, you can only enter the bedroom. (Presumably, the other rooms will be unlocked one by one.) Exploring the bedroom will eventually lead you to the Instagram account for "iamthekeyholder." Currently, the account has posted 13 different images of a child with a crown on her head drawn in various locations throughout the United States. Whether this is some sort of "scavenger hunt" for fans remains to be seen. The ANTIdiaRy has certainly raised a lot of questions so far, but unfortunately, it's given us very few answers.

As a die-hard Rihanna fan, I'm excited about ANTI; however, I'm not so sure this ultra-complicated rollout is the best strategy for the LP. At this point, after all of the rumors and uncertainty surrounding the release, I think most people just want to hear the music. Still, I hope the ANTIdiaRy will be able to drum up some additional hype for the project. Stay tuned for further developments.

More like this
Taylor Swift Wanted To Be In 'Twilight: New Moon,' According To Its Director
By Grace Wehniainen
Twitter Is At Odds Over Taylor Swift’s Possible ‘All Too Well’ Oscar Run
By Brad Witter
What Is Ben Affleck's Net Worth? At 50, The Oscar Winner Makes 8 Figures Per Film
By Meg Walters
Someone Must Pay For What Happens To Bad Bunny In 'Bullet Train'
By Arya Roshanian
Get Even More From Bustle — Sign Up For The Newsletter