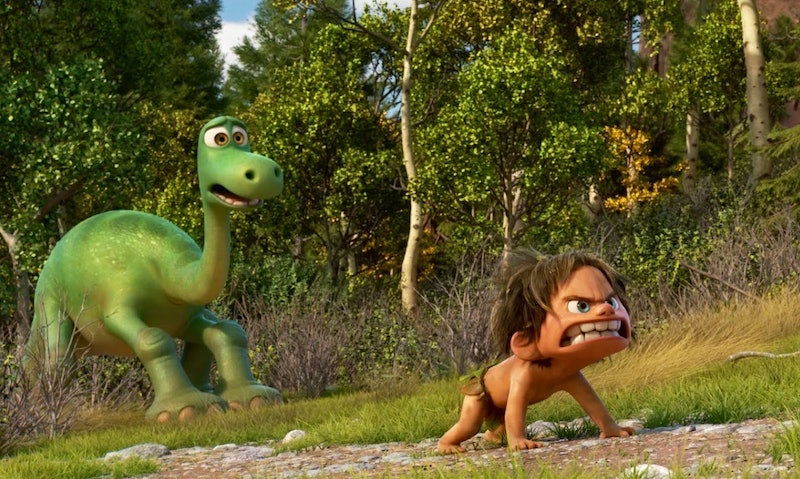 Spend a few moments rooting through the comments section of The Good Dinosaur’s IMDb page and you’ll find a ton of threads devoted to hating on the central plot of humans and dinosaurs living side by side. It seems as though the Internet has taken particular issue with the science of the latest Pixar venture, trying to poke holes in, and snidely remark on the merits of, a story about mild-mannered dinosaur Arlo and his feral boy sidekick Spot's journeys together through a prehistoric world. Sure, people on the Internet will find any excuse to complain about anything, but it's kind of surprising that everybody's not yet used to movies and television shows about people living with dinosaurs. After all, a good third of the planet’s population saw Jurassic World.

In fact, Pixar’s forthcoming family epic joins a long, long line of works of fiction devoting to placing man and the most revered of natural history’s beasts in the same place at the same time. In many of these films, the result is nothing but mayhem and disaster — most often for the feeble humans, powerless against reptilian tyranny. In others, it is the dinosaurs who suffer under the weight of humanity’s terror. And, of course, we cannot forget those optimistic movies that preach peaceful cohabitation is possible between humans and dinosaurs. Here’s a look back through some of pop culture’s most significant works.

The movie: A 1914 animated short by Winsor McCay.

The humans: McCay himself, who remains off-screen the whole time, claims to be the owner of the only dinosaur in captivity.

The dinosaurs: Gertie is McCay’s trained brontosaurus, who performs tricks on command.

The all-in-all: If real world dinosaurs suffered the same fate of poor Gertie, we’d need a reptilian equivalent of Blackfish. If this short is any indication, it’s lucky for the lizards that they never had to put up with human overlords.

The humans: A troupe of scientists, sportsmen, and journalists who set out to South America to rescue a missing explorer.

The dinosaurs: A race of would-be monsters that have been hanging out on a single plateau in the mountains of Venezuela.

The all-in-all: Despite humanity wandering onto the dinosaurs’ private territory, neither race really causes much of a problem for one another. Scenes of attack and danger in this picture are mostly dino-on-dino, with only a mysterious ape-man causing direct trouble for the human explorers.

The movie: A 1933 fantasy film starring Fay Wray and the Empire State Building.

The humans: A team of showmen looking for the perfect specimen for their New York publicity stunt.

The dinosaurs: Play second banana to King Kong, though they admittedly terrifying creatures who, like the Lost World dinos, never stray too far from their home on Skull Island.

The all-in-all: Humans don’t pose too much of a problem for the dinosaurs, who are more immediately concerned with fending off the assaults of the giant ape in their midst. (Granted, he tries to attack when his beloved Ann Darrow is threatened by a hungry T-Rex.)

The movie: A 1954 Japanese disaster film that kicked off a never-ending line of sequels, spin-offs, and reboots.

The humans: Post-War Japanese civilians and scientists trying to protect their city.

The dinosaurs: Just Godzilla, who is less a traditional dinosaur than a dinosaur-like monster enhanced by nuclear radiation.

The all-in-all: As definitively unsympathetic as the Godzilla character is in this movie, the Japanese film makes no bones about his origins. Even when saddled with the just-minding-our-own-business-when-suddenly… thing, the humans don’t get off totally scot-free.

The TV show: A 1960s animated sitcom that somehow made the phrase “Yabba Dabba Doo!” a part of pop culture lexicon.

The humans: Working class cave people who basically look to The Honeymooners for plot and character inspiration.

The dinosaurs: A vast array of pets and household appliances, working blankly without more than the occasional gripe of, “It’s a living.”

The all-in-all: Stop using live pterodactyls as can openers, people! That’s barbaric! How on Earth did we root for these jerks?!

The TV show: A 1970s children’s fantasy program with one of the catchiest theme songs in prehistory.

The humans: A family of three — Rick Marshall and his kids Will and Holly — who fall into a parallel universe in which dinosaurs, Pakuni, and Sleestaks roam free.

The dinosaurs: Pretty much unbothered by their human visitors, and happy to share their caves with them. The exception is Grumpy the T-Rex, who is occasionally hungry for people meat.

The all-in-all: Discounting the dangerous of tyrannosaurus hunger pangs, Land of the Lost proves that humans and dinosaurs can indeed live happily, side by side… Just not here on Earth, but in an alternate, primitive reality.

The movie: A 1993 game-changer in CGI and adventure fantasy, directed by Steven Spielberg.

The humans: Scientists, entrepreneurs, and park-goers, who all want to see big, mean dinosaurs running wild.

The dinosaurs: Genetic abominations brought back from the dead after millennia against their own wills, and that of nature itself.

The all-in-all: Well of course it goes awry. And then again in the sequel… and again… and again…

The TV show: A 2011 sci-fi series that didn't last longer than one season.

The humans: Select members of the human race, circa the 21st century, transported back in time to a prehistoric era to salvage the still naturally vibrant planet.

The dinosaurs: Really didn't offer much in week-to-week drama.

The all-in-all: Dinosaurs kill people; people kill dinosaurs. Even the most environmentally conscious members of the human race seem incapable of not getting in the way of their hungry neighbors.

Maybe the IMDb commenters are right; whenever people and dinos meet up, only trouble yields. Sometimes, we're the victims, but, surprisingly, it's the giant lizards who suffer at our hand more frequently. However, I wouldn't count The Good Dinosaur out. It looks not only adorable and heartwarming, but also like it will soon be the best example of successful co-habitation between people and dinosaurs in a long time.