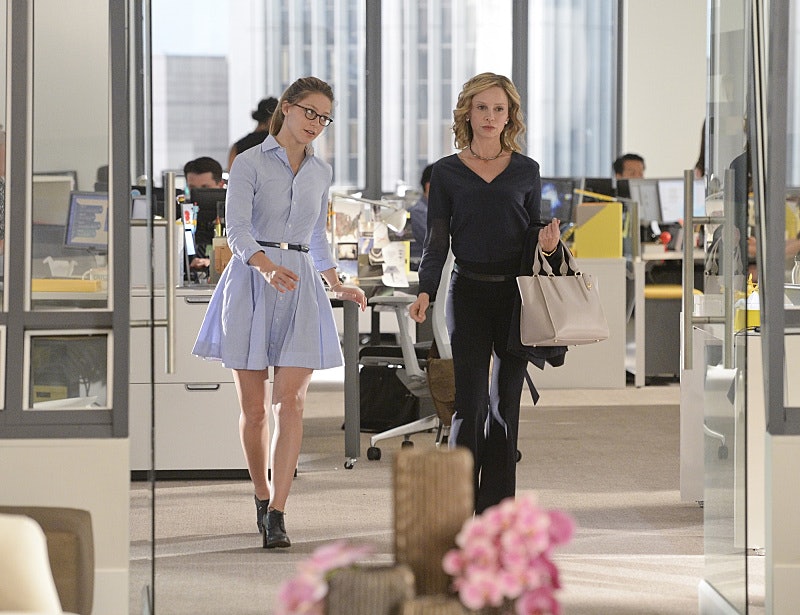 One of the best things about Supergirl's first season is the way that it lightly takes apart sexist tropes, from ancient to recent, while serving up awesome action, mysteries, and character development. I honestly wish I had been able to watch this show when I was growing up, because it would have stopped me from ingraining a lot of problematic ideas about gender roles that I am now having to unlearn. This week, Supergirl is titled "How Does She Do It," which should get into breaking apart and perhaps even redefining the ever annoying concept of "having it all."

It is always supposed to be a surprise that women somehow manage to "balance" careers, families, and/or personal lives — the assumption is that we, unlike men, can only handle one or the other. It is assumed that we must be in a constant state of juggling. No mere mortal woman could manage this balance without some kind of superhuman feat. Tina Fey points out in Bossypants (and the New Yorker) that when she is asked "how do you juggle it all," the person asking always seems accusatory, as if to say "you're screwing it all up, aren't you?" There's no question that this is prime material for a show like Supergirl, which features an actual alien with superpowers, to pick at.

In Monday's episode, the concept is already being twisted in that, according to the official CBS press release, "Kara's two identities are stretched thin when Supergirl must protect National City from a series of bombings and Kara is tasked with babysitting Cat's son, Carter." So that's a domestic/work balance right there... except the domestic duties are not her own and being a vigilante is not what she's being paid to do. Babysitting is actually a really clever way to poke fun at traditional gender roles on this series, especially since Kara does not have a ton of mainstream adult responsibilities. The work/love balance is also hinted at in the episode's promo. Check it out.

"Between saving lives and saving her love life," the promo says, "can Supergirl have it all?" Even though I'm sure the episode will deconstruct this, as they did with "girl" versus "woman," phrases like "adorkable," and Cat baiting Supergirl with questions that the Ask Her More campaign would scoff at in an interview, it's still kind of gross to hear that stereotypical voice over. How does she do it? Simple, she's not from Earth. I think the truth behind this dated question, how does a woman do/juggle/balance/have it all, is that few of us as human beings, regardless of gender, can excel at everything all the time. As a Kryptonian, Kara Zor-El has an advantage on our planet in the strength, flight, and laser vision department. However, even she has a lot to learn, and Supergirl is sure to explore her own relatable hardships while knocking down sexist ways of thinking in the process.