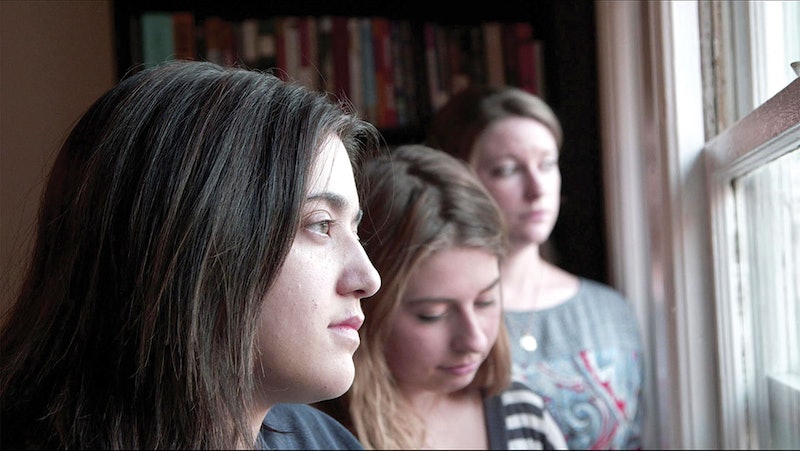 Since its premiere in February at the Sundance Film Festival, The Hunting Ground has aired in front of state and national politicians, at high schools, and on college campuses around the country. The documentary, which shares the stories of sexual assault survivors and college activists working to reform universities' methods of handling accusations of assault, even aired on CNN Sunday night — and, as Hunting Ground director Kirby Dick and producer Amy Ziering tell Bustle, the air date couldn't come at a more opportune moment. Falling just before Thanksgiving, the viewing offers families reuniting over the holiday a foundation to begin often-uncomfortable discussions about sexual violence, and what steps students, parents, officials, and society at large can take to remedy the culture that allows assaults to go unreported and untried.

Earlier in the month, the film was confronted with threats from the legal team of one of the alleged perpetrators, the now Tampa Bay Buccaneers quarterback Jameis Winston, whose story from his days as a college student at Florida State University is featured in the documentary. On Friday, Winston's legal team wrote a letter to CNN calling the film "defamatory," saying that it "manipulates, misstates or simply omits facts to present a false narrative," according to The Hollywood Reporter. The president of Winston's alma mater Florida State University, John Thrasher, has also decried the film, stating, "We simply could not let stand an inaccurate or incomplete picture of the university’s conduct." Yet CNN pressed ahead, screening The Hunting Ground in spite of the letter and telling The New York Times that "We are confident that both the film and our extensive associated coverage give this important issue the full and fair treatment it deserves."

As presented in The Hunting Ground, fellow FSU student Erica Kinsman came forward with allegations against Winston that claimed the athlete assaulted her on Dec. 7, 2012; Kinsman claimed that Winston raped her after a night out and alleged that he and others possibly drugged her drink. When she reported the alleged crime, she received intense backlash (including death threats) from fellow students, Tallahassee residents, and even ESPN officials, as seen in The Hunting Ground. Winston, meanwhile, was never charged, and has claimed that the sexual intercourse was consensual. In 2014, a lawyer for Winston, David Cornwell, told The New York Times that “We don’t need an investigation, thorough or otherwise, to know that Jameis did not sexually assault this young lady.”

The accusation against Winston is one of the most publicized cases presented in the film, and it has continued to develop even after the movie's premiere. Kinsman filed a Title IX lawsuit against FSU in January 2015, and then filed a separate suit against Winston himself in April, according to Deadspin. The Tampa Bay Times reported that Kinsman stated Winston's behavior "went beyond all possible bounds of decency and was shocking, atrocious and utterly intolerable in a civilized society." Winston retaliated with a counter-suit in May that stated Kinsman "has mounted a false and vicious media campaign to vilify Mr. Winston with the objective of getting him to pay her to go away."

Just before the film aired on CNN this weekend, FSU President Thrasher critically compared The Hunting Ground to the infamous Rolling Stone piece about an alleged assault at the University of Virginia. Dick responded in The Hollywood Reporter, explaining the filmmakers' rigorous vetting process for the stories they tell. Coincidentally, its CNN screening also comes as the Rolling Stone controversy has independently emerged once more: The fraternity, where a UVA freshman was allegedly raped according to the now-retracted story, filed a $25 million lawsuit against Rolling Stone earlier this month.

The Hunting Ground is essential viewing that sheds light on how widespread the problem of college assault really is: According to a recent CNN survey, 23 percent of female college students reported unwanted touching, and 11 percent reported that this included penetration or oral sex. That's not to say it's exclusively a women's issue — The Hunting Ground takes care to include the stories of male survivors, too, though they're in the minority of sexual assault victims. The filmmakers believe that while the movie may have its critics, they can't argue with what they consider simple truths.

"There's been people out there for a long, long time trying to misrepresent the facts, to skew the statistics that continually come in of one in five, one in six sexually assaulted again and again," Dick says. For example, one Slate piece attempts to deconstruct the narrative of Kamilah Willingham, one of the survivors who speaks about her own assault in The Hunting Ground. "We weren't quite as aware of how vociferous [the response to the film] would be," Dick adds. Ziering, meanwhile, criticizes those she calls "rape denialists," saying simply, "There are facts. There are truths."

Here are a few of those facts: five percent of women on college campuses are raped or nearly raped each year, according to a 2013 study by the American College Health Association; and according to a 2000 study by the United States Department of Justice, less than five percent of these are reported to law enforcement; and approximately two-thirds of assaults are committed off-campus.

The filmmakers add that outspoken attacks can discourage additional survivors from coming forward with their stories, further contributing to the stigma around rape and sexual violence. Yet both Dick and Ziering think that progress has been — and will continue to be — made, due in part to the film. Senator Kirsten Gillibrand, for one, has cited the documentary as impetus for legislation addressing disciplinary penalties for campuses that fail to properly deal with sexual assault. Dick notes that New York Governor Andrew Cuomo screened the film to state legislators before passing the state-wide "Enough Is Enough" bill in June, which aims to create guidelines across colleges and universities for a "uniform definition of affirmative consent, a statewide amnesty policy, and expanded access to law enforcement," according to the state's website.

In the time since its release, the film has become a powerful platform for discussing and illuminating assault among students. Ziering tells the story of one high school where the movie played for a senior class. The DVD broke mid-way through the screening, and the teacher was about to dismiss the class when one young woman stood up and requested that the class stick around to discuss slut-shaming, harassment, and violence. "The film ... gave people ground and courage to sort of talk candidly," she explains.

Only time will tell what the full extent of the documentary's effects will be, but as of now, it's clear that The Hunting Ground is spreading a crucial message — and people everywhere are listening.