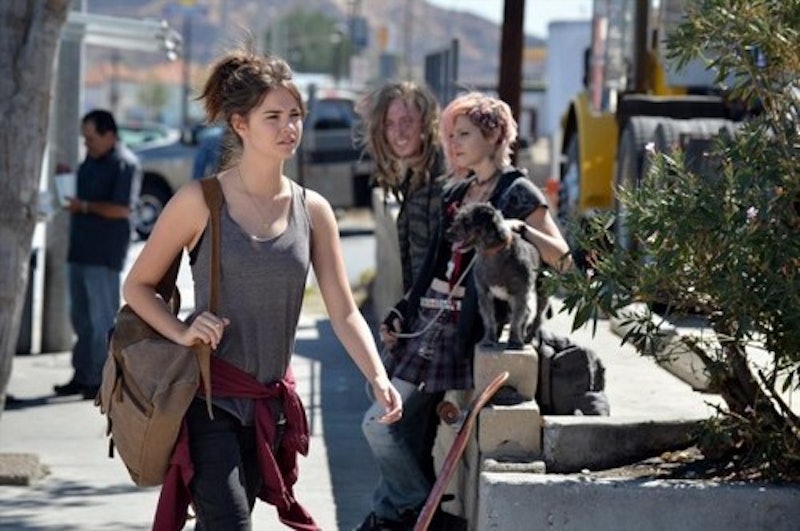 Before The Fosters took its midseason break, Stef and Lena got married, Jude caught Brandon and Callie smooching, and Callie ran away with Wyatt. Monday night, the episode dealt with the ramifications of Callie and Brandon's actions. The only person who knows about Brandon and Callie is Jude. Eesh. I hope the pressure of the secret isn't too much for sweet, sweet Jude.

Post-wedding, the family enjoys breakfast. There's a lot of talk regarding wedding decoration cleanup and Lexi going on a two-week Honduras trip. Wait a second. Where's Callie? Brandon is dying to know where Callie is. Jude says she's at a guitar lesson, but we know she's actually on the lam with Wyatt. Wyatt wants to know why she's running away. She doesn't really give him an answer beyond "I need to be in charge of my own life for once, you know?" They drive. A road sign tells us they're leaving California. UH OH.

At some point on their road trip, Callie and Wyatt pull over to check out a UFO crash site and eat green snow cones. Wyatt regales her with his theories regarding aliens and time travel. I like this side of Wyatt.

Brandon tries to have a heart-to-heart with Jude, but Jude is like, "Psh, you're a turd who's going to ruin everything for our adoption with your kisses." Brandon is like, "But what about Wyaaaaatt?! Wyatt's the one who's ruining everything!" Jude tells Brandon that Brandon's like Liam. (Way harsh, Jude!) Brandon gets MAD and says, "I'm nothing like Liam. I love Callie." Brandon. BRANDON. Take it easy. You love Callie? I'm sorry. I'm being a jerk. But I can't help it. I can't deal with Brandon being in love with Callie.

Stef's mom bought Stef and Lena a remote-controlled bed. It looks like two fancy hospital beds that were pushed together. She shows the bed (beds?) to Jude. Jude hops on one side of the bed, and Stef's mom hands him a remote control. Jude folds himself up in the bed and yells, "I'm a taco!" Jude is the best character on the show.

Jude notices that Callie's guitar is still in the house (not at guitar lessons!) and he pieces things together. He realizes she ran away. He tells everyone. Doin' work, Jude. Doin' WORK.

Wyatt receives a phone call from Callie's phone. He declines. Lena leaves a voicemail asking him to contact her if he knows anything. Wyatt looks torn. Aw, WYATT. You conspiracy theorist. Do the right thing.

The next morning, Wyatt goes to gas up the car. As he walks through the hotel parking lot, Lena and Stef catch him. Whaddya know? Wyatt called Lena and Stef. Wyatt did the right thing. Team Wyatt. Callie spots them from the hotel room window and makes a run for it. She escapes. She hitches a ride with a truck driver.

The truck driver drops Callie off in a town and she goes to a diner. She then tries to lie her way through a job interview. The guy interviewing her is like, "You don't have an ID and I've never seen you in this tiny town. Go home, don't be a runaway."

While Lena and Stef drive around searching for Callie, Mike takes care of Brandon, Mariana, Jesus, and Jude. Brandon and Jude are totally bugging over Callie's disappearance, but Mariana and Jesus are preoccupied with the Lexi Honduras trip thing. And by "the Lexi Honduras trip thing," I mean "the Lexi's moving to Honduras — SURPRISE! thing." Oof. Lexi tells Jesus and Mariana that her dad was fired for being an undocumented immigrant, so she and her family are going to Honduras for good. Jesus tells her he loves her and that he'll wait for her. OOF.

Callie catches a bus. She stays on it until the end of the line. She gets off the bus and wanders down the street. She sees a group of prostitutes. One of the women approaches her and offers a place to stay. Callie declines but does ask if she can borrow her phone. She uses it to call Lompoc Federal Prison. She asks the person on the other end when she can visit her dad. The person on the other end tells her her dad was released over a year ago. Well, crap.

Callie goes into a convenience store and eats snacks and drinks a soda without paying. The store clerk is like, "Stop, or I'll call the cops." Callie doesn't stop. The clerk calls the cops. AND THE EPISODE ENDS ON CALLIE SNACKING WITH RECKLESS ABANDON.