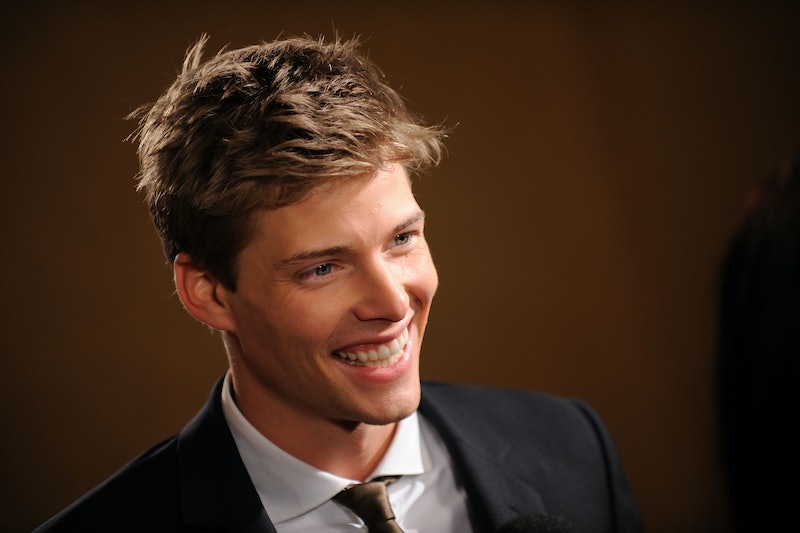 It's hard to imagine a time where the mere idea of a woman receiving her own byline on an article would be ludicrous, yet it's a time that is not too far into the past. This is simply how things are in the new Amazon pilot Good Girls Revolt, which is inspired by Lynn Povich's nonfiction book of the same name. The book follows the 1970 gender discrimination lawsuit against Newsweek magazine, which the series has fictionalized elements of for its story. In the series, the women of the fictionalized News of the Week are relegated to researching articles that they will receive no credit for, and are convinced that they should be grateful to have a job in journalism at all. It's only when Nora Ephron (yes, that Nora Ephron) quits the magazine due to the injustice, that the other women in the office start to realize that something needs to change. But what of the men in the office, who benefit from the status quo? Hunter Parrish stars as Doug, a News of the Week writer who must find out where he stands in this fight.

Doug is the love interest of Patti (Genevieve Angelson), a free spirit finally understanding how unjust News of the Week's practices are. Will Doug follow Patti down that path? "[Doug's position] is to represent that guy who stands on the tightrope walk, who wants to support [Patti] for her ambition and support her, but spent 28 years with a traditional mindset," Parrish explains. Should Good Girls Revolt receive more episodes from Amazon, Parrish hopes that fans attach themselves to Doug's journey: "I hope that Doug walks the line for as long as possible, because that's what I find interesting about characters. He could so easily jump over to be supportive, but then we have already won him over and the people watching him have nothing to learn."

Though Good Girls Revolt is certainly a story of women finally getting what they are long overdue, it's also concretely based in historical fact: Patti goes to San Francisco to cover the 1969 Altamont Festival riot, a real event that had a deep cultural impact on the peace movement. "I think one of the great things about the show, especially once we get to have more episodes to tell more of the story, is that it's not going to be a black and white girl power type thing," the 28-year-old actor says. "[The goal] was to take this era... and tell this story with amazing characters who represent different ways of life — who are still relatable today." In that way, the show will illustrate how women made an impact on history, not because there's any agenda behind that — simply because that's how it happened.

That's not to say that the show doesn't give women incredible role models — if anything, Good Girls Revolt is a reminder of the importance of making waves when faced with injustice. "[Good Girls Revolt] has the ability to be an important conduit for conversation. I think we'd be failing ourselves if we didn't note how important this could be for young women," Parrish says. "People don't want to be lectured to, they just want to enjoy a great story. If it happens to be the story of strong women, then how great [is it] that it can impact people today?"

More like this
'Brookside' Is Coming Back & Soap Opera Fans Are Going Wild
By Sam Ramsden
24 History-Making Black Women You Probably Didn't Learn About In School
By Ayana Lage and JR Thorpe
25 Inspiring Quotes From Black Women To Celebrate Black History Month
By Kyli Rodriguez-Cayro and JR Thorpe
Twitter Is Identifying With Sally Field & Jane Fonda’s Friendship In New Viral Video
By Jake Viswanath
Get Even More From Bustle — Sign Up For The Newsletter
From hair trends to relationship advice, our daily newsletter has everything you need to sound like a person who’s on TikTok, even if you aren’t.