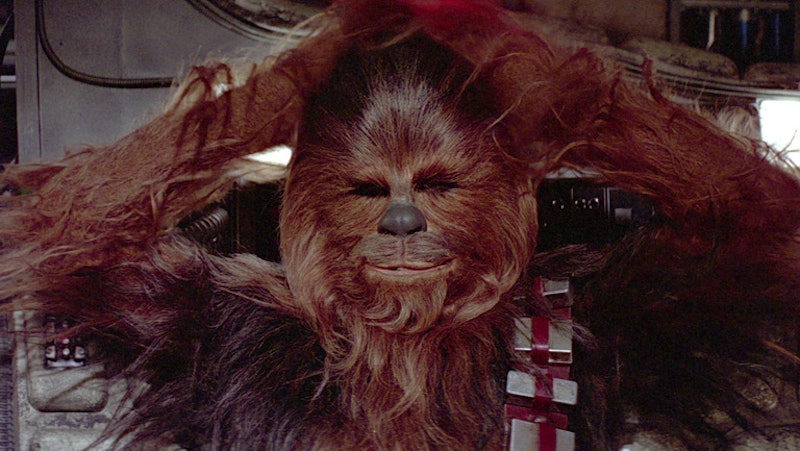 The new Star Wars movie, The Force Awakens, is tantalizingly close to its highly anticipated release, and fans come up with more questions about the film with each passing day. Who are the new characters? Which old characters are returning? How old is Chewbacca in The Force Awakens ? OK, that last one might not be the most pressing in regards to the story, but it doesn't make it any less interesting. Chewbacca wasn't exactly young in the first Star Wars movie, so he's got to be super old now. But just how old is he?

Unfortunately, it's not like Chewbacca's age can be determined with a quick Google search — it takes a little sleuthing. For starters, you've got to understand how the Star Wars calendar works. Their years are organized with the monikers BBY and ABY, similar to BC and AD in real life. These acronyms stand for Before the Battle of Yavin, and After the Battle of Yavin. What was the Battle of Yavin, you ask? It took place in the first Star Wars movie, A New Hope, and concluded when the Death Star was blown up. So now that you know how the calendar works, you can use it to determine Chewie's birth year.

Though the movies never state Chewbacca's age, he's listed in multiple other sources as having been born in the year 200 BBY. This means he was celebrating his bicentennial in A New Hope, so he was no spring chicken. Chewie's last chronological on screen appearance was in Return of the Jedi, which takes place four years after A New Hope, making Chewie 204 years old at the time. Which brings me to The Force Awakens.

The new film takes place 30 years after the Battle of Endor, which occurred in Return of the Jedi, making it the year 34 ABY in The Force Awakens. So once you add 30 and 204, you come up with Chewbacca's current age, which should be 234 years old. However, it turns out his age might be a little more complicated than that, since he died at the age of 225.

Star Wars has a rabid fan base, so to service them, a lot of licensed novels have come out during the decades-long gaps between films, known as the expanded universe. One of these books, The New Jedi Order: Vector Prime, released in 1999, takes place in the year 25 ABY. In it, Chewie accompanies Han Solo and Han's son, Anakin (wut), to the planet Sernpidal, which was on a collision course with one of its moons. Chewie ends up being crushed by the moon, while Han and Anakin manage to escape. So sad.

Since his death took place nine years before The Force Awakens, it's safe to say that the movie negates the events of that book. And according to the new official Star Wars canon policy as of 2014, none of the expanded universe material is considered canon anymore. In other words, it didn't happen. This creates a bit of a gray area, since Chewie's age has never officially been revealed in any of the canon material (the movies, Clone Wars, and Rebels TV shows, basically), which kind of puts me back at square one.

But until I'm told otherwise, I'm going to trust my calculations that Chewbacca is a lively 234 years old in The Force Awakens, and I've got to say, he looks great. Not a gray hair in sight! So he's either got great genes, or that's some dye job.