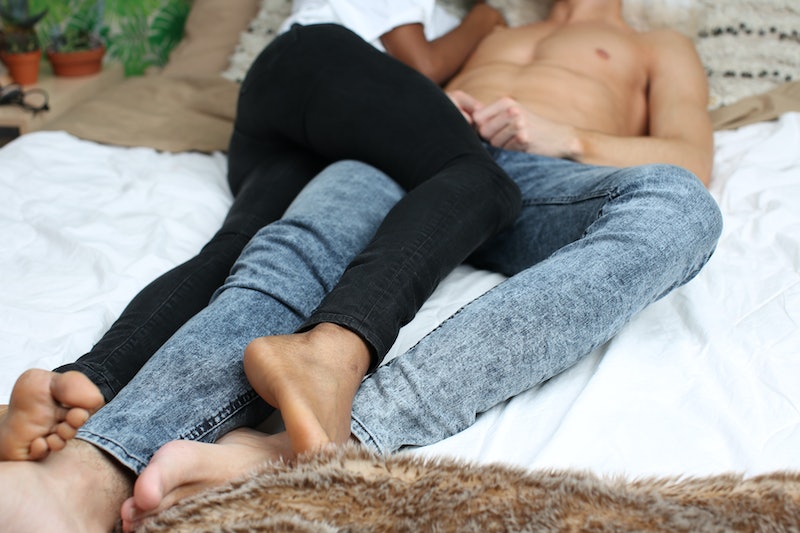 It can happen to the best of us. It’s not technically a lie, but it’s not exactly the truth. It floats just in between, in that grey area with everything else on which you’ve yet to make a firm decision. It's that moment when you've told someone you loved them...even though you didn’t quite mean it.

It’s OK — you’re not a bad person. You’re just, perhaps, mildly conflicted. Maybe you don’t want to rock the boat with the messiness of the precise truth or you’re the type of person who puts the feelings of others before your own personal obligation of stating factual information. Whatever the reason, you’re not alone. We’ve all, at some point in our lives, said “I love you” and not entirely meant it. But, as they say, “It’s better to have never loved but said you did, than to have never said it all,” or something.

Here are a few reasons you may have found yourself saying the L-word without fully meaning it — and in doing so, immediately complicated the shit out of your relationship.

1. TO PROVE TO YOURSELF (AND OTHERS) YOU’RE CAPABLE OF LOVE

What the hell is love anyway? Is it something we’ve convinced ourselves we must feel in order to be "normal?" Is it a bunch of chemicals in our brain doing their thing just so we, as humans, will respond accordingly, settle down, get it on, make a baby, and keep the species alive and kicking? Can anyone say, without a doubt, that they know for sure that they've absolutely, positively been in love before? Maybe all that fuzziness in your head and butterflies in your stomach wasn't love at all. Maybe it was just a stomach bug, or a bad cold, or food poisoning. But whatever it was that made you feel dizzy and slightly sick, you decided to label it love because you felt the need to belong and be like everyone else who claims to know the inner workings of the L-word. So, with your stomach in your throat, you rushed to your partner's house so you could say it, too.

2. TO CONVINCE YOURSELF YOU’RE OVER YOUR EX

You’ve been seeing someone for a few weeks, or maybe even a few months, but you’re still hung-up on your ex. When you’re not out with this new individual, you’re doing the usual online stalking of that person who broke your heart and making a mental list of all the things you’ll say to him or her should your paths cross again. You’re hell bent on getting over them, but you just can’t, no matter how awesome this new person is. So, in order to speed up things with your new relationship and hopefully close the emotional chapter on that dickhead ex who never deserved you anyway, you say it.

You’ve been dating someone for a while now. You’re not sure where it’s going, and you’re not really at that point in your life where you care. Your partner is great! Really! But maybe not the best match for you. He comes when you call, he listens to you cry over trivial things that you’ll be over in 24 hours, and he makes you laugh. So when he pulls you aside one night to tell you his true feelings, you respond accordingly. You weren’t raised to be rude.

4. TO SEE IF YOUR PARTNER LOVES YOU

Oh, woe is you! Despite all your cunning attempts at coaxing from him a confession of his undying affection, you're left wondering where you stand. You want answers, dammit! You want to know if you should be imagining your new hyphenated name or reactivating your online dating profile! Although you’re not even sure if you’re in love, you figure you might as well test the waters to see if they're warm and welcoming or distinctly chilly.

This particular technique a lot of us learn as youngins when we realize we can sweetly manipulate our parents to get whatever toy or second helping of ice cream we so very much desire. As we get older, we understand that, although a complete asshole move, we can continue to get something out of the situation if we play our cards perfectly. A few flutters of our eyelashes, a bite of the lower lip, an “I love you,” and you’ve got whatever it is you wanted.

6. TO THROW SOMEONE A BONE

The two of you have been broken up for months, but your ex just can’t seem to move on. Can you blame him or her? You’re a catch and a half, so of course they’re up every night crying into their pillow over you. After much begging on their part, you agree to go to dinner… where you’re told over and over again how much you are loved. Your response? “I love you, too.” Why? Because you’re a nice person, and not a big fan of being part of public breakdowns in places where people are just trying to enjoy their Chicken Cacciatore.

You can blame it on alcohol, lack of sleep or stress, but there was just something about that particular romp and subsequent mind-blowing orgasm that made you scream out the L-word. So, you did, and now you feel weird, because you’re kind of a liar, or at least you are until the next time you climax like that.