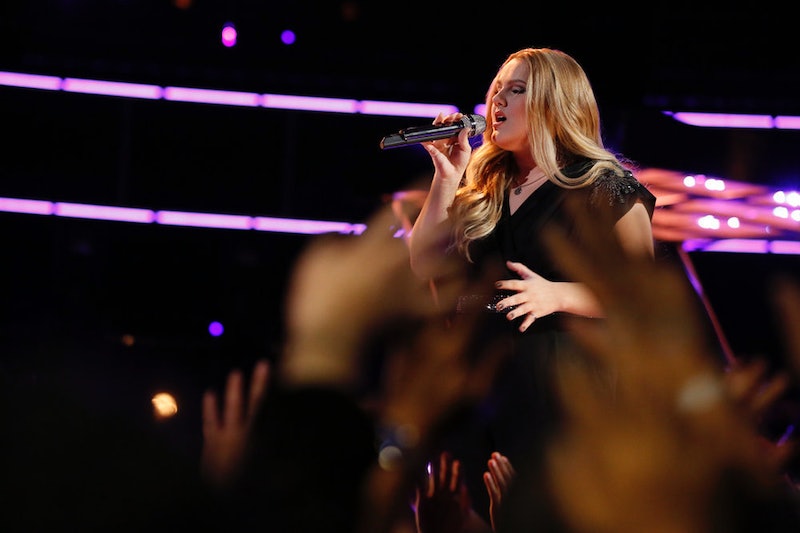 Coaches often offer their team members incentives for good performances on The Voice, but none have been more strange than what Adam Levine promised Shelby Brown for a job well done — a giraffe. Yes, you read that right. Much like parents promise their kids a pony for a stellar report card, Levine promised Brown he'd get her her own giraffe for a killer performance. And guess what? He has to deliver on that promise.

Brown has impressed since her Blind Audition, but she completely changed the game with her Top 11 performance to Lady Gaga's "You and I." Lady Gaga is in the same category as Adele and Beyonce in that she should not be touched in these singing competitions, but Brown did her justice by completely nailing the vocals and making the song her own. The small town singer was also able to tailor the lyrics to incorporate her home state of Alabama, which gave the song a personal feel. Brown filled the stage with an energy that electrified the audience and set the stage on fire. It was her best performance yet — and definitely giraffe-worthy.

Up until this point in the competition, Brown has kind of fallen to the background for me. Though she gives great performances week after week, nothing she has done has been particularly memorable or noteworthy. That all changed tonight. Brown has positioned herself as a major player in this game with her electric performance of "You and I." My previous thoughts that she would be eliminated sooner rather than later have since vanished. Her performance was certainly Top 10 worthy, if not Top 8 and beyond.

So what of the giraffe? For her sake, I hope Levine follows up on his promise. I don't know where one buys a giraffe, but I'm confident that if anyone can find one — it's Adam Levine.