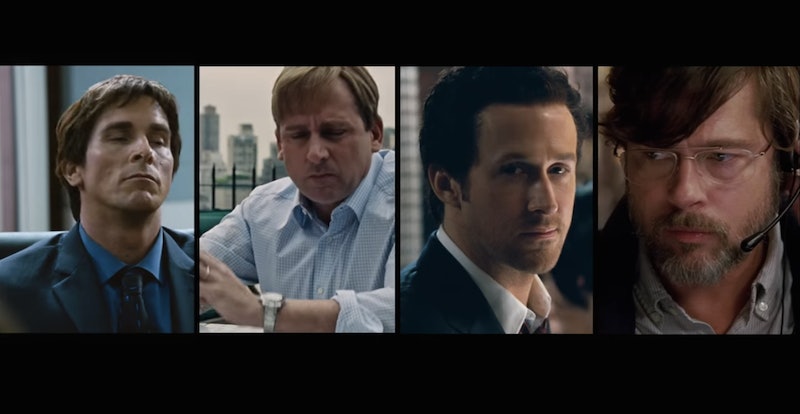 If you've always wanted to see Ryan Gosling, Brad Pitt, Christian Bale, and Steve Carell all in one movie, then you must be waiting for the release of The Big Short with bated breath. The Adam McKay-directed film stars all four actors in a story that tells the epic tale of "how their characters’ bold investment leads them into the dark underbelly of modern banking, where they must question everyone and everything," according to Deadline. A new trailer for The Big Short was released on Monday, and, in it, the stakes have never been higher. How can you tell? Because of all the dramatic shots of everyone looking deeply unhappy, nervous, anxious, angry, or scared that decorate the trailer, of course. Nothing says "high stakes" like Ryan Gosling taking a phone call in a bathroom.

Since this is the second trailer, we can focus less on the weird hair that everyone is sporting and focus more on the dramatic tension of what these guys are trying to do. And, believe me, the tensions are hitting a breaking point in this trailer. You might want to sit down for this one. Take my hand, and let me take you through some of the most dramatic shots in The Big Short — at least, from the footage we've seen so far.

1. Steve Carell Panics In The Car

Also known as the face you make when you've left the house and realize you left the oven on.

Not that every word out of the Gos' mouth isn't important, mind you.

3. Brad Pitt Is Taking This Seriously

Although it might be hard to see his expression underneath all that hair.

This really does seem like a job for Batman, though.

They could be discussing how the banks committed fraud, or they could be having a serious discussion about how many licks it takes to get to the center of a Tootsie Roll Pop.

5. Ryan Gosling Takes A Call In The Bathroom

Something I would do, and have done.

They're determined to find an answer.

9. Ryan Gosling Comes In With The Snark

No tense meeting is complete without sarcasm.

10. The Boys Are Taking Action

Whether that action is effective still remains to be seen.