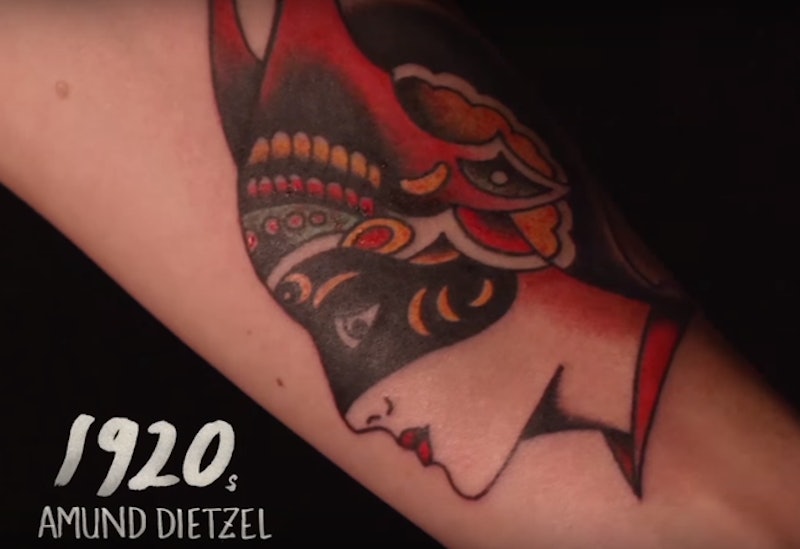 One-hundred years of history, 11 tattoos, one woman. If this sounds like a recipe for Cut Video's latest installment in their 100 Years Of Beauty Series, then you're totally right. Cut Video released 100 Years Of Beauty: Americana Tattoo featuring one brave woman receiving, yep, 11 tattoos. Each tattoo represents the tattoo trends of a particular decade.

Cut Video's #100YearsOfBeauty series has proven to be not only wildly entertaining but also extremely educational. They team at Cut not only transforms models decade by decade, but also provide insight into what exactly helped to shape the beauty standards of that time. While tattoos are highly personal and individualized, this video shows that there were certainly trends that influenced the popular ink of the times.

Major props to the one Casey Lubin for having the guts to get tattooed 11 times in one week. But, as you'll soon see, her courage paid off. These tattoos are absolutely breathtaking, and the fact that they all represent different points in history only makes them more fascinating. Ultimately, I think Lubin said it best: "If your body is your temple then you should be able to decorate it the way you want, right?"

Let's check out all the individual tattoos from each decade, and then watch the video.

The profile of this figure is drop-dead-gorgeous, and I love the tones of the reds and yellows. The artist, Amund Dietzel, was known for painting these figures with varying characteristics.

This design is definitely one of my favorites. This may have been popular in the 1930s, but it's still definitely beautiful today.

In addition to beautiful sketches of boats and marine life, tattoo artist Paul Rogers was also known for his sailor girl designs.

This fun bird tat would definitely brighten anyone's day. I know it did mine!

This wrist tattoo is definitely one of the smaller scale pieces Lubin received. That being said, it's equally as artistic and pretty as the larger ones, especially with a symmetric pattern.

But really, what's cooler than getting a mythical creature tattooed on your bicep?

Another bird was added to Lubin's collection — also perched, singing a song.

This beautiful design makes up another one of the bigger pieces. The pink, red, and purple shades are absolutely stunning for this hip tattoo.

The playfulness of this tattoo is really what makes it stand out from the rest. A well-dressed skull with empty eyes? Sign me up.

And for current day, what other than a cat tattoo? What I really like about this one is that it's almost as if the cat were admiring and looking up to Lubin, from its position on her shoulder.

Let's take a peek at the video now, shall we? Because this is what tattoo dreams are seriously made of.