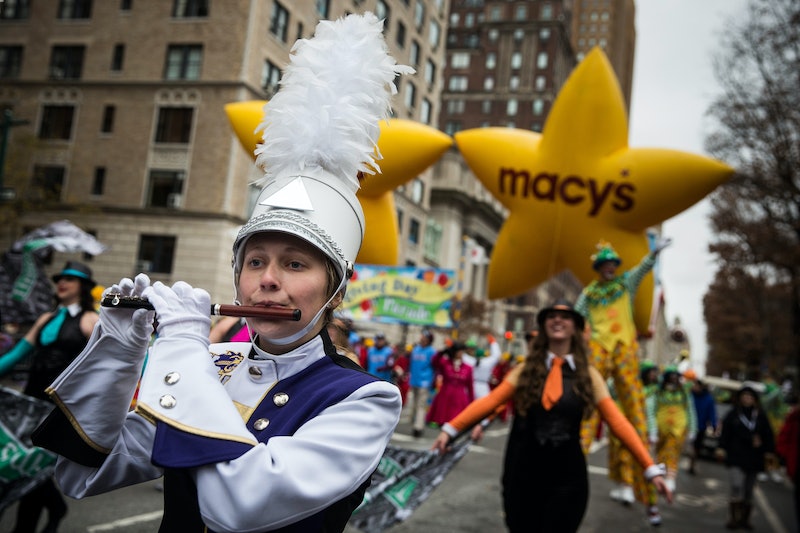 There's nothing like getting up early on a holiday and ringing in the end of the year with the Macy's Thanksgiving Day parade under the comfort of your favorite cozy blanket. What channel is the 2015 Macy's Thanksgiving Day Parade on? Whether this is your first time watching or you want to mix it up, you actually have multiple options.

The Macy's Thanksgiving Day Parade is traditionally broadcast on NBC from 9 a.m. to 12 p.m. It's essentially the longest episode of the Today Show all year, hosted by Matt Lauer, Savannah Guthrie and Al Roker. The phrase "let's have a parade" practically belongs to them. There will be performances from several Broadway shows, the upcoming live televised and star-studded production of The Wiz, and your favorite celebrities in their best winter weather fashion — which is actually pretty rare, considering that most musicians and actors tend to chill on the West Coast.

That said, you are not bound to NBC for the morning. During the same time slot, CBS broadcasts its own coverage of the parade with parade highlights and competing additional content. Their coverage is hosted by Keltie Knight and ET host Kevin Frazier. It was announced on Tuesday that Justin Bieber will not perform as scheduled. However, this is especially important for musical theatre fans. If the live NBC performances aren't to your taste, CBS will have in studio performances from Jersey Boys and Beautiful: The Carole King Musical as well as appearances by Allegiance's George Takei, Wayne Brady, who is now starring in Kinky Boots on Broadway, and Renée Elise Goldsberry from Hamilton. I'm not too surprised that Broadway's hottest new show won't be performing in the parade, it's not exactly family-friendly, but it's nice that a Hamilton actress will represent the show on CBS.

So, you can stick to the traditional parade coverage on NBC, check out some different perspectives on CBS, or channel flip between the two for a customized experience. The Rockettes aren't everyone's style, I get it. We all have to pass the time waiting for Santa Claus to show up somehow. Heck, if you have Periscope, I bet there will be plenty of cool people live-streaming from the parade as well. No matter what you choose, the 2015 Macy's Thanksgiving Day Parade is sure to be as spectacular as ever.