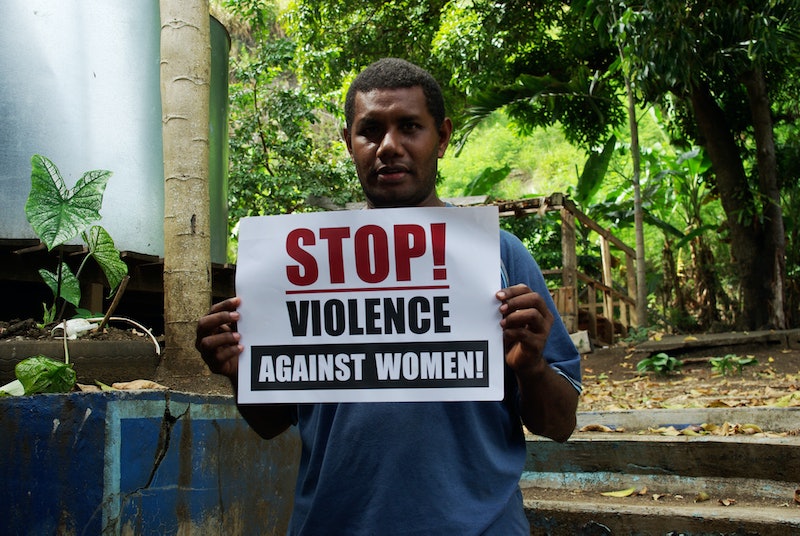 Tomorrow, Nov, 25, is the International Day for the Elimination of Violence Against Women. The United Nations has designated the day to spread awareness about common forms of violence disproportionately committed against women, such as sexual assault and intimate partner violence; this year, the theme of the day is prevention. Violence against women affects many of us indirectly, if not directly, simply because it is so common — so we can all play a role in changing it if we understand what's happening and what we can do.

With these goals in mind, the UN is also initiating the 16 Days of Activism Against Gender-Based Violence campaign, which includes a series of orange-themed events using gender-based violence's symbolic color to spread awareness. These events have already included a parade of tuk-tuk drivers wearing orange in Cambodia and an orange lighting of Brazil's Presidential Palace. Advocates who aren't able to organize an event can still talk about violence against women using the hashtag #orangetheworld.

If you search through the conversations on Facebook and Twitter, you'll find a lot of important information, all of which is definitely worth knowing. These seven facts are a good place to start, though — because understanding violence against women is the first step towards working to prevent it.

1. One-Third Of Women Worldwide Have Been Victims Of Physical Or Sexual Violence

This means that, for every three women you know, it's likely that one of them has experienced violence. According to the World Health Organization report, most of this violence happens at the hands of intimate partners.

2. Nearly 5 Million People Are Victims Of Sex Trafficking Each Year

According to the International Labour Organization, 98 percent of these people are women and girls.

3. Nearly Half Of All Women Have Been Psychologically Abused By An Intimate Partner

According to the National Intimate Partner and Sexual Violence survey, this is true for nearly half of men as well.

4. Half Of Women Who Were Killed In 2012 Were Murdered At The Hands Of Partners Or Family Members

This means many women are not safe even in their own homes. Partners and family were the culprits for only one of twenty men were were murdered, in contrast, according to the UN.

Only 52 countries outlaw rape within marriage, according to the UN. You may not think they'd need to, since marital rape should be covered under standard rape laws, but you'd be wrong. In the United States, for example, some state laws have exemptions for spouses, and in other cases, courts may consider marital rape a lesser offense.

Six months after the "Don't Be That Guy" campaign launched, with posters like the one above hung around Vancouver, the city's sexual assault rate dropped by 10 percent. In addition, an educational program in Kenya created lasting changes in men's attitudes toward women and reduced their belief in rape myths.

The "Ring the Bell" campaign, which includes the video above, encourages bystanders to come to their neighbors' doors if they hear or see signs of domestic violence. According to The Pixel Project, this can pause domestic violence in the moment and give you an opportunity to witness what is happening and report it.