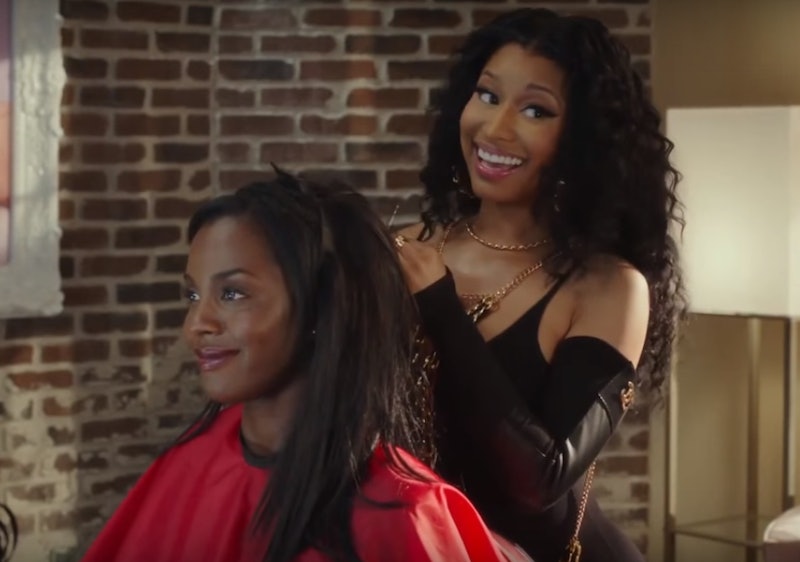 You might think that a white dude living in the North West of England might not fully "get" every joke in the south side of Chicago-set Barbershop series of films, but my dad is a big fan. As a teenager, I was besieged by quotes from the film (mostly those spoke by Cedric the Entertainer's iconic character, Eddie), and so it's easy to see how the movies have managed to get a third film made; they have undeniable universal acclaim. So it's terrific news for fans of the Barbershop films that the Barbershop 3 trailer has finally been released online, and that it looks just as hilarious as the previous two movies.

Starring Barbershop cast regulars such as Ice Cube, Eve, Sean Patrick Thomas, as well as the aforementioned Cedric the Entertainer, the film also has some contemporary on fleek talent involved — such as the spectacular Nicki Minaj and Tyga. From the trailer, it looks as though the film is being forthright in tackling the gang culture troubling the south side of Chicago, as well as the economic difficulties which many Americans are currently struggling under (it looks as though the salon from 2005's Barbershop spin-off Beauty Shop has been combined with the legendary barbershop to help save both the businesses).

But that's not to say it doesn't deliver in discussing these issues whilst still maintaining it's own brand of humor. Here are six of the best moments from the trailer which gave us a bad case of the giggles.

1. Eddie Has No Time For On Fleek

Minaj's character, Draya, gets excited about a delivery of food and calls it on fleek, much to Eddie's chagrin. He recommends that she reads some books to find out about some other words, "There's a library down the street! You won't see 'Fleek' in there nowhere!"

In discussing how bad crime has become in the area, one character confesses to being the victim of a double robbery, "I got robbed twice and got my ass kicked by the second robber for giving all my money to the first!"

3. Crime Can Give You Some Real Perspective On Life

When a shooting happens right outside the barbershop, everyone jumps down to the floor for safety. One character, in a panic, screams "I don't want to die a virgin!" Which we can only imagine must result in an eternity of taunts from his barbershop buddies afterwards.

4. It's Also Not Always Worth Straining Your Body For Survival

Though everyone else gets down on the floor for safety, Eddie remains standing. Ice Cube's character, Calvin, demands he also get himself down on the floor to which he responds, "I ain't getting down there, it'll take me too long to get back up." Classic Eddie.

5. Sometimes It Pays To Look Good

OK, so this is Minaj playing up her outstanding posterior once again, but it's still a pretty killer line. Draya gets questioned about how she can possibly spend so much money on her appearance and still have money for the rent, to which she confidently responds "This hair and this booty? It's like walking around with a black Amex... and I never get denied." BOOM.

In a scene definitely inspired by the 2014 viral video in which a mother gave her son a terrible haircut for being "bad," Eddie cuts a super embarrassing style into a young boy's hair for being disrespectful to his mom. "He won't be talking back to his mama no more," he laughs before indulging in a victory dance.

Barbershop 3 is due for release on April 16, 2016. And you'd best believe that I'm already preparing myself for the onslaught of Eddie quotes that my Dad will deliver during our weekly phone call. Bring it on, pops.