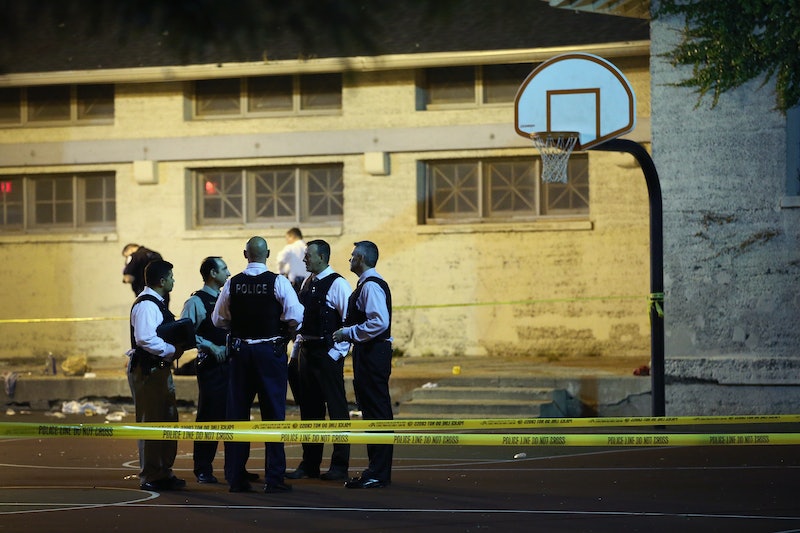 In what was just one in a series of Chicago shootings last night, 13 people —including a 3-year-old boy— were shot Thursday night at a basketball court in the South Side. The lack of fatalities at the court (so far) is "a miracle," according to Chicago Police Superintendent Garry McCarthy.

High-powered rifle shots broke out around 10:15 p.m. last night at the court in Cornell Square Park, located in the city’s high-crime Back of the Yards neighborhood. As those on the court tried to find cover, nearby residents hit the floor in their own homes.

"We had multiple victims shot, who were transported to various hospitals throughout the city," said James Mungovan, deputy district chief of the Chicago Fire Department. Sixty officers were present at the peak of police operations at the crime scene.

Four of the victims are listed as in serious condition, and the others are listed as stable or good. One adult has already been treated and released. However, three victims, including a 3-year-old boy, remain in critical condition.

Three-year-old Deonte Howard was wounded in the head as a bullet passed through his ear and out his mouth, luckily avoiding any brain damage.

The three-year-old’s uncle, Julian Harris, 22, witnessed the shooting, saying that men in a gray sedan fired at him before turning to the park and shooting at people there.

"They've been coming round here looking for people to shoot every night — just gang-banging stuff,” he told the Sun-Times. "It's what they do.”

Though no one's been taken into custody yet, the Rev. Corey Brooks, who is close to Howard's family, says that there are "people who know exactly who the shooter is" and that he shot too many people to remain anonymous for long.

It's not known if anyone hit was an intended target.

Seven other shootings also occurred throughout Chicago's South Side last night, bringing the total number wounded up to 18 and adding two fatalities. Police have yet to determine if any of these attacks are related.

Even though Chicago bans possession of handguns, the city has the unfortunate distinction of being the nation's murder capital, racking up more than 500 homicides in 2012 alone, according to an FBI report issued this Monday. (New York City, with three times the population of the Midwestern capital, had 419.)

The frustration with these overwhelming statistics is evident in victims' families' responses to the shootings. Howard's grandmother lashed out to police on the scene, saying "You police can't solve s**t."

Occurring just days after D.C.’s Navy Yard shooting Monday, these shootings will undoubtedly play a role in the nation's reignited gun control debate. With the top gun violence rates in the nation but also some of the strictest control laws, pro-gun supporters are likely to point to the Chicago contradiction as evidence that banning guns doesn't stop shootings.

At the same time, pro-control supporters are likely to see the shootings as illustrating the need for even stricter control and enforcement.

The tide might well turn to center the gun control debate on mental health — a conversation both parties seem prepared to get behind. (Granted, this conversation would do little to address the gang violence that allegedly spurred the violence in the first place here.)