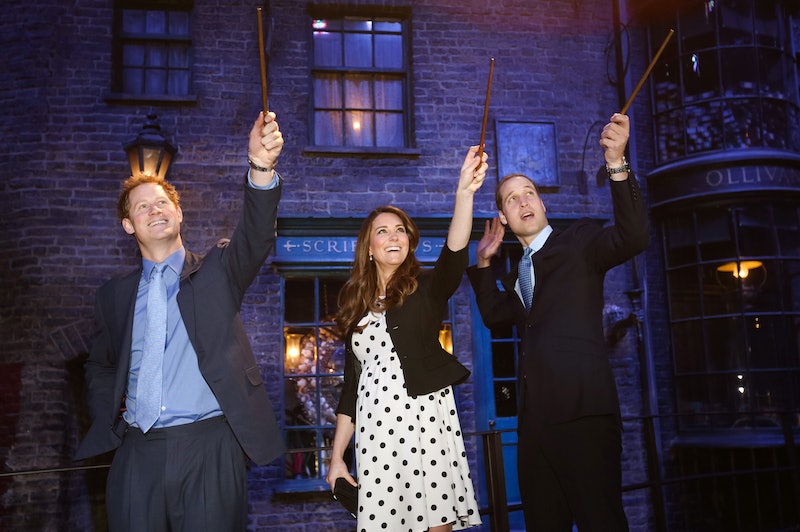 I grew up reading Harry Potter. I think I was around 7 when I read the first book, flipping through the pages underneath my night-light long after I was supposed to be fast asleep.

I pre-ordered the books, when I was old enough to know how to work Amazon. They arrived at my mailbox in cardboard boxes, and I would rip though them to get at my beautiful hardcover copy. I brought one to my brother’s little league baseball game, unable to put it down, and my mom still jokes about how the book was as big as I was as I sat there reading it.

Even though it was a children’s book, it meant so much more to me than that. I was always an avid reader (the librarians laughed when I would check out towering stacks of books, but you better believe I would read them all), but somehow this series was different. It was magical. From the moment I began reading Harry Potter, I knew it wasn’t your typical kid’s story. The fact is, there are reasons that so many of us picked up the books when we were younger… and then never put them back down.

But maybe the point is that there is more to children's books than we even realize. As Madeleine L'Engle says, “You have to write the book that wants to be written. And if the book will be too difficult for grown-ups, then you write it for children.”

1. The Books Grow Up As You Grow Up

Though many children's series stay decidedly within that realm, the Harry Potter series gets darker as the characters grow older. It's probably one of the reasons that so many of us love it so much: We literally grew up with the books.

Prejudice. The nature of evil. The power of love. The value of life. Sacrifice. Friendship. The cost of power. There are so many themes in Harry Potter that go beyond your typical children's story, or even adult story, fodder, and these are the themes which set it apart.

3. Rowling Planned More Than What's On The Page

A lot of books for kids are pretty straightforward, and they begin and end within the front and back covers. Not Harry Potter. As evidenced with all the extra information she's released on Pottermore, Rowling planned out waaay more than she included in the (already information-packed) series.

4. There Are Lots Of Characters

For many series, the main character is a hero displaying a lot of qualities Harry displays. But not all series have as many supporting characters, who are just as fleshed out. As a young know-it-all, it meant so much to me to read about Hermione Granger, another girl who loved reading as much as I did. For anyone who reads Harry Potter, there's probably at least one character you relate to — because there are so many to choose from!

5. The Humor Is Witty

Forget slapstick comedy or toilet humor (though, admittedly Fred and George do make a joke about a toilet seat). The humor in Harry Potter is witty and intelligent and more than just a quick laugh. As a kid, one of my favorite things about the series was how funny it was. And the nature of the humor was so creative.

6. The Series Contains Lots Of Backstory

Harry Potter is more Lord of the Rings than Goodnight Moon, because there's so much backstory. (Side note: Who is the old lady whispering "hush"?) There's information on everything from Voldemort's past, to the Hogwarts founders, to the Marauders. The story is layered.

7. The Parental Figures Are Realistic

A lot of kids' media either portrays parents as perfect and knowing the right answer 24/7 or fools who have no idea what hi-jinks their kids are getting into. Harry Potter doesn't fall into this stereotype; in fact, Harry goes through quite a lot as he tries to determine exactly who his parents were, and eventually sees them as the real, flawed yet heroic people they were.

8. The Characters Aren't Good Or Evil

Speaking of flaws: the characters in Harry Potter aren't, as many children's book (or any book, really) characters, all good or all bad. Even the heroes have flaws, and even the villains have redeeming qualities. Harry's stubborn. Draco is in over his head. Hagrid can't keep a secret. Umbridge is... I'll skip that one. But seriously, the characters are just that — characters.

Whereas unicorns and pixies and merpeople would probably be benevolent and sweet in a stereotypical children's series, in Harry Potter they're all across the board. Pixies are pests. Merpeople are mysterious. Unicorns are hunted. Perhaps this is why the magical creatures are getting their own spinoff series...

In some children's books, the ending is perfectly happy. No one dies, and the hero doesn't have to give up much to complete his or her quest. This isn't the case with Harry Potter, and even though we all still feel heartbroken over our favorites who gave their lives for the cause, it gives the ending more weight. The heroes had to give up so much, because their quest meant so much.

11. The Books Inspired So Much More

From Pottermore to the Wizarding World of Harry Potter to the world of the fandom, the Harry Potter series inspired a story to leap off the page and into our lives.