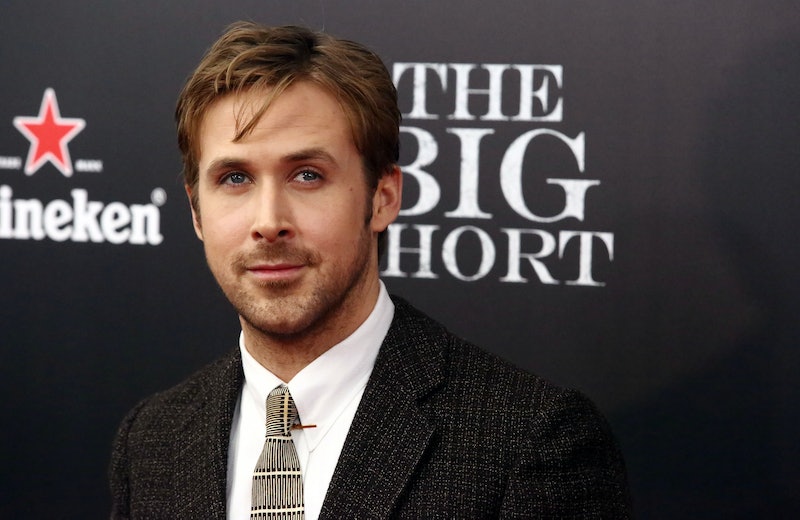 If I really sit and think about it, I realize that I can't pick a favorite Ryan Gosling movie. He's done so many good ones over the years and is so good in every one, so how could I possibly choose? The Notebook would have been too sappy with anyone else in the lead male role, and Drive would have put me to sleep without Gosling behind the wheel, so to speak. Basically, he makes every movie he's in that much better, and it helps that he plays such varied and interesting characters. But never one to stunt his own growth, he seems prepped to take on potentially his biggest and best role yet: Gosling might play Neil Armstrong in the astronaut's upcoming biopic. Have you ever heard anything more perfect?

According to deadline, First Man is still being written, but Gosling is in talks to take the lead role. That move would make sense, as well, since the project is being directed by Damien Chazelle, who Gosling is currently working with on Los Angeles musical La La Land. Nothing has been set in stone either way, but it makes a lot of sense and something tells me Gosling would do an amazing job.

First Man is based off James Hansen’s biography First Man: A Life Of Neil A. Armstrong and Armstrong's historical Apollo 11 mission in 1969. Josh Singer, who wrote Spotlight, is writing the script, while Temple Hill partners Wyck Godfrey and Marty Bowen are producing. I'm a sucker for a true story, myself, and I also love NASA and our nation's history of space exploration, so this is right up my alley, and I think it will be for a lot of people. Add in the possibility that Gosling could be playing such a legendary figure, First Man is already going to be a winner — and possibly even an Oscar contender.

I'm probably getting a bit ahead of myself, of course, but I can't help it. I love Gosling as an actor and I love biopics and putting the two together makes perfect sense. Armstrong is an incredibly smart, brave, and adventurous man, and having Gosling bring him to life on the big screen would be something I think more than a few of us would pay good money to see. Now let's keep our fingers crossed that it actually happens.