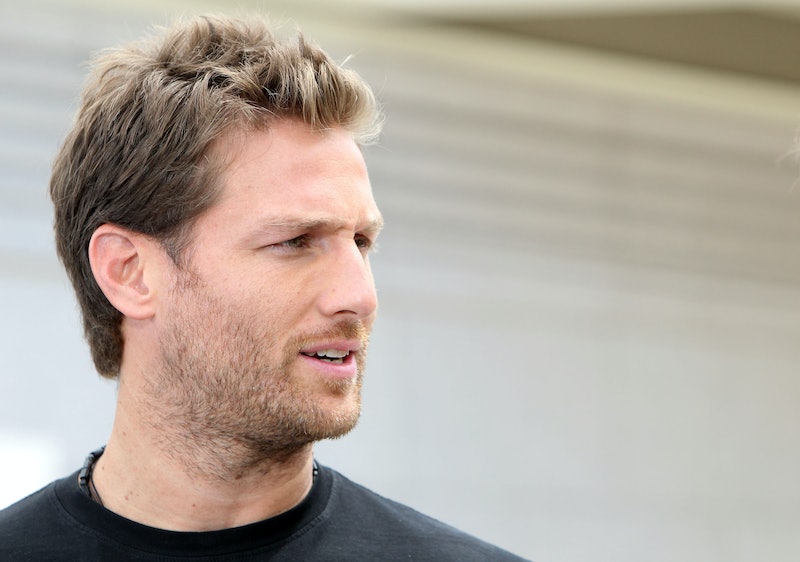 I know everyone thinks Victoria was the crazy one on last night's Bachelor episode, but the real over-the-top award goes to the people in charge of censoring the show's nudity. I think more money went into paying people to edit black bars over the women than was spent setting up the winter wonderland date for Clare and Juan Pablo. I understand that with a contestant like Lucy who is, shall we say, comfortable with her body, you might have to to do some censoring since I don't think she even owns a bathing suit top. But she gets that, and she self-censors a lot with her long hair (see photo above) but even that's not good enough for ABC.

Instead, the producers of the show went way over the top with the frequent censoring and the large black bars made the wrong kind of statement. It doesn't make the girls, Juan Pablo, or the show look good. Let's take a look at some of the censored moments of the show and decide if they were necessary or not:

When talking about her upcoming date, Lucy said: "How am I going to get Juan Pablo's attention? Well I can't do this...."

Verdict: Necessary... probably. Maybe she was wearing a bra? Or, alternatively, the producers could have chosen to feature a different girl talking about her excitement for the date. But sex sells, so they stuck with Lucy and her free spirit breasts.

Verdict: Not necessary. There's like a zero percent chance she was walking a dog down an L.A. street completely naked. That's actually illegal. These black bars were total overkill as I'm certain she's wearing at least underwear. “If you’re walking down the street naked, you’re going to be arrested," Los Angeles Police Sgt. Gary Leffew said of the public nudity law in L.A. “Use some common sense.”

Verdict: 1000 percent unnecessary, for two reasons. One, Andi's sign covers her lower half the entire time in this shot, so her second black bar is totally not needed. Second, these girls are wearing underwear. In the picture Juan Pablo posted today of the final photo result, both girls (even "I love being naked" Lucy) are wearing underwear and everyone's privates are covered by signs as they were intended to be.

So out of three of the censorship scenes in last night's show, two were unnecessary, and one could have simply been cut. So the question stands, why all the projected nudity? With shows like Naked and Afraid, and reality TV spinning down a drain of boob flashing (I mean, Dance Moms had flashing on it, and that's a show about moms who have daughters who dance), TV has devolved very quickly into a nudity-only zone, except in America we can't show this nudity because network TV is family-friendly. The irony.

I doubt a guy who loves his daughter so much is going to be thrilled that the Bachelor has painted him as a guy who hangs out with completely naked women, especially when they weren't completely naked. Even if he doesn't let her watch the show now, she'll stumble across it some day and she shouldn't have to see all the gratuitous topless Lucy shots, or the falsely-constructed naked photo shoot.

I can only hope that there's less of that as the season wears on because this is a show about accepting roses, magical expensive dates, and the creation of a love story –– not a Girls Gone Wild episode.