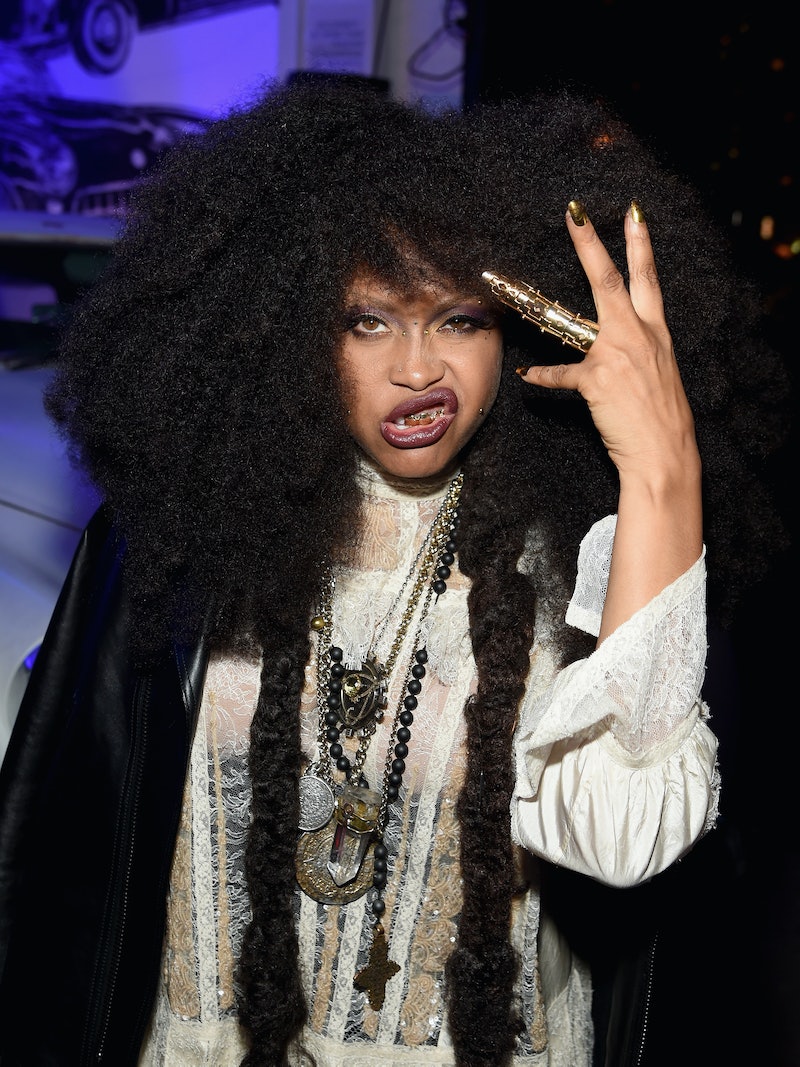 I've loved Erykah Badu ever since she released her debut album, Baduizm, back in 1997. Her smooth vocals, amazing beats, and overall chill vibes quickly made her one of my favorite artists, and she's remained one ever since. Unfortunately, she hasn't released any new material since 2010, when New Amerykah Part Two (Return of the Ankh) came out. It's been a long five years without any new Badu in our lives, but we got lucky last month, when she surprised us with a cover/remix of Drake's "Hotline Bling." It seems that track was part of a larger collection, as this week Badu announced her new mixtape But You Caint Use My Phone is coming out on Friday — and that's not even the best news.

Long-time Badu fans will recognize the album title from her hit song "Tyrone", which, despite not having appeared only on her live album (aptly titled Live), is one of her best known and most loved. The fact that she's bringing the love back nearly 20 years later is not only amazing, but pretty amazing, as well. But wait — the news gets even better. All 11 tracks on But You Caint Use My Phone are phone-themed, which could just be the first time an artist has released a concept album based on cell phones. Ugh, it's so good.

Below, I've ranked the 11 tracks based on title alone. Who knows what they're about, and who cares? Badu is back, and that's what matters.

This one appeals to me personally given that I hate talking on the phone. Text me, email me, send me a Gchat message... any of those are fine. But please do not pick up the phone and dial my number because I won't answer. Talking on the phone's the worst, and I'm glad Badu knows it.

Another anti-phone message, at least in my mind. Put the phone down, because no one likes talking on the phone anymore unless you're, like, 12. And even then, doesn't everyone prefer texting?

I have a feeling this song is going to be about a booty call. I mean, dial-a-freak? Sure, why not! That should be the only time you're picking up the phone, I suppose.

This should also be known as "I (Won't Actually) Call You Back," because if you actually get me on the phone and I manage to get you off, I won't be calling back. I'll probably text you instead and tell you I got busy. Again: talking on the phone is the worst!

My first thought is that this was an Adele cover, but that's unlikely. On the off chance that it is, however, I'm going to rate this one pretty highly on my list.

If you message someone and all they say in return is "hi," you're likely barking up the wrong tree and that person doesn't want to talk. I love the inherent shade (and conciseness) in this title.

While back in the day, this title might imply a bit of resentment, these days — at least in my eyes — it's actually a good thing. As in, you used to call me... before you realized that I hate talking on the phone and took the hint.

I don't know why this song sounds so good to me. Maybe it's just that it reminded me of "Mr. Tambourine Man" and that's not a bad association to have.

"Caint Use My Phone Suite"

These days, pretty much everyone has unlimited minutes, text, and data. But you still can't use my phone, because that's private property and I don't need you scrolling through all the photos of my dog.

I don't really know what this one is all about, hence the reason it's further down on my list.

"What's Yo Phone Number" is at the bottom of my list because I will never ask for someone's phone number. That is, unless they don't have iMessage, and then I guess I kind of have to.