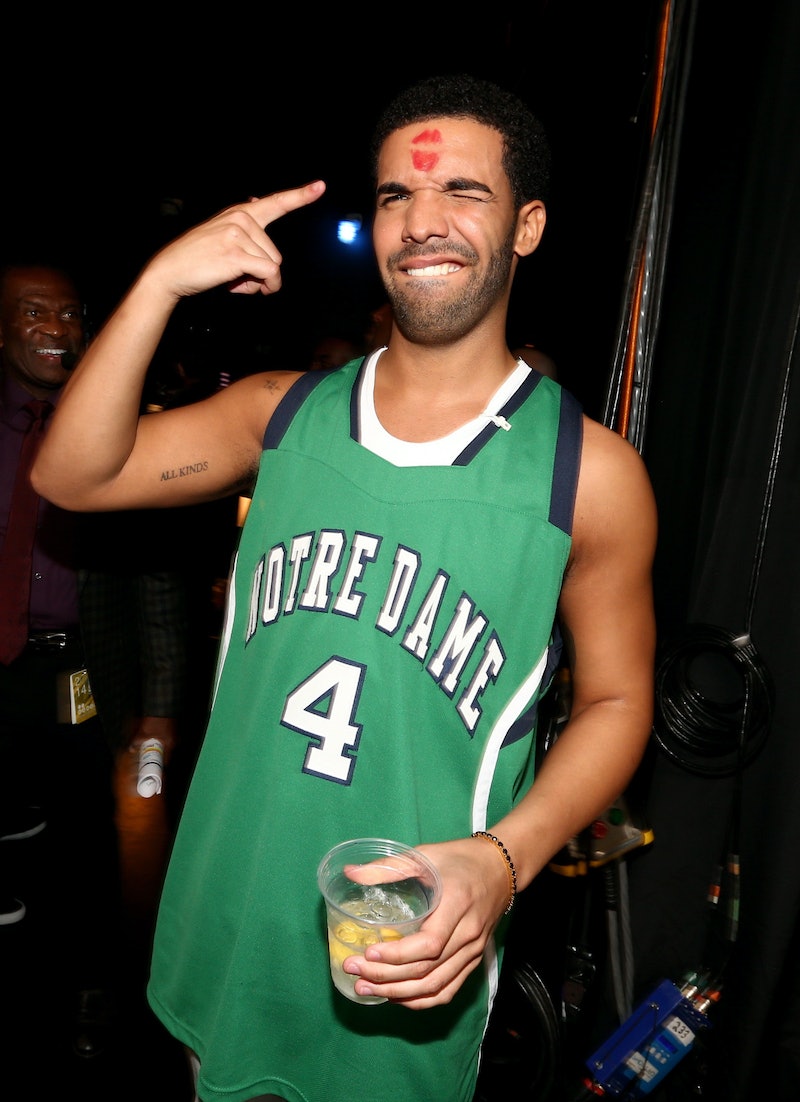 Drake really came through with the "Hotline Bling" video he released on Monday. Although the video includes James Turrell-inspired technicolor neon backgrounds, they still paled in comparison to the real centerpiece of the video: Drake's nerdy yet incredible dance moves. Fans quickly realized that Aubrey's moves were always on beat, and they repaid Drizzy for the amazing video with hundreds of "Hotline Bling" Vines, memes and mashups of Drake busting those dorky but adorable moves to everything from salsa music to the Frasier theme song. But don't worry: Drake knows he's a nerd, and he's embraced it. And it seems like the Internet is fully embracing it, too.

People are also loving the rapper's cozy turtlenecks and all the different lovely ladies he featured, but it was really his dance moves that won the world over. There are tons of hashtags to help you find videos on Twitter, Vine, and Instagram, including #DrakeDancesToAnything, #DrakeAlwaysOnBeat, and #DanceLikeDrake. There's even a whole, amazing Twitter account called @DrakeDancingTo, pairing the former Degrassi star's moves to literally everything.

Here are some of the best Drake parodies curated from all corners of the Internet, proving that dorky Drake moves are universal. I love you, Aubrey. Never stop dancing.

1. A Little Racket Action For Serena

Drake's been bulking up, probably to impress Serena Williams, so this Vine of Drizzy smashing it in Wii Tennis is perfect.

2. Drake's Moves Are Almost As Dorky As Elaine Benes'

In this mashup about nothing, Elaine joins Aubrey to show off her little kicks.

Drake is making it rain Pokeballs.

Drake would never be late with your pizza delivery. Blinging out that pie with pepperoni.

Carlton's moves are almost better suited to "Hotline Bling" than they were to Tom Jones' "It's Not Unusual."

That turtleneck you like is going to come back in style.

7. Drake Finds His Salsa Side

A lot of fans are thrilled that Drake seems super in touch with the part of him that loves all things Dominican, and proved it by pairing up his moves with all kinds of merengue and bachata music. But this mashup where he salsas to "Suavemente" by Elvis Crespo is the best by far.

One of the more controversial mashups is this one of Drake dancing to The Cosby Show theme, featuring Raven-Symoné .

And indeed, it's a Drake-yard smash.

Although, come to think of it, the "Hotline Bling" video kind of reminds me of Maya's video for the Rugrats Movie, "Take Me There."

Frasier Crane was also a lover of the finer things in life, like art and turtlenecks. And a total nerd. Hey Drakey, I hear the blues are calling tossed salads and scrambled eggs.

Naturally, Drake could fit in with the Peanuts gang with his moves, and he has a lot in common with Charlie Brown. They've both definitely got their woes.

Drake defeats the Dark Side with his dorky moves and his lightsaber.

Spock doesn't know what to make of this.

Much like myself, Drake was confused by how much he liked Bieber's new song "What Do You Mean?"

17. Is Drake Feeling The Bern?

A meme within a meme: Kanye dancing to "Hotline Bling."

You know Drizzy is a softie, especially for this Vanessa Carlton song.

21. Drake Is Definitely Stayin' Alive To The Bee Gees

And my personal fave: the infamous Spooky Pumpkin, busting those classic Halloween moves to "Hotline Bling." You're welcome.

More like this
Will Beyoncé Be At The BET Awards To Perform “Break My Soul” Or Attend The Show?
By Jake Viswanath
'The Summer I Turned Pretty' Using “Cruel Summer” Has Twitter Begging Taylor Swift To Release A Music Video
By Radhika Menon
Twitter Has *A Lot* To Say About Justin Timberlake’s Beat Ya Feet Dance
By Sam Ramsden
Fans Think Beyoncé’s “Break My Soul” Is Calling For A New Great Resignation
By Sam Ramsden
Get Even More From Bustle — Sign Up For The Newsletter