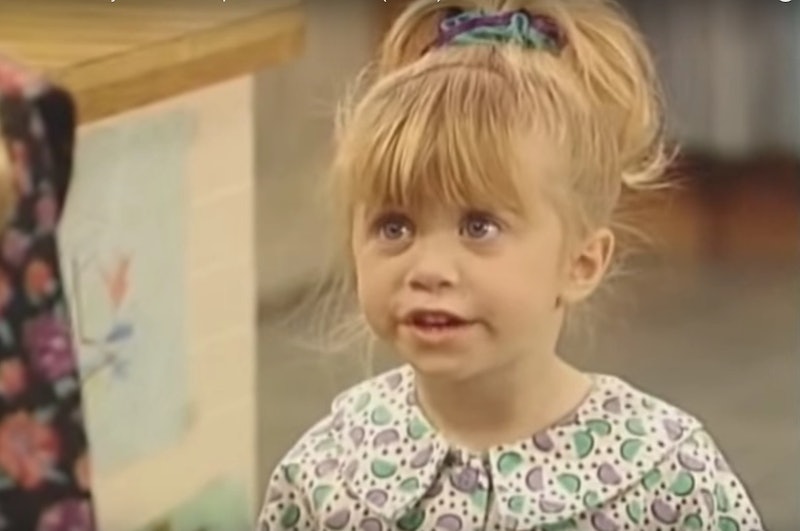 If there is one fact about '90s TV that has stuck with me all these years, it's this: Michelle Tanner knew what was up. The youngest of the Tanner sisters on Full House, Michelle was keenly aware of everything that was going on in the Tannerito household, inserting her bold, adventurous personality in every familial situation and always there to help plot away with her older sisters. With such sharp bravado and even sharper wit ("You got it dude" was a work of art, really), is there any question that Michelle Tanner would grow up to be a feminist?

Since Mary-Kate and Ashley Olsen won't be reprising their role as the best Tanner sister on the Netflix reboot Fuller House (still bummed about this, TBH), it's kinda fun to picture what Michelle Tanner would be like as an adult. Sure, she might not go around wagging her finger in everyone's face to let them know that they're "in trouble, mister," but she'd undoubtedly still bring out her #boss attitude in the right situations. In fact, Michelle would be even more badass than she was as a kid (if that's even possible, I know) — because she'd totally grow up to be an outspoken feminist. See for yourself.

1. She Was Raised In A Family Who Rejected Gender Norms From The Very Beginning

What gender norms? After her mom died in a car accident (RIP Pam), Michelle was raised by three men. No traditional, "mom-brings-up-the-kids, dad-brings-home-the-bacon" scenario here — Danny, Joey, and Jesse all pitched in to raise their three girls.

2. She Showed This Sexist Kid Who Was Boss

After some snotty boy dissed her for wanting to compete in a go-cart race because she was ~a girl~, Michelle showed him — proving that she was well aware of feminism and equality from the time she was a kid. Kill it, girl.

3. And She Had Her Two Older Sisters To Lead The Way

It pretty much goes without saying that DJ and Stephanie were some pretty awesome role models (you know, minus that time they tried to scheme Michelle out of getting those Counting Crows tickets), standing up for what they believe in — even if it was a difficult choice at the time.

4. Not To Mention Aunt Becky, Who Was A Badass All Her Own

Not only did Becky slay on Wake Up San Francisco every morning, she could also build a mean boxcar. So there, Kenny.

Yeah, it was sad AF when Vicky and Danny broke up, but Vicky ended things for the right reason: She just couldn't give up that opportunity in Chicago — it was her dream job. And though this may have upset Michelle (and the rest of the Tanner family) at the time, she'd later realize what a bold move it was.

6. She Could Manage Her Own Money From A (Super) Young Age

Sure, they were coins she found in between the couch cushions, but they were hers. And she knew, without a doubt, how she wanted to spend them. (Good call on the ice cream, Michelle.)

7. And She Never Let The Boys Get Her Down

Michelle may have attempted to become "one of the boys" after her friends Aaron and Teddy wanted to do the whole "boys only" thing, but she quickly learned that it's far better to be yourself— and not conform to any of those gender norms — than to just fit in.