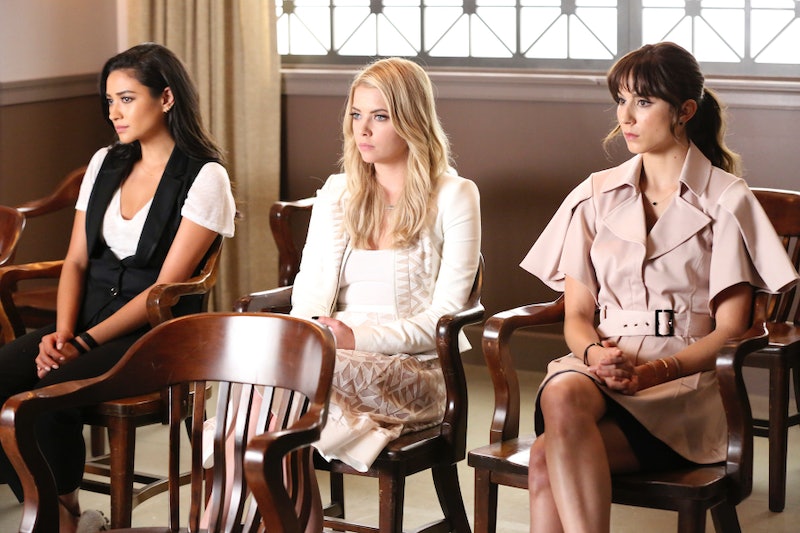 Pretty Little Liars addicts don't tune in to the show for their daily dose of comedy — we're watching the ABC Family series for mystery, intrigue, and, of course, Caleb. That's not to say that the show doesn't inspire its own particular brand of comedy. If you're a diehard Pretty Little Liars fan, you know that there are certain moments on the show guaranteed to make you laugh out loud — even if the series doesn't always intend for those moments to be as funny as they are. (Remember how everyone freaked the eff out at Sara's "I'm going to take a shower" line?) Fortunately, the internet is a goldmine for Pretty Little Liars jokes, which means that fans can laugh over this series even when it's on a ridiculously long hiatus. You know what they say: laughter is the best medicine for dealing with the lack of PLL in your life.

True Pretty Little Liars fans will get a kick out of these jokes that remind us that amidst the Liars' brushes with death, plenty of funerals, and countless A threats, there's always something to laugh at. (Yes, even Emily being locked in a box heading for a chainsaw can be funny, because like, did she die?) Here are 13 Pretty Little Liars jokes that will have true fans LOLing.

1. When The Laws Of The PLL Universe Were Super Confusing

Real talk: how is Shana dead but Jenna still alive?!?

2. When Emily Just Couldn't Contain Herself

Emily is the most cool and collected of the bunch, until she needs to make a reaction face.

3. When We Were All Casually Reminded Of Paige's Past

4. When This Metaphor Was Perfectly Illustrated

This is everything I have ever wanted in a picture.

5. When Hanna Needed To Look Up The Definition Of Blind

Really, someone get this girl to Dictionary.com, because it will save her from many awkward encounters in the future.

6. When We All Remembered Ezra's Weird Chickpea Thing

Because you can never have enough chickpeas in your abandoned cabin in the woods, right?

7. When Elle Woods Was You During An Ezria Moment

They were so cute until you realized that he started dating an underage teen so he could write a book about another underage teen.

8. When You Realized That Ali Had A Lot To Apologize To Aria For

There's probably about 15 more reasons she could name, but let's let bygones be bygones.

9. When You Remembered That Ali Doesn't Live By Yolo

It's basically a rite of passage for the DiLaurentis kids to fake their own deaths, to be honest.

10. When This Was So Accurate

Because let's be real, Pretty Little Liars has just as many characters come back from the dead as American Horror Story does.

11. When Aladdin Knew Our Struggle

12. When Shade Was Thrown At Aria's Hair Accessories

13. When Someone Summed Up Emily's Existence

Love you, Em, but you do give the best worry face.

A Pretty Little Liars hiatus may be tough to get through, but these jokes should leave you LOLing until the new season starts up again.